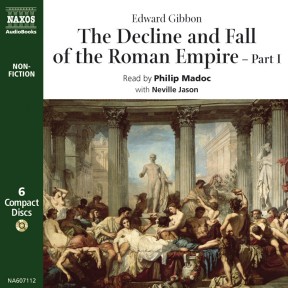 The Decline & Fall of the Roman Empire – Part 1

Gibbon’s The Decline and Fall of the Roman Empire is one of the greatest texts in the English language. In magisterial prose, Gibbon charts the gradual collapse of the Roman rule from Augustus (23 B.C. – A.D. 14) to the first of the Barbarian kings, Odoacer (A.D. 476 – A.D. 490). It is a remarkable account, with the extravagant corruption and depravity of emperors such as Commodus, Caracalla and Elagabalus contrasted by the towering work of Constantine, Julian and other remarkable men. It remains the standard work of scholarship on the subject two hundred years after it was written; yet equally important, in its sheer accessibility, it is an unforgettable story.

No need to ask what I did this summer: Edward Gibbon is not an author to be taken lightly or hastily, which is probably why Naxos got Philip Madoc to read it. His voice has that orotund, authoritative quality (I dare say Moses had it too) that makes you stop whatever you are doing to listen.

It took Gibbon twenty years to complete his famous history; the three volumes were published between 1776 and 1788. This abridgement splits the epic neatly in half, the western empire ruled from Rome and Milan in Part I and the eastern empire, from Constantinople, in Part II. Gibbon’s style, as you would expect of a product of the Enlightenment, is cool, lucid, classical and rhythmic. I urge you to savour the sweeping magnanimity of his opening sentence – ‘In the second century of the Christian era the empire of Rome comprehended the fairest part of the earth and the most civilised portion of mankind’ – because from here on it’s pretty much downhill all the way to May 29 1453, when the Ottomans finally sacked Constantinople.

Ask most people what they know of the Roman empire and chances are they’ll tell you about gladiators, roads, baths, Russell Crowe and a handful of colourful emperors all pre-290 AD whom they have seen fleshed out by the RSC or BBC drama department. Gibbon deals with the post-Augustan empire, those twelve turbulent centuries when its future was constantly under threat from invading Huns, Goths, Persians, Parthians, Mongols and Turks. As fierce as the enemy without was the enemy within. ‘It is almost superfluous to enumerate the unworthy successors of Augustus. Their unparalleled vices and the splendid theatre on which they were acted have saved them from oblivion. The dark, unrelenting Tiberius, the furious Caligula, the feeble Claudius, the profligate and cruel Nero, the beastly Vitellius and the timid, inhuman Domitian are condemned to everlasting infamy.’

Other factors besides barbarians and loose living conspired against the purple: the rise of Christianity and Islam; the increasing power of the Praetorian Guard, who dispensed with emperors as carelessly as swatting flies; the insidious seepage of foreigners into the legions, diluting their fighting spirit. There are awesome descriptions of cities being sacked, palaces plundered, matrons and virgins ‘subjected to injuries more terrible than death’. Virgins had a rough ride in ancient Rome. There are also delicate vignettes of women like Zenobia, Queen of Palmyra, who had a dark complexion and eyes that sparkled with an uncommon fire. ‘When speaking of a lady these trifles become important,’ says Gibbon, whose jokes are strictly limited to maybe one every 300 years. Still, you have to admire a man who can guide you with such elegant dexterity through a millennium fraught with seismic power shifts, where the sheer weight of numbers leaves you reeling: 300,000 Christians hiking through Europe to Jerusalem on the first crusade, 700,000 Mongol horsemen galloping across Asia behind Genghis Khan. Even abridged, Gibbon is no picnic, but he is definitely a meal worth sitting down to. The intermittent extracts from Schumann’s sonorous ‘Julius Caesar’ overture aren’t exactly citron frappé but they help to refresh your palate between courses.

With sweeping grandeur, Gibbon’s masterpiece is enhanced by Naxos’s production, which includes dramatic, classical music and two British narrators whose voices ooze with intellectual authority. The music – often somber – soars into majestic crescendos as the fate of the great Empire is sealed. Between straight readings of the text, one of the narrators announces a summary of the next chapter or two, an abridging technique particularly effective here. Little, if any, of the effect of Gibbon’s accessible and profound prose is lost, even when detail must perforce vanish. A gripping history, this is superbly presented by Naxos.