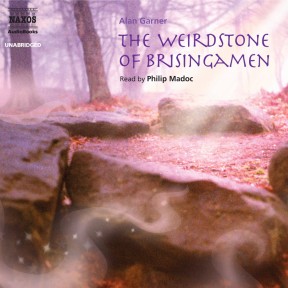 The Weirdstone of Brisingamen

‘The heart of the magic was sealed with Firefrost, the Weirdstone of Brisingamen … should Nastrond destroy the stone, then the magic will die away.’ When Colin and Susan are pursued by eerie creatures across Alderley Edge, the Wizard – Cadellin Silverbrow – takes them to safety deep in the caves of Fundindelve. Here he watches over the enchanted sleep of one hundred and forty knights, awaiting the fated hour when they must rise and fight. But the Weirdstone of Brisingamen is lost and the forces of evil are closing in. The children realise that they are the key to its return, but how can they defeat the powerful magic of the Morrigan and her deadly brood? First published in 1960, four decades before Harry Potter, Alan Garner’s novel of magic and wizards has endured and become a modern classic of children’s literature.

From the first moment of Alan Garner’s classic adventure, The Weirdstone of Brisingamen, when the swirling music of Arnold Bax’s symphonic poems gives way to the deep, rich voice of Philip Madoc, listeners are swept away into a breathtaking story (for over-nines) of wizards and trolls.

Ancient magic and low cunning team up to produce a penultimate battle between good and evil in this high fantasy. Two children, Susan and Colin, arrive in Cheshire and encounter a sinister and peculiar countryside steeped in the centuries-old “Legend of Alderley.” It is said that 140 knights and their milk white mares hover in an enchanted sleep deep in the ground in Fundindelve, the great dwarf-hall. They will awake when England is in dire peril at the last battle of the world. Philip Madoc’s sonorous voice susurrates as his orotund tones increase the tension. His deep voice is perfect for the Wizard Cedellin Silverbrow, and the dwarves and menacing Svart creatures, but he also gives Susan and Colin’s voices a childish courage, as they face the horrors of a frightening chase through dark subterranean tunnels. Madoc exhibits his classical training at the RSC in his use of dialects, guttural pronouncements, and screams as the children and their protectors fight for their very lives. Selections of music composed by Arnold Bax lend an aura of creepy menace and gloom to selected sections throughout.

I found this book and The Owl Service very difficult to read but very easy to listen to. I guess it falls somewhere between The Chronicles of Narnia and Lord of the Rings. It has a sort of local, gossipy feeling to the narrative and the story, though written as a children’s book, is just as captivating whatever age you are. It’s well worth a listen if you’re a fantasy fan. It is one of the few audiobooks that my wife and I listened to together and both enjoyed.

Susan & Colin are adequate as hero & heroine but the real stars are the wizards, shape shifters, dwarves and other creatures that inhabit the dark claustrophobic caves and tunnels of the edge. It is strangely political in places and bears listening to a few times. The story borrows extensively from Celtic, Norse and Arthurian legends, as well as the folktale The Legend of Alderley Edge.

The production, reading and incidental music are all very polished but I found despite playing around with the equalizer settings it’s a bit bassy. So turn your bass down and treble up – apart from that, enjoy the experience.

The Svarts are excellent: ’Golem’ eat your heart out!