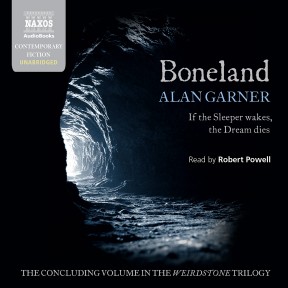 Boneland is Alan Garner’s continuation of the story thread which began in his first and enduringly popular fantasy children’s novel, The Weirdstone of Brisingamen. The Weirdstone was published in 1960 (it has never been out of print since), and The Moon of Gomrath followed, in 1963. This took the story further with the same two children, Colin and Susan. But Boneland is particularly fascinating because it takes the story into adulthood, with Colin again the main proponent. Boneland is read by the experienced actor Robert Powell, at the request of Alan Garner himself. Powell notes that he has ‘known Alan for 40 years – we are old friends, and of course I knew Weirdstone of Brisingamen and The Moon of Gomrath. So I was delighted that after all these years, Alan wrote the sequel – and particularly delighted to be asked to record Boneland. I would have been upset if anyone else had been asked.’ 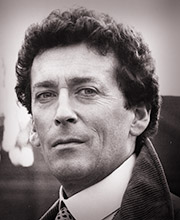 Robert Powell’s portrayal of Jesus in Franco Zeffirelli’s Jesus of Nazareth won him four major international awards and a BAFTA nomination. His other film credits include the vivid characterisation of Mahler in Ken Russell’s film of the composer, Harlequin, Imperative, Tommy, and The Thirty-Nine Steps. His TV credits include the comedy series The Detectives and his extensive theatre credits include Hamlet, Travesties and Sherlock Holmes – The Musical. He also reads The History of Classical Music for Naxos AudioBooks.

I’ve been listening to Boneland while doing my early morning walks through the fields and the woods here at the Kinrowan Estate. It took me just a week to work my way through this amazing work by Alan Garner.

Let’s start off with what Boneland isn’t: despite sharing a primary character with The Weirdstone of Brisingamen and The Moon of Gomrath, beloved children’s novels known as The Adderly Tales that were published in 1957 and 1964, this is very much an adult novel not intended for the pleasure of children whatsoever. Indeed its tone is more akin to what the late Robert Holdstock did in his Ryhope Wood series than anything else Alan Garner has done excepting Thursbitch and Strandloper.

Fortunately I have not read The Adderly Tales, as the two much earlier novels are called. I will listen to them as Naxos has done them as audiobooks because I’m now curious as to how this story started oh so long ago. And I must say that many of the reviewers (and fans of the previous novels) would have been fairer reviewers if they had treated this as the separate work it indeed is.

That primary character is Colin, now fifty years older than in The Adderly Tales, and he’s now convinced he’s going mad. It’s important to add that Garner thinks that The Adderly Tales were ‘very poor on characterization’ as he said in a 1989 interview, but Boneland is not. Indeed Colin and all other characters here feel like real individuals, a result of good writing by the author and superb voicing by the narrator Robert Powell who, as Naxos notes correctly, ‘delivers Garner’s poetic prose with the conviction and understanding that come from being a longtime collaborator with the author. Powell’s Lancashire accent is especially good in the scenes of dialogue between Colin and his psychiatrist, Meg, who is determined to get to the bottom of Colin’s fascination with Celtic magic’.

(Side-note: as with Garner’s The Owl Service, music from the Naxos back catalogue is used here to great effect.)

It is a very tight tale with just three primary characters – Colin, Meg, and an unnamed narrator – living at some point in the distant past. Powell’s voicing is so superb that each feels like an actual individual to me. There’s an echoing effect used on the narration by the third character, which gives a slightly eerie feel.

Colin is either quite mad or has had a very strange life. He is under the care of Meg, a therapist, who is trying to get him to deal with his belief that he has a sister who disappeared when they were still children. Colin thinks he’s insane and Meg thinks he’s not quite there, and she wants him to finally face whatever trauma he’s refusing so far to deal with. Oh and he has an ability to recall literally everything in his life after twelve years and nine months but nothing before that time. Or so he says.

The other story is the life and death of what sounds to be a shaman. It’s an amazing story, which I’ll say nothing about. All you need to know is that it takes place where Colin lives, but that’s true of everything Garner does as his use of true geography in a story is intrinsic to what happens in all his stories including The Stone Book Quartet.

If you hear this story told as it is here and you have not read the earlier novels, you’ll no doubt leave quite puzzled as to what exactly happened. Did Colin have a sister, or did he, as the result of some trauma as a child, just imagine had a sister? Why is Meg so determined to get him to confront his past self?

The ending will surprise you and I’ll not say why, as that’d spoil it for you. I will say that many of those who had read (and deeply loved) The Weirdstone of Brisingamen and The Moon of Gomrath oh so many years ago weren’t terribly happy with this conclusion to the story as it suggests things weren’t as they appeared to be. It’s neither a neat resolution, nor is it an upbeat ending. Garner in the end leaves it up to us to decide what happened oh so long ago.

One final note: this was originally to be voiced by Philip Madoc, a Welshman who had lived in the area of England where all three novels are set. He died in 2011 before he could so. I think the use of a different narrator given the fifty years in time between the first two books and this one actually makes for a better theatre of the mind.

Now I’m off to start my listening to The Adderly Tales. That should be interesting!

Professor Colin Whisterfield is a brilliant astrophysicist. He believes the stars are telling him a story. He reads them like he reads ancient myths and Jungian psychology. Often he hears his sister’s voice calling to him from the heavens. Narrator Robert Powell delivers Garner’s poetic prose with the conviction and understanding that come from being a longtime collaborator with the author. Powell’s Lancashire accent is especially good in the scenes of dialogue between Colin and his psychiatrist, Meg, who is determined to get to the bottom of Colin’s fascination with Celtic magic. In Garner’s Tolkienesque first novels, The Weirdstone of Brisingamen (1960) and The Moon of Gomrath (1963), 12-year-old twins Colin and Susan were whisked into a world of fierce wizards and dwarves. This philosophical finale to the Weirdstone trilogy, featuring the adult Colin, is very much worth the fifty-year wait.