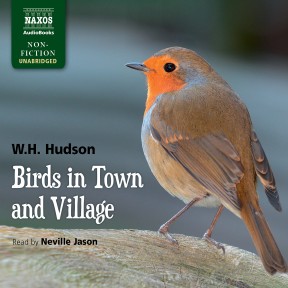 Birds in Town and Village

William Henry Hudson was a founding member of the Royal Society for the Protection of Birds (RSPB). Though born in Argentina, Hudson came to England in 1874, where he remained until his death in 1922. Absorbed by nature, and in particular by the lives and activities of birds, his acute observations on wildlife led to some charming books which helped establish the pastime of bird watching. Birds in Town and Village is one of his classics. It is a truly engaging rumination on birds, as he watched them go about their daily lives. It is unfailingly charming, and read with an easy, relaxed tone by Neville Jason.

Titles by W.H. Hudson
Birds in Town and Village (unabridged)

This is the delightful 1893 classic from W.H. Hudson, a founding member of the RSPB. His memories go back to when five sparrows were sold for three farthings, and linnets, considered a pest, were made into pies. His plea to a hunter is to ‘put aside his fowling piece’ and for women to eschew hummingbird feathers in their hats. His descriptions are charming, his observations of habit and song acute.

Featured large on TV and radio, and loved by the nation, naturalists have become prominent figures in the media. Wearing their knowledge lightly, it is their enthusiasm; their evident love of nature which is their principal message, and which is hugely infectious.

Had he been around at this time, William Henry Hudson would have undoubtedly been in the foreground of media prominence, for he too coupled extensive knowledge, born of decades of observing nature in the field, with a bottomless love for all feathered kind. He is now probably only known to the older generation of the bird enthusiasts, which is understandable.

There is a highly active and imaginative group of bird writers and commentators producing books by the score, far beyond the Collins Complete Guide to British Birds or the RSPB Guide to Birdwatching.

Simon Barnes’s quirky books on birds include A Bad Birdwatcher’s Companion, which is available on Naxos AudioBooks, and both entertaining and informative it certainly is. There are also books by Bill Oddie, Kate Humble and many others.

In a way, W.H. Hudson was the precursor of them all, a pioneer in his field. He loved birds and he watched them all the time, paying minute attention to their habits, their characters and their activities. His books are not dry field guides dedicated to the identification of our island species, but more a celebration of their habits and social lives. He was an early member of the fledgling Royal Society for the Protection of Birds and Chairman of the committee in 1894.

The RSPB was first formed in 1889 by a group of women fired by a specific common purpose. As the RSPB recounts in its history:

In its earliest days the Society consisted entirely of women who were moved by the emotional appeal of the plight of young birds left to starve in the nest after their parents had been shot for their plumes. The rules of the Society were simple:

• That Members shall discourage the wanton destruction of Birds, and interest themselves generally in their protection

• That Lady-Members shall refrain from wearing the feathers of any bird not killed for purposes of food, the ostrich only excepted.

Through his writing and his energy, W.H. Hudson played a key role in the establishment of the RSPB, which now has more than a million members in the UK, more than 20,000 active volunteers and some 200 nature reserves of all different kinds in the UK. Such is its strength that it is also playing an important role in restoring rainforests in Africa and Asia, monitoring threatened albatrosses in the southern oceans and running international schemes to track birds during their migrations.

Now, of course, bird tracking is a hi- tech activity. Thousands of sponsors were able to track five cuckoos: Martin, Lyster, Clement, Chris and Kasper, as they flew across the English Channel, across Europe and over Spain to Africa. Each bird, carrying a solar-powered tracker, had its own blog, and thousands of sponsors followed their birds on the web. They suffered agonies of concern as first one, then another, disappeared from the GPS tracker, only for their signals to re-emerge from behind a mountain, showing they were still flying determinedly on.

They all reached their destination by different routes and arrived at different times. They enjoyed the sunshine in their migration grounds. Then came the time for the return, but alas only two (Lyster and Chris) made it back. The project, organised by the British Trust for Ornithology, was researching data to find out why cuckoos had diminished seriously in the UK.

William Henry Hudson would have marvelled at all this, enjoyed it, and followed each cuckoo with his heart in his mouth like the rest of us. Or would he? Actually, one of the characteristics which emerges from his writing is that, however absorbed he was with the tiny family dramas being played out on that particular blackbird nest in his garden, he was never sentimental. He lived at a time when shooting birds (for food or fun) was regarded as a sport for humans, and the skills of the taxidermist only too often resulted in household ornaments.

Born in Buenos Aires, he was 33 when he came to England in 1871. By that time he was already an experienced ornithologist and Argentine Ornithology was the first principal work of its kind. But it was his books on English birds which really established him as a unique voice in the field. British Birds came in 1895, by which time he had embarked on a pattern of almost a book a year. It was preceded by Birds in a Village (1893) and Lost British Birds (1894), and followed by Osprey; or Egrets and Aigrettes (1896) and Birds in London (1898).

Birds in Town and Village (1919) is vintage Hudson. It was based on Birds in a Village but, 26 years on, he had the opportunity to revise it, adding sections, correcting or re-balancing others – keeping much of the approach but improving it considerably. There is a new conclusion: Birds in a Cornish Village. It was appropriate that he retained his disapproval for the (then) fashionable custom of women to wear feather adornments taken from rare birds. He saw the shift of opinion in his lifetime and his writing helped to make such practices as socially unacceptable then as smoking is now.

Hudson did not restrict his writing to birds. His wider love of nature was expressed by such titles as A Shepherd’s Life, Impressions of the South Wiltshire Downs (1910), A Hind in Richmond Park (1922) and the essay Seagulls in London: Why They Took To Coming To Town published in the same year. He also wrote fiction: Green Mansions: A Romance of the Tropical Forest (1904) was about a traveller to the Venezuelan jungle who meets Rima, ‘a forest dwelling girl’. It was filmed in 1959 with Audrey Hepburn and was also the subject of a radio opera by Louis Gruenberg. It appeared as a comic book in the Classics Illustrated series; and reappeared more recently again in comic form but re-titled Rima the Jungle Girl: she couldn’t speak but communicated in bird-like whistles. Hudson would have been delighted.

But the heart of Hudson’s work, and his real legacy, is the sensitive, alert and fresh manner with which he viewed nature, and particularly birds. He is of his time, of course, though he is unfailingly charming. His work in this area should not be forgotten.