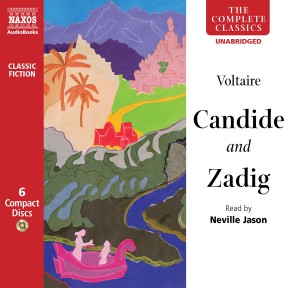 Voltaire’s razor-sharp satire on philosophical optimism Candide is coupled here with another of the author’s most celebrated works, Zadig. Both challenge the moral and philosophical orthodoxies of the day with humour and sly wit, whilst parodying the clichéd formulas of so many contemporary novels. Candide traces the fortunes of its titular character, a staunch optimist who eventually becomes disillusioned by a series of hardships and misfortunes. Zadig likewise follows its main character Zadig, a Babylonian philosopher, as he is subjected to the whims of Fate and the machinations of those around him.

François-Marie Arouet, who later changed his name to ‘Voltaire’, was born in Paris on 21 November 1694, the son of a lawyer. As a youth he was a brilliant scholar, and a great future was predicted for him. On leaving school aged seventeen he was accepted at once into the aristocratic circle which revolved around the French court. His ready wit resulted in his being suspected of writing a satirical poem concerning the Regent, and he was imprisoned for eleven months. This was to be the first of many occasions where his attacks on authority would land him in trouble.

In 1726, having already achieved fame with his play Oedipe, a quarrel with a nobleman resulted in his exile to England, where he remained for the next two years. There he mastered the English language speedily and perfectly, and made the acquaintance of the most eminent writers, philosophers and notable citizens. His Letters Concerning the English Nation bear witness to his admiration for the freedom and justice he discovered in England, which he found notably lacking in France.

Returning from exile he was once again in trouble when the famous actress Adrienne Lecouvreur, who had died at the early age of twenty-eight, was refused Christian burial. His attack on this decision, and the publication of certain works which displeased the authorities, sent him into hiding in the provinces for a time. But some months later he was back in Paris, where his play Zaïre was produced to great acclaim.

In 1733 Voltaire met the aristocratic intellectual Madame de Châtelet . They became lovers and were together for the next sixteen years. When Madame de Châtelet died in 1749, Frederick the Great of Prussia, a great admirer of Voltaire whom he considered his mentor, teacher and friend, succeeded in persuading him to join his court at Potsdam. Voltaire accepted, but gradually they fell out of sympathy with each other, and after two years Voltaire returned to France. The great Lisbon earthquake of 1755, in which some thirty thousand people died, shocked Voltaire profoundly. The poem he wrote in homage and the story of Candide, in which he contests the idea that all is for the best, resulted from the depth of his emotional response to the disaster.

His attacks on perceived injustice made him powerful enemies, including the Church, and from time to time he was obliged to seek refuge abroad in Switzerland. In 1759 he settled in Ferney – in France but very near the Swiss border. From there he continued to attack the cruelty and injustice which flourished in pre-Revolutionary France, to fight for the poor and oppressed, and to champion peace, tolerance and enlightenment. In addition to his writings, he became a highly successful businessman and public benefactor, earning considerable sums of money for himself and his adopted home town.

In February 1778 Voltaire returned to Paris after an exile lasting twenty- eight years. He was now acknowledged as one of the greatest living authors, and he received a tumultuous reception. Thousands of visitors called to welcome the great man.

His play Irène was in rehearsal and he occupied himself with preparations for the opening, which turned out to be a splendid triumph. He attended the Académie français where he was overwhelmed with honours and elected President. But the excitement of these months proved to be too much for his constitution, and on Saturday, 30 May 1778, aged 83, he died.

In England Oliver Goldsmith wrote: ‘We have just received accounts here that Voltaire, the poet and philosopher of Europe, is dead. He is now beyond the reach of the thousand enemies who, while living, degraded his writings and branded his character. Scarce a page of his later productions that does not betray the agonies of a heart bleeding under the scourge of unmerited reproach. Happy, therefore, at last in escaping from calumny! happy in leaving a world that was unworthy of him and his writings!’ Goethe referred to Voltaire as ‘the greatest writer of all time’, and Macaulay wrote ‘Of all the intellectual weapons that have ever been wielded by man, the most terrible was the mockery of Voltaire. Bigots and tyrants who had never been moved by the wailings and cursings of millions, turned pale at his name.’

CANDIDE
Candide is probably the best known and most popular of Voltaire’s contes. This story of the young innocent Candide provides Voltaire with ample means to attack his most hated targets, which he does with the greatest wit, originality and verve.

Candide was Voltaire’s riposte to the philosophy of Rousseau and others, which opines that all that happens in the world is for the best. Voltaire holds this theory up to ridicule by involving his naïve hero in every possible disaster.

Candide is exiled for falling in love with Cunegonde, press-ganged into the army, experiences the hideous cruelties of war, learns of the disease with which Paquette has infected Pangloss, hears of Cunegonde’s abuse at the hands of the Jew and the Inquisitor, commits murder, discovers the misuse of slaves, is cheated of his wealth, witnesses examples of extreme cruelty and the effects of sickness and old age.

Yet Candide is so faithful a follower of Dr Pangloss’s teaching that he persists in maintaining the doctrine that ‘all is for the best in this best of all possible worlds’ in the face of the most appalling proofs to the contrary. Only towards the end of the epic series of adventures in which he and his friends are involved is he able to see the world clearly, freed from the distortion of a faulty philosophy.

Candide comes to understand that our attempts to understand God and the world are doomed to failure, and that in the face of our limited capabilities, all we can do is to lead the best life we can, and ‘cultivate our garden’, that is to say, concentrate on the work in front of us and give up fruitless speculation.

ZADIG
In Zadig Voltaire adopts the style of Oriental tales fashionable at the time. Zadig, like Candide, is an optimist. He expects the good qualities with which he is blessed and his successful achievements to bring him the happiness which continues to elude him. However, unlike Candide, Zadig does not have his head in the sand. He understands the world, and uses his wits to gain advantage or escape from danger in one adventure after another.

He plays dead to prove the perfidy of his lover; he uses his powers of deduction to guess what has happened to the King’s horse and the Queen’s dog (an episode which surely must have been in the mind of Sir Arthur Conan Doyle when he invented the methods of Sherlock Holmes); as a Minister he discovers which son loved his father best, and which man will make the best father to a child; as a slave he wins a court case on behalf of his master and is elevated to become his friend; he advises a ruler how to catch a thieving treasurer and confound his enemies; he cures a glutton with an imaginary basilisk.

As in many romances true love blossoms, but is not allowed to prevail until the hero has proved himself worthy to win the hand of his lady.

Before Zadig succeeds in winning Astarte, Voltaire throws in an enchanting tale in which Zadig is confounded by the incomprehensible behaviour of his travelling companion, a hermit, who eventually reveals himself to be the angel Jesrad, and explains his actions in the light of what he knows, but Zadig cannot. So, once again, Voltaire shows us that we must accept the fate we are unable to understand.

If, unlike Candide, Zadig lacks a single over-arching message and seems to be aiming more to entertain than to enlighten, its protagonist’s magical adventures are related with all the author’s inimitable wit, wisdom and humanity.