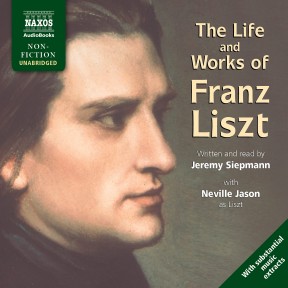 The Life and Works of Liszt

The life of Franz Liszt was as daring and spectacular as his music. Famed throughout Europe as the greatest pianist of the nineteenth century, he was one of the most original and prophetic composers who ever lived. Beautiful in youth, glowering in age, his high-profile love affairs were the talk of the town wherever he went and his generosity to young musicians was legendary. In this account of his epic life, actors’ readings combine with plentiful musical excerpts to paint a living portrait of a highly complex man.

The Life and Works of Liszt is the unabridged audiobook adaptation of a biography of Franz Liszt, possibly the greatest 19th century pianist of Europe. Liszt’s love affairs were nearly as legendary as his passion for music, and his generosity to young musicians earned widespread admiration. A superb portrait of a one-of-a-kind artist, brought to life with the dual performances of author Jeremy Siepmann (formerly Head of Music at the BBC World Service) and Neville Jason, The Life and Works of Franz Liszt is especially recommended for public library audiobook collections.

The life, music, and career of Franz Liszt were equally unconventional and groundbreaking for his time. Jeremy Siepmann’s concise biography defines Liszt’s glamour and mystique, and the accompanying musical selections highlight what was so distinctive and revolutionary in the great composer/pianist’s work. The text, narrated by Siepmann, with Neville Jason reading for Liszt, is well paced and illuminating. Additional voices render contemporary letters and journals. Here, in the most pleasing way, is a two-hour seminar on Liszt and the glories of the piano, and one wouldn’t wish it a minute shorter, or longer. The centre of this production is the musical selections, which pick up their cue from the text and expand our understanding and appreciation of the music for its own sake and for the tumultuous life that produced it – and for life itself, in all its beauty, tumult, and mystery.

In many ways, Liszt was the ultimate Romantic. By comparison, even Schumann seems conservative today, and Chopin, while writing, like Schumann, extra-ordinarily Romantic music, felt himself out of sympathy with almost every aspect of the Romantic movement (the only two composers he loved unreservedly being Mozart and Bach). What they all had in common was the time in which they lived.

A feature
of the Romantic
imagination was
a taste for
extravagance

At the time of Liszt’s birth, the world was changing rapidly, and not only in Europe. The United States was growing fast, the British Empire was expanding eastwards and into the Indian subcontinent, the Industrial Revolution, born in the England of the 1780s, was transforming society at a rate without precedent. As machinery increasingly helped to subjugate the earth, as men acquired powers hitherto regarded as the province of the Almighty, religion itself began to be called into question. With the advent of the Machine Age came increased prosperity. With increased prosperity came an increasing population. Parallel to the Industrial Revolution was a new, commercial revolution. Trade between Europe and Africa, Asia and the Americas expanded dramatically. Communications spiralled outwards and upwards, new roads, the growth of railways, the invention of telegraphy, all introduced a new variety into everyday life, particularly in Europe, the epicentre of commercial expansion. In every corner of the world mankind was in the ascendant. The clear-cut stratifications of 18th-century European society, well-suited to the prevailing logic and principled objectivity of the Enlightenment, with its reverence for design and order, were increasingly supplanted by a new fluidity. Social control was passing inexorably from a long-dominant aristocracy to a rapidly increasing and prosperous middle class. And as music had been an adornment of the ruling classes, so it now became cultivated as a symbol of genteel prosperity by the inexorably rising bourgeoisie. Decreasingly the emblem of a controlling power, it became a potent source of individual expression. As the 19th century advanced, so the cult of the hero gained ground. The Romantic ego became colossal. As humanity increasingly usurped the prerogatives of God, the concept of the one against the many emboldened the previously oppressed. A natural by- product of this was a surge of nationalism which rocked the world through most of the 19th century. Subject nations threw off their shackles, or suffered grievously in the attempt, hence the wave of political revolutions prevailing in Europe at the time of Liszt’s birth and through most of his life.

Music in the Classical era, that is to say most of the 18th century and the early part of the 19th, was based on preconceived notions of order, proportion and grace. Beauty and symmetry of form were objects of worship in themselves and combined to create a Utopian image, an idealisation of universal experience. In the Romantic Age, which lasted from the death of Beethoven to the outbreak of the First World War, this was largely replaced by a cult of individual expression, the crystalization of the experience of the moment, the unfettered confession of powerful emotions and primal urges, the glorification of sensuality, a flirtation with the supernatural, an emphasis on spontaneity and improvisation, and the cultivation of extremes – emotional, sensual, spiritual and structural. Where a near-reverence for symmetry had characterized the classical era, Romanticism delighted in asymmetry. And if there was a rebellion against the tenets of the recent past, there was an almost ritualized nostalgia for the distant past and in many cases an obsession with literature and descriptive imagery. Form was no longer seen as a receptacle but as a by-product of emotion, to be generated from within. While the great Romantic painters covered their canvases with grandiose landscapes, lavish depictions of atmospheric ruins, historical scenes, portraits of legendary heroes and so on, the great Romantic composers, Liszt, Berlioz and Wagner most of all, attempted similar representations – in sound, but not by sound alone. Notes, rhythms, tone colours and melodic fragments were consciously related to specific ideas, to characters and their development. Music took on an illustrative function to a degree never previously attempted. In its cultivation and transformations of folk music (or that which was mistakenly perceived as folk music), it became an agent of the nationalism that fired the souls not only of Wagner and Liszt, but of Chopin, Glinka, Mussorgsky, Borodin, Balakirev, Rimsky-Korsakov, Verdi, Grieg, Brahms, Richard Strauss, Smetana, Dvorak, Albeniz, Granados, Falla, Saint-Saëns, Debussy, Bartok, Vaughan Williams, Sibelius, Charles Ives, George Gershwin, Aaron Copland – all of whom can be considered as Romantics, irrespective of their dates. In the music dramas of Wagner, all arts become part of a whole that is greater than the sum of its parts.

A further feature of the Romantic imagination was a taste for extravagance. Grand opera, particularly in Paris, anticipated the Biblical spectaculars of Hollywood in its heyday, and many of Liszt’s more flamboyant operatic ‘paraphrases’ honoured it in kind. In the symphonic works of Berlioz, Strauss, Mahler, Bruckner and the pre-revolutionary Schoenberg, orchestras assumed gargantuan proportions, while the 19th-century oratorio tradition in England and Germany resulted in choruses not only of hundreds (300 was commonplace) but even of thousands. At a concert in Boston, Massachusetts in 1872, Johann Strauss the Younger conducted an orchestra of 2,000 and a chorus ten times that size (presumably equipped with telescopes). Nor was the humble piano excluded from such excesses. The French composer-pianist Henri Herz was a pioneer of the multipiano jamboree, but was outclassed by the American Louis Moreau Gottschalk, who mounted in Havana, Cuba, a concert featuring no fewer than 40 pianos. This, then, was the world in which Liszt flourished (though he stood apart from the cult of musical elephantiasis), and in which he ultimately failed, writing beyond the understanding of all but a few of his contemporaries. In his final phase as a composer he was quite consciously writing for generations yet unborn.