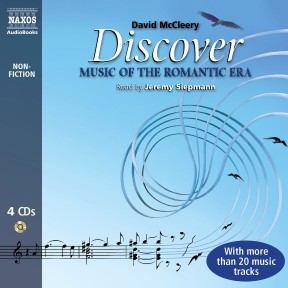 Discover Music of the Romantic Era

Amid a background of wars and revolution, the 19th century produced many of the world’s best-loved composers including Beethoven, Brahms, Chopin and Tchaikovsky. Discover Music of the Romantic Era charts the course of music through these turbulent but exhilarating times with more than 20 music excerpts. Lighthearted but authoritative, it tells the fascinating, often scandalous life stories of the nineteenth century’s greatest composers and describes how they created musical history.

This account of the great Romantics – Beethoven, Schumann, Chopin, Liszt et al – is glorious. It traces how their music evolved from the Classical era, and how their varied backgrounds and often tragic lives produced an explosion of invention and emotion. Illustrated with more than 20 music tracks.

Naxos began in the music business and has an excellent catalogue of recordings to draw on, making this series on the lives and works of composers a natural for them. There’s no need to settle for description when you can hear Joseph Haydn’s actual music. With Audie-winning (for his work on Chopin) author and narrator Jeremy Siepmann and a fine supporting cast, this audiobook introduces us to the life and works—and the relation between the two—of one of the greatest of all composers. The inventor of the modern symphony and the string quartet, Haydn is one of the pillars of concert music, and this original audiobook leads us to a deeper understanding of man and music.

If the Romantics were larger than life it was no coincidence. They affected to be giants even when they were not. Tackling epic subjects at sometimes inordinate length, and using forces that would later make Hollywood look stingy, they were often obsessed with heroism and were prone to regard themselves as heroes (Richard Strauss’s Ein Heldenleben – ‘A Hero’s Life’ – is unabashedly autobiographical). In the Romantic era, however, as in any other, authentic giants were rare. But they changed the world. They also, of course, reflected it.

As the 19th century got underway, the world was changing rapidly, and not only in Europe. The United States was growing fast, the British Empire was expanding eastwards, the Industrial Revolution, born in the England of the 1780s, was transforming society at a rate without precedent. As men acquired powers hitherto regarded as the province of the Almighty, religion itself began to be called into question. With the Machine Age came increased prosperity, and an increasing population. Parallel to the Industrial Revolution was a new, commercial revolution. Trade between Europe and Africa, Asia and the Americas expanded dramatically. Communications spiralled outwards and upwards, new roads, the growth of railways, the invention of telegraphy, all introduced a new variety into everyday life. In every corner of the world mankind was in the ascendant.

The clear-cut stratifications of 18th-century European society, well-suited to the prevailing logic and principled objectivity of the Enlightenment, with its reverence for design and order, were increasingly supplanted by a new fluidity. Social control was passing inexorably from a long-dominant aristocracy to a rapidly increasing and prosperous middle class. And as music had been an adornment of the ruling classes, so it now became cultivated by the rising bourgeoisie as a symbol of genteel prosperity. Decreasingly the emblem of a controlling power, it became a potent source of individual expression. As the 19th century advanced, so the cult of the hero gained ground. The Romantic ego became colossal. As humanity increasingly usurped the prerogatives of God, the concept of the one against the many emboldened the previously oppressed. Subject nations threw off their shackles, or suffered grievously in the attempt, hence the wave of political revolutions that rocked Europe.

If the names of Beethoven, Schumann, Chopin, Liszt, Berlioz, Wagner, Tchaikovsky, Strauss and Rachmaninov still resonate today it is not merely because they were geniuses but because they dealt with and communicated human truths which are eternal. The Romantics, however, were by no means unique in their preoccupation with emotion. Music has always been first and foremost a language of emotion. They were unique, however, in making it in many ways the principal cornerstone of their compositions.

Formless music hardly exists. But for many centuries form and emotion were equal partners. Preconceived structures became established vehicles for emotional expression, and many musical devices emerged carrying specific emotional associations. These provided composers with something approaching a standardised emotional vocabulary. Of the standard structures (or rather formal concepts) of Western classical music, none has proved more intrinsically expressive, or more dramatically powerful, than the so-called ‘sonata form’ that in many ways dominated music from the mid-18th century right into the 20th. This, however, relied heavily on repetition and a certain overall predictability which offended many Romantic sensibilities.

Music in the Classical era (c. 1750–1830) was based on preconceived notions of order, proportion and grace. Beauty and symmetry of form were objects of worship in themselves and combined to create a Utopian image, an idealisation of universal experience. In the Romantic Era (c.1830–1914) this was largely replaced by a cult of individual expression, the crystalisation of the experience of the moment, the unfettered confession of powerful emotions and primal urges, the glorification of sensuality, a flirtation with the supernatural, an emphasis on spontaneity and improvisation, and above all, perhaps, the cultivation of extremes – emotional, sensual, spiritual and structural. Where a near-reverence for symmetry had characterised the Classical era, Romanticism delighted in asymmetry. And if there was a rebellion against the tenets of the recent past, there was an almost ritualised nostalgia for the distant past and in many cases an obsession with literature and descriptive imagery.

Form was no longer seen primarily as a receptacle but as a by-product of emotion, to be generated from within. While the great Romantic painters covered their canvases with grandiose landscapes, lavish depictions of atmospheric ruins, historical scenes, portraits of legendary heroes and so on, the great Romantic composers attempted similar representations in sound – but with a difference. Just as musical figures had once come to symbolise specific emotions, so notes, rhythms, tone colours and melodic fragments now became consciously related to specific ideas, to characters and their development. Music took on an illustrative function to a degree never previously attempted. Instrumental music increasingly took on characteristics of opera, becoming not only dramatic but overtly narrative in character. In its cultivation and transformations of folk music, it became an agent of a nationalism that fired the souls of composers great and small on both sides of the Atlantic. And in the music dramas of Wagner, for which he wrote both words and music, all arts merge into a whole that is greater than the sum of its parts.

A further feature of the Romantic imagination, as noted above, was a taste for extravagance. Grand opera, particularly in Paris, anticipated the Biblical spectaculars of Hollywood, and in the symphonic works of Berlioz, Strauss, Mahler, Bruckner and the pre-revolutionary Schoenberg, orchestras, and symphonies, assumed gargantuan proportions. Meanwhile, the 19th-century oratorio tradition in England and Germany resulted in choruses not only of hundreds but of thousands. As David McCleery emphasises, however, the Romantic era was one of extremes, and equal care and passion was lavished on the smaller forms: the piano miniature, the character piece, the accompanied song. With its variety, its rampant individuality, its focus on feeling and drama, and its often notable disdain for tradition, the age is difficult to pigeonhole. What unifies it most, perhaps, is its spirit of boundless adventure.