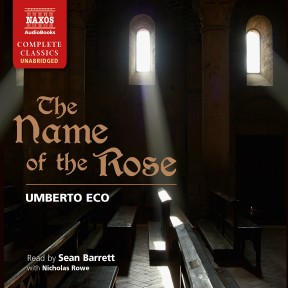 The Name of the Rose

This hugely engaging story of murder, superstition, religious politics and drama in a medieval monastery was one of the most striking novels to appear in the 1980s. The Name of the Rose is a thrilling story enriched with period detail and laced with tongue-in-cheek allusions to fictional characters, the most striking of which is the Franciscan friar William of Baskerville, who displays many characteristics of Sherlock Holmes. Although he looks at the past through a postmodern lens, Eco catapults his readers into the dark medieval world as Brother William tries to discover why people are dying inexplicably and nastily in the monastery. There is something not altogether right within the library that is the pride of the establishment… The old man Adso, who was an impressionable novice at the time, tells the story.

Titles by Umberto Eco
The Name of the Rose (unabridged)

Sean Barrett adopts a reminiscent air as Adso, now an old man, tells of a time when he was a novice traveling with Brother William. Brother William was tasked with investigating charges of heresy at an abbey in 1327 and ended up also solving a series of murders. Barrett deftly handles the Latin phrases and the long passages of church history and politics that are woven into the interviews and inquiries of Brother William. The general tone is reflective of the quiet monastery setting; however, Barrett finds opportunity for artfully varying the pace and attitude. Chapter introductions and the preface are narrated simply and clearly by Nicholas Rowe and Neville Jason, respectively.