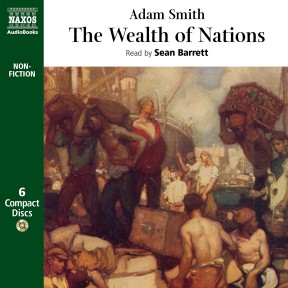 The Wealth of Nations

It was Adam Smith (1723–90) who first established economics as a separate branch of knowledge, and many would say his work has never been surpassed. The Wealth of Nations, which appeared in 1776, is the definitive text for all who believe that economic decisions are best left to markets, not governments. At the heart of Smith’s doctrine is an optimistic view of the effects of self-interest. Though each individual seeks only personal gain, the collective result is increased prosperity, which benefits society as a whole.

One of those seminal texts, along with Magna Carta and On the Origin of Species, that you know about but have somehow never got around to reading. You could cheat by getting P. J. O’Rourke’s witty new crib on Smithian economics, but Sean Barrett’s clear, measured delivery of the real thing makes this famous justification of capitalism versus mercantilism (i.e. guilds, protectionism, the corn laws, etc.) sound so simple. Written in 1776, the year of the American revolution, its influence was enormous and still is. Professor Julian Le Grand of the LSE, a one-time Blair adviser, said that Marx may have been influential, but he was wrong, whereas Smith – currently adorning our £20 notes – had the magic combination of being influential and right.

Less than thirty years ago, received wisdom in the field of economics was turned upside down. Keynes, who had been in, was now out. Central direction by government was no longer respectable. State-owned enterprises were sold off to be run as private companies. The consumer, not the supplier, was king. The market, and only the market, would decide what price anything should command. Laissez-faire was the way to prosperity.

In essence, these were the ideas which drove the economics of Ronald Reagan in the U.S. and Margaret Thatcher in Britain. And when the Berlin wall came down and the Soviet empire disintegrated, even the old communist countries quickly fell into line, queuing up to take lessons from the West in how to demolish centralised planning and encourage private enterprise. Certain prominent economists were given the credit (or blame, depending on your politics) for this dramatic change in thinking: in particular Friedrich Hayek, Milton Friedman and the Chicago School. But to many Reaganites and Thatcherites the greatest hero of all was a man who had died two hundred years earlier – Adam Smith. He, more than anyone, had earned the right to turn round and say, ‘I told you so!’

An Inquiry into the Nature and Causes of the Wealth of Nations, to give his greatest work its full title, is one of those eternal classics of human thought that hardly anyone ever reads. Like Marx’s Capital, it is long, tough and dense. And many people perhaps feel absolved from any need to read Smith now that his ideas have permeated our world so completely that they are all around us. We all think quite naturally in terms of prices and markets, labour and capital; the concepts scarcely seem to require further analysis. And if we want more information, the manifesto of the Adam Smith Institute will surely tell us all we need to know without the trouble of ploughing through the book itself.

Yet the actual words of Adam Smith are far more interesting than the simplified summaries we are mostly offered. Throughout a long work that deals with dry matters in a serious and profound way, he is unfailingly witty, perceptive and illuminating. His view of the world is broad and humane; his arguments are grounded in a comprehensive understanding of history. And he reminds us that the hallmark of real genius is not constructing things that are complex but seeing the significance of things that are simple – so simple that everyone else had treated them as just part of the landscape. The Wealth of Nations is shaped not by ideology but by an honest-hearted search for elementary causes. Its theory is rooted in the most basic facts of our daily lives.

“It is not from the benevolence of the butcher, the brewer, or the baker that we expect our dinner, but from their regard to their own self-interest. We address ourselves, not to their humanity but to their self-love, and never talk to them of our own necessities but of their advantages.”

We all know this; but it took Adam Smith to draw out the full implications. Only humans, he points out, are capable of benefiting one another while pursuing their own self-interest: ‘Nobody ever saw a dog make a fair and deliberate exchange of one bone for another with another dog.’ It is this propensity of ours for barter and trade that leads to improvement. For by a curious paradox, the accumulated actions of many individuals, each one striving only for his own interest, produce a more beneficial result for society as a whole than any overall plan aimed at advancing the general good.

Adam Smith was born in 1723 at Kirkcaldy, in Fifeshire. His father died before he was born, but his widowed mother lived to see her son become famous. At the age of 14 (as was then normal) he went to the university of Glasgow, and three years later went south to Balliol College, Oxford, where he spent the next six years. In those times Oxford offered very little in the way of formal instruction, and students were largely left to fend for themselves. Smith must have made a good job of educating himself, for just a few years after returning to Scotland he became professor of logic at Glasgow. The following year he exchanged this chair for that of moral philosophy, which also included the fields of jurisprudence and political economy – or as we would now say, economics.

In 1759 he had a notable success with the publication of The Theory of Moral Sentiments, but four years later he effectively ended his academic career by taking the job of tutor to the young Duke of Buccleuch. The financial terms were extremely generous: £500 a year, his travelling expenses while touring Europe, and a handsome pension for life when his task was over. It was while staying in Toulouse that he began work on what became The Wealth of Nations. He was by now a friend of David Hume, and after returning to England he was elected to the Royal Society. While in London he joined a social circle that included Edmund Burke, Edward Gibbon and Samuel Johnson. In 1767 he returned to Kirkcaldy, where he settled down to finish his great book.

The Wealth of Nations appeared in 1776 and was instantly recognised as a work of genius. As a mark of respect, Smith was granted the post of Commissioner of Customs for Scotland, a sinecure paying £600 a year. He lived quietly in Edinburgh, with occasional trips to London and Glasgow, where he was now rector of the university. He died in 1790, aged 67. His life had been almost devoid of external interest or incident, and there is no record of any romantic attachment. ‘I am a beau in nothing but my books’, he once remarked to a friend. Nevertheless, contemporaries were impressed by his benign and sweet nature, and a deep and abiding friendship with Hume was a source of mutual pleasure to two of the keenest minds of the age.