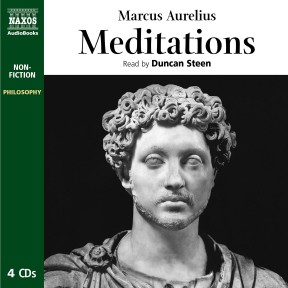 One of the most significant books ever written by a head of State, the Meditations are a collection of philosophical thoughts by the Emperor Marcus Aurelius (121–180 ce). Covering issues such as duty, forgiveness, brotherhood, strength in adversity and the best way to approach life and death, the Meditations have inspired thinkers, poets and politicians since their first publication more than 500 years ago. Today, the book stands as one of the great guides and companions – a cornerstone of Western thought. Translation by George Long revised by Duncan Steen.

Begin – to begin is half the work. Let half still remain; again begin this, and you will have finished. Little is needed to make a happy life; it is all within yourself. The only wealth that you will keep for ever is the wealth you have given away. The sexual embrace can only be compared to music and with prayer. Sex is merely the spasmodic excretion of mucus. No – not my musings, but the sometimes contradictory Meditations (Naxos 4CDs) written down by the stoical Roman emperor Marcus Aurelius. Were they his own thoughts, or a book kept to record what struck him in his own readings. No one knows, but there is no doubt that the Meditations make wonderful audiobook listening, especially when you have set off to pace the hills and escape the conflicting demands of ife. They are read with calm conviction by the Buddhist Duncan Steen.

In the end, you have to make use of what is left to you. Such melancholy resignation is appropriate for Marcus Aurelius, but it also reflects the fact that what we know of his Meditations is limited, and that interpretations are therefore limitless. One result of this is that some philosophers, poets and presidents idolise him for his insights and wise counsel, his book being seen as the father of Pascal’s Pensées; it is alternatively viewed as the father of pop-psychology, New Age mysticism and self-help books (as unhappy a metaphorical paternity as Marcus Aurelius in reality endured with his son Commodus). Interpretation does lend meaning, though. In around 172, Marcus Aurelius’s army was trapped and without water. Then came a terrific storm, which not only quenched the thirst of the Romans and their horses, but effectively routed the opposition. The story at once drew different interpretations: it was the pagan gods; it was magical intercession; it was the Christian God prayed to by those troops who had converted despite the Emperor’s persecution. With the telling of each version, historians questioned the authenticity of the tellers. What hope for certainty, then, with a series of personal reflections?

What is left to us is remarkable enough – or it appears to be. The Meditations comprise the thoughts, considerations, philosophical exercises, opinions and moralising views of a ruler of the Roman Empire (considered by the historian Edward Gibbon to be one of the best). That much seems sure. Thereafter we enter the world of conjecture. The Meditations were probably composed over a period of some years from 170, or from 174 – or possibly begun as much as 20 years earlier. No one knows exactly where and when any of the sequences were written. The first book seems to have been organised by Marcus Aurelius, but the others have not been collated in a similar fashion. The 12 books were published in the mid-16th century from a manuscript that is now lost (another manuscript copy is in the Vatican), and have been hugely popular ever since. The popularity is understandable – not least because it is a head of state who has produced such compelling texts.

The significance of these writings is not entirely understood, however, or at any rate agreed upon. For example, we are not entirely sure to what extent these Meditations are the thoughts of the Emperor. They might just as easily be reworkings of or responses to other texts, a kind of mental exercising to keep the author’s intelligence fresh (he did after all write them in Greek rather than Latin). We can never know how much the translation affects the import and nature of the thoughts. And often enough we can’t be certain what he means – the phrases and ideas are often gnomic or opaque or nebulous. And while we may think it extraordinary that an Emperor managed to compile a book of philosophical enquiry, we don’t know if that itself is true. We do know, however, that Marcus Aurelius was considered a philosopher-king during his lifetime.

He was born in Rome to a prosperous and well-established family who came originally from Iberian Baetica (now part of Spain). By the age of six he had come to the attention of the Emperor Hadrian (it is unknown how this came about), and Hadrian sponsored the boy’s future education with remarkable – even questionable – generosity and preferment. Before he became a teenager, Marcus Aurelius (or Marcus Annius Verus, Marcus Annius Catilius Severus Verus, Marcus Aelius Aurelius Verus, Aurelius Caesar, Caesar Marcus Aurelius Antoninus Augustus … he was known by all these names at one point or another) discovered Stoicism; once freed from the obligations of structured education, he spent much of the rest of his life trying to live up to its ideals.

Having been Hadrian’s ward, Marcus Aurelius was formally adopted by the man who became Hadrian’s successor, Antoninus Pius. He also married Antoninus Pius’s daughter, Faustina. A life of study and enquiry was followed by a life in the political elite in the Senate and as a Consul. More importantly, perhaps, he was a friend and confidant of the Emperor, and effectively shared power with him for over ten years. On Antoninus’s death in 161, Marcus Aurelius himself became Emperor, or rather co-Emperor. He insisted that he share the role with his adoptive brother, Lucius Aurelius Verus. He might have been better advised not to be so scrupulous, since Lucius was not a useful addition during the eight years of joint control before his death.

Marcus Aurelius was a noble, intelligent, peaceful man; he worked assiduously and with integrity for the public good; he founded chairs of philosophy for the four principal schools of thought in Athens. But the relative quietude of his devotion to study and public service was to be tried once he was in power; and some critics feel that his love of books over a keen understanding of realpolitik made his reign harder for everyone.

Under Antoninus Pius (and, to an extent, Hadrian) the Roman Empire had ceased its attempts to expand or violently repress, and instead embarked upon consolidation and internal reform, efforts that Marcus Aurelius attempted to continue. But no Empire is ever free from the pressures of its own existence; there must perforce be those who are the Empire’s unwilling subjects, and Marcus Aurelius’s reign was marked by almost constant wars, revolts and rebellions; in addition he had to contend with a number of natural disasters. There was even a conspiracy to topple him in which his wife may have been implicated. Despite all this, he was mourned deeply on his death, itself largely caused by his relatively poor health and the extremely trying times. He was not helped by having invited his son Commodus to rule with him for the last three years of his reign. Commodus went on to inherit, and became one of the worst of the Empire’s rulers.

The issue of where Marcus Aurelius stands in relation to Western Christian thought is naturally complex. He was a Stoic, essentially Pantheistic, and his persecution of Christians seems to place him in direct opposition to Christianity. Yet his beliefs – that Man has a duty to obey the divine law (or, put another way, to live in harmony with Nature) through its expression in one’s reason; that one should strive to be above the temptation of pleasure or the vexation of pain; to forgive those who cause one injury; to regard all men as brothers – place him remarkably close to the central Christian ethos. This familiarity may be one reason why his words are seen as not just academically interesting but actively relevant today. There is much to be made from what has been left us.