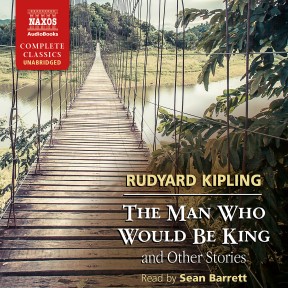 The Man Who Would Be King and Other Stories

In a remote part of 19th-century Afghanistan, two British adventurers pursue their ambition to rule an empire. Using betrayal, threats and guns they win the respect of a primitive tribe and become worshipped as gods, until one day they draw blood and the game is up. The Man Who Would Be King is an action-packed tale about the pitfalls of colonialism and the temptations and evils of power. This volume also includes the stories The Phantom Rickshaw, The Strange Ride of Morrowbie Jukes, The Mark of the Beast and many more.

Sean Barrett’s reading goes beyond narration into performance in The Man Who Would Be King, a novella in Conradian vein. He begins gently enough as the Indian civil servant who recounts his first meeting with Peachey Carnehan and Daniel Dravot, “gentlemen at large”, who are planning to carve out a kingdom for themselves in a remote corner of Afghanistan. Barrett then creates the colourful personalities of the conniving Peachey and the bombastic, red-bearded Daniel before they disappear up country. Four years later Peachey reappears, a “rag-wrapped, whining cripple”, and tells the story of their meteoric rise and even faster fall. Kipling’s storytelling and Barrett’s reading is so immediate that you feel he’s actually in the fanatically idolatrous mountain kingdom, living the perils of the protagonists. Other macabre stories in the collection include The Phantom Rickshaw,The Strange Ride of Morrowbie Jukes and The Mark of the Beast.