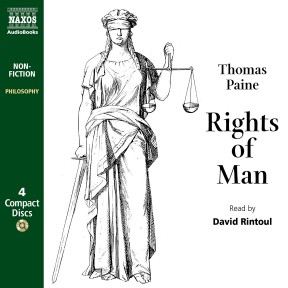 Written in 1791 as a response to Edmund Burke’s Reflections on the Revolution in France, Thomas Paine’s Rights of Man is a seminal work on human freedom and equality. Using the French Revolution and its ideals as an example, he demonstrates his belief that any government must put the inherent rights of its citizens above all else, especially politics. After its publication, Paine left England for France and was tried in his absence for libel against the crown. Authoritatively read by David Rintoul. 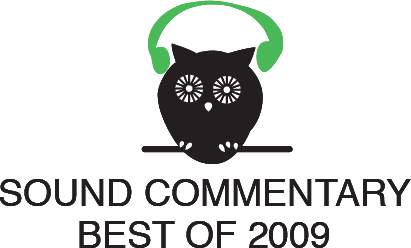 Thomas Paine, born in England in 1737, was a loser as a husband (two failed marriages) and as a worker at diverse jobs. However, in 1774 he sailed for America and found his true calling, journalism. His essay Common Sense galvanized the rebellious colonies and his later pamphlets, The Crisis, inspired the Continental Army. In 1787 he returned to England where he was welcomed by the influential Edmund Burke, who had been sympathetic to the American cause but who despised the French revolutionaries. Burke wrote Reflections on the Revolution of France in 1790, in which he excoriated the French. Rights of Man is Paine’s reply to Burke’s 366-paged, long-winded, aristocratic text. Short, punchy, simple in style and devastating, Part One of his defense of the French Revolution was an instant success. Part Two got him tossed out of England for seditious libel. He fled to France but did no better there, arguing against the death penalty for Louis XVI. He returned to America in 1802 but was denied the right to vote because of a charge of atheism. He died in obscurity in 1809. Rights of Man (1791) begins with comments to George Washington. Paine then describes the events leading up to the storming of the Bastille, the role of the clergy in France, the establishment of religion by law, the useless monarchy, and the revenues of England and France (French finances are far superior). Part Two (1792) is addressed to M. Lafayette and is a “small treatise” on principles and practices, predicting more revolutions because monarchy is on the way out in Europe. Narrator David Rintoul graduated from Edinburgh University and is a noted actor of stage and screen. He gives Edmund Burke a rich plummy reading. Paine’s voice is incisive and direct. Although some of the text is dry (the section on finances, for example), most is filled with reason, logic and irony. These are eternal words of wisdom from a man of principle. Today’s politicians should read them again and again.

Thomas paine was born on 29 January 1737 in Thetford, Norfolk. He was educated at the local grammar school but left aged thirteen to join his father, a Quaker who made stays (corsets) for a living. While still in his teens, Thomas ran away to sea and briefly served on board a privateer (as he relates in Rights of Man). After coming home, he went back to stay-making, married at twenty-two, and passed through a variety of occupations including exciseman and tobacconist. In 1774, after his business collapsed and a second marriage broke up, he sailed for America.

Thus far he had achieved nothing. But in a new country, and with a new profession, Paine found himself at last. He became a journalist, writing on subjects such as slavery, marriage, the British in India, aristocracy and – most importantly – the right of the American colonies to self-defence. Common Sense, an essay he wrote in 1775, electrified opinion. Here was an Englishman ripping the august institution of hereditary monarchy into shreds, starting with the Norman conquest of 1066: ‘A French bastard landing with an armed banditti, and establishing himself king of England against the consent of the natives, is in plain terms a very paltry rascally original.’

Paine was swiftly co-opted by the revolutionaries as propagandist; but a great polemicist does not necessarily make a good politician. Though he held office under the Continental Congress, Paine was prone to lapses in tact and discretion, and the art of accepting defeat with grace was unknown to him. Feeling sidelined and ill-used by the victors, he returned to England in 1787, where he was welcomed by the leading Whigs, including the substantial figure of Edmund Burke. Burke had been sympathetic to the cause of independence in America, which he saw as a justifiable reaction against oppression. Home-grown revolution, however, was in his eyes plain treason, and in November 1790 his Reflections on the Revolution in France set out the case against it in full.

Burke was a magnificent writer, steeped in the tradition of classical oratory. But Paine’s reply to the Reflections, though shorter and lacking its aristocratic style, was devastating. The first part of Rights of Man swiftly sold around 100,000 copies. Most alarming for the authorities, Paine was clearly addressing his arguments not to the small minority of the privileged and the highly educated – who could be trusted to ignore any call for a republic based on the consent of the people – but to the population at large. The language was plain and unadorned, its tone caustic and utterly devoid of the required reverence towards those in high places. When the second part appeared, the government took action. Paine was prosecuted and outlawed for seditious libel – a curious crime in today’s terms, since the offending ‘libel’ was directed not against any person, but only the British constitution.

Paine fled to France, where the power of his name was enough to gain him immediate citizenship, and even election to the National Convention. But he was incapable of trimming to suit the prevailing wind, and in a debate on the fate of the deposed monarch Louis XVI, he stubbornly opposed an irresistible demand for the death penalty. To Paine this was a simple matter of principle: it was the institution that was evil, not the man. From that moment he was under suspicion, and by the end of 1793 he was in prison. ‘My friends were falling as fast as the guillotine could cut their heads off’, he wrote later in The Age of Reason. Why his own neck remained untouched is still something of a mystery.

It was Paine’s fate to lack the easy sociability that, in combination with his achievements, would have allowed him to enjoy a position of honour wherever he went. Outlawed from Britain, and out of place in France under the rule of Napoleon, he returned to America in 1802 to find himself branded an atheist. The charge was inaccurate, but it stuck. In the land that he had helped to gain independence, he was made to feel unwelcome, and denied the right to vote. Even after his death in 1809, recognition continued to elude him. The Englishman William Cobbett, a former critic turned admirer, became so fully converted to Paine’s cause that he had his bones dug up and transported to England for reburial. But fate had decided otherwise – the bones unaccountably disappeared and were never found.

Paine’s beliefs No finer summary of Thomas Paine’s political philosophy exists than these words, from the Declaration of Independence penned by his friend Thomas Jefferson:

We hold these truths to be self-evident: that all men are created equal; that they are endowed by their creator with inherent and inalienable rights; that among these are life, liberty, and the pursuit of happiness: that to secure these rights, governments are instituted among men, deriving their just powers from the consent of the governed; that whenever any form of government becomes destructive of these ends, it is the right of the people to alter or abolish it.

Paine’s belief in a new dawn stemmed from his conviction that nothing can resist the advance of reason and knowledge. Unjust government relied upon keeping a subject people in a state of ignorance; once the notions of equality and natural rights were presented to them, enlightenment would surely triumph. ‘Mankind are not now to be told they shall not think, or they shall not read.’ On this question of the power of reason, Paine was completely at odds with Edmund Burke. The government of an old-established country such as France or England, reasoned Burke – unlike that of America – has developed slowly under a myriad of influences of which we can never be wholly aware. To destroy the product of such a complex process of evolution is folly, since human reason is not sufficient to design a satisfactory replacement. In a later age, Burke would have found the pith of his argument contained in one simple piece of advice: if it ain’t broke, don’t fix it.

Paine came from lower down the economic scale than Burke, and he had more experience of the conditions under which the poorer part of the population – the vast majority – had to live. Their lot, he knew, would never improve until it was recognised that their rights were no less valid than those of the rich, who held a monopoly on power. A few years after Rights of Man, Paine wrote in Agrarian Justice that ‘the most affluent and the most miserable of the human race are to be found in the countries that are called civilised.’ For Burke, such a contrast between affluence and misery was part of the natural order of things, an inevitable fact of human life. For Paine, it was a simple injustice which reason, backed by the necessary resolution, would soon abolish.