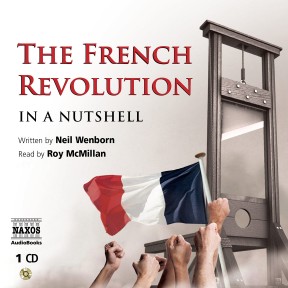 The French Revolution – In a Nutshell

The fifth in the new Naxos AudioBooks series ‘In a Nutshell’, The French Revolution is a short and accessible introduction to one of the most important periods in European history. It brings vividly to life the implacable Robespierre, the frightened Marie Antoinette and the iconic image of the guillotine. But it also demonstrates the key role the Revolution played in the development of European politics.

The bound captives drowned in holed boats in the Seine were just some of the thousands massacred during the years of the French Revolution. This detailed exposition shows how its ideals formed the basis of today’s liberal democracies and how its excesses were a forerunner of 20th-century repressions.

I approached The French Revolution – In a Nutshell unwillingly: it was the last of a pile of promising but soon disappointing titles that I had put in my car for sampling; it smacked of the schoolroom. How wrong I was. At the off Roy McMillan accurately

predicted that all I knew about the French Revolution was derived from Baroness Orczy, A Tale of Two Cities and such famous images as Marat stabbed in his bath. His reading of Neil Wenborn’s canter through the financial and social causes, its violent progress and its significance for democracy is enthralling.

A gripping narrative of quite another kind is to be found in Neil Wenborn’s The French Revolution – In a Nutshell. These cataclysmic events, beginning with the

revelations of France’s lavish national extravagance and iniquitous taxation system, the collapse of the monarchy and continuing through the eruption of political turmoil

into riots, tribunals, terror, military dictatorship and war, are really the foundation of modern Europe. (What price UKIP?) The questions raised seem blindingly

contemporary to us in the modern world – the relationship between citizen and state, liberty and law, idealism and the realms of the possible, political ends and means. Not

very festive, you may think, but this would be a present to treasure whose value will not decline even after years of use.

Between 1789 and 1799, 10 years of violent turmoil in France grew out of Europe’s Enlightenment. After the pillars of power – the Catholic Church, the aristocracy, and the monarchy – fell, continued intramural conflicts stained the decade. In 1799, Napoleon assumed power in a coup and declared the revolution to be over. The author condenses this complex, controversial, and critical period into ‘a nutshell,’ or 75 minutes of audio. British narrator Roy McMillan aptly fits the performance bill with his impeccable French. He chooses a pace that is appropriate to delivering great quantities of abbreviated information while still allowing listeners time to absorb it. His performance succeeds in its succinct reporting of a consequential historical period, and one hopes it will whet the curiosity of those less familiar with these events, inspiring them to further exploration of these murderous times.

The former Chinese premier Zhou Enlai, the story goes, was once asked to comment on the significance of the French revolution. ‘It is too early to say,’ he replied. Happily for us Neil Wenborn is prepared not just to produce a vivid potted history of the political and social events that led to the storming of the Bastille on 14 July 1789 and the purges that followed in Robespierre’s murderous reign of terror but also, unlike Zhou, to assess its longterm influences worldwide. Succinct, entertaining, thought-provoking – everything the perfect history lesson should be.

The French Revolution marked the birth-pangs of modern Europe. The events which convulsed France in the closing years of the eighteenth century, and which plunged the continent into the turmoil of war for a generation, are among the most stirring in modern history. They are also among the most disturbing. A struggle conducted in the name of liberty, equality and fraternity, the Revolution is also a story of repression, injustice and division. The famous opening words of Charles Dickens’s novel of the French Revolution, A Tale of Two Cities, describe the Old Regime France of 1775. But it is unsurprising that they are often quoted in reference to the Revolution itself: ‘It was the best of times, it was the worst of times’.

Few of those who instigated the Revolution in 1789 could have imagined where it would lead. The hundreds of representatives from all over France who gathered at Versailles for the fateful meeting of the Estates-General in May that year had no intention of dethroning King Louis XVI, let alone executing him. Neither did the Parisian crowds who marched on the Bastille on 14 July – a day still celebrated annually in France and French-speaking communities throughout the world. They wanted many things which had been denied them under the Old Regime – a fairer tax system, freedom from the payment of feudal dues, constitutional safeguards against the absolute power of the monarchy – but they would have laughed in derision at anyone who suggested that within four years they would be living in a republic. Still less could they have foreseen the phase of the Revolution now most indelibly printed on our collective memory: the period from 1793 to 1794 known as The Terror. The men (and they were, of course, all men) who swore the so-called Tennis Court Oath at Versailles in June 1789 were well aware that they were making history. They might even have suspected that the colleague, a Parisian doctor and former Jesuit, who suggested the venue (an indoor ‘real tennis’ court) might feature as a footnote to that history. What none of them could have guessed is that his name would come to be associated with the ultimate symbol of the ruthlessness of Revolution. He was Dr Guillotin.

Scholars still
argue about
what actually
happened,
and why

A footnote, nonetheless, he remains. Not so the giants (some might say ogres) of the Revolution – men such as Danton, Marat, Robespierre, and of course Napoleon Bonaparte, to whose military dictatorship the Revolution was ultimately to deliver France and her change-weary people. But the great revolutionary hero of 1789 was none of these. It was Honoré-Gabriel Mirabeau. Mirabeau was typical of the men who transformed a campaign for representation into a crusade for liberty: a nobleman of Enlightenment views and formidable oratory, a man of great political courage and shameless opportunism, whose immense energies found a cause in the struggles of that extraordinary year. And it was Mirabeau who perhaps expressed most clearly the dynamics not only of the French Revolution but of other modern revolutions for which it would provide a template. ‘When you undertake to run a revolution,’ he said, ‘the difficulty is not to make it go; it is to hold it in check.’

The French Revolution remains contested territory. More than 200 years after Napoleon famously declared the Revolution completed in 1799, the cataclysmic events of the preceding decade continue to divide historians and political scientists as sharply as they divided contemporary observers. Scholars still argue about what actually happened, and why. There is even disagreement about when the Revolution began and ended. If its origins have spawned a near-industrial volume of historical research, its legacy has proved still more controversial. Almost everyone agrees that the Revolution was a major force in shaping the modern world. But how it shaped it is another question; and – perhaps inevitably for a movement which first introduced the terms ‘left’ and ‘right’ into political parlance – the answer has often depended on where the observer was looking from.

One of the reasons the French Revolution continues to generate so much heat, in fact, is that we still see so much of recent history through its lens, and vice versa. We look at Stalin’s Soviet Union in the 1930s and we see behind it the Revolutionary Terror of 1793–4. We hear the Jacobins declare the beginning of a brave new calendar in human history and we pick up distant echoes of Pol Pot’s Year Zero. But if we find in the excesses of the Revolution a forerunner of the great totalitarian repressions of the twentieth century, we also find in its ideals the values which underpin today’s liberal democracies and the aspirations which still challenge us in the UN’s Universal Declaration of Human Rights.

Indeed, the issues with which the French revolutionaries wrestled, and by which so many of them were engulfed, remain as live and hazardous today as they were in 1789. They can be thought of as the hammering-out, in the heat of prolonged social and military conflict, of a set of fundamental political relationships: between the citizen and the state; between liberty and the rule of law; between idealism and pragmatism; and – perhaps most resonantly for us, in an age still all too familiar with terror as a tool of ideology – between political means and political ends. Such issues may have the smell of the academy about them. But for millions of ordinary French men, women and children in the 1790s the outcome was a matter of life and death. It remains so for millions today. As Camille Desmoulins, one of the early firebrands of the Revolution and later one of its most prominent victims, wrote to his wife from his prison cell in 1794: ‘I dreamed of a republic that would be loved by the whole world. I could not have believed that men would be so cruel and so unjust.’ The French Revolution, in all its humanity and passion, stands not only for the timeless dream of freedom and justice but also as a terrible warning of how easily that dream can turn to nightmare.