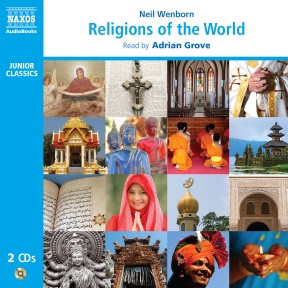 Religions of the World

Religion is central to the lives of millions of people around the globe. But how did the great religions begin, and what do their followers believe? Religions of the World tells the remarkable story of some of the faiths which have helped to shape the way we live today. Aimed at younger listeners, it introduces the history and scriptures, beliefs and customs of some of humanity’s most enduring religious traditions, and looks at their place in the lives of men, women and children across the world. 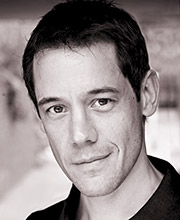 Adrian Grove trained at the Bristol Old Vic Theatre school. He has worked extensively for BBC Radio including Falco, The Archers, The Admirable Crichton and Robinson Crusoe. His theatre credits include Clyde in Dying Breed and MacHeath in The Threepenny Opera at Bristol Theatre Royal, Martin in Newfoundland at Bath Theatre Royal, Arkady in A Month in the Country at the Tobacco Factory, Bristol and Cougar Glass in Fastest Clock in the Universe at the Alma Theatre, Bristol. His film credits include Chris Boardman in The Flying Scotsman (MGM Films) and his television credits include John Nolan in Casualty. He has read several audiobooks. In 2008 he won the Stephen Sondheim Performer of the year award.

A procession winds its way through the streets of an English town, led by five bearded men wearing blue turbans and ceremonial swords. Above an ancient marketplace in Morocco a haunting call to prayer goes out at dawn from a 12th-century minaret. On a riverbank in India millions of people gather to bathe and launch floating candles on the surface of the water.

What do these scenes have in common? And how do they relate to the yellow-robed figure sitting, silent and cross-legged, in front of a centuries-old monument in south-east Asia? What do they share with the eight-branched candelabrum that burns in houses all over the world in the darkest days of winter? Or with the crowds gathered in spring sunshine below the balcony of a great basilica in the middle of Rome?

The answer is that they are all expressions of religious belief – a few of the myriad ways in which, through the millennia, humankind has sought to find meaning in our lives on this planet and in the vast universe beyond it. For thousands of years we have looked at the world around us in wonder and awe. For thousands of years we have asked ourselves how we got here and where we are going. We have seen great pain and suffering, but we have also seen great goodness and love. And we have asked ourselves how best to live our lives in this ever-changing and often unsatisfactory world.

Among the most enduring answers to these questions are the answers we have found in the great religions. Those answers are as varied as the ceremonies and rituals of the religions themselves, and the differences between them have sometimes been a source of bitter conflict. But religious belief has also been a source of comfort and support to countless people throughout the ages, and it continues to be so today.

The origins of religion lie deep in the history of our species. Nowadays we are used to getting news of events almost as they happen. No sooner is there an earthquake or a riot somewhere in the world than we see pictures of it on television or over the internet. Thousands of words are written about it by hundreds of commentators and are broadcast to millions of people around the globe. But it is only in the last few years of human history that this has been the case. For most of our time on the planet we lived in small groups which had little or no contact with people beyond their own communities. Few people could read or write their own language, let alone understand the languages of others. News travelled by word of mouth and very slowly. It is because most religions took shape in times like these that there are often different stories about how they began and what their early followers did and thought. Different people have always had different ideas about these stories and how they should be understood. The scriptures of the different religions are full of wonderful happenings that make us want to ask the question, ‘Can this be true?’ But even this question means different things to different people. For some people it is like asking, ‘Is this wonderful news report true?’ For others it is more like asking, ‘Is this wonderful piece of music true?’

Religions of the World looks at Judaism, Christianity and Islam; at Hinduism, Buddhism and Sikhism; and at Shinto, Taoism and Confucianism. Judaism, Christianity and Islam are sometimes called the Abrahamic faiths, because they all claim descent from the patriarch Abraham, who probably lived some 18 centuries before the birth of Jesus. Hinduism, Buddhism and Sikhism all grew up in India and have since spread around the world. Shinto is the traditional religion of Japan, and Taoism and Confucianism are the traditional religions of China.

In this audiobook we shall hear about how these great religions began and how they have evolved to hold the places that they do in today’s world. We shall learn about their scriptures and what these tell us about the beliefs and hopes of their followers. We shall meet some of the remarkable men and women who have changed the course of religious history and shall see how their insights and devotion have shaped the way people worship and the way they live their everyday lives. And we shall be spectators at some of the inspiring festivals and ceremonies which celebrate key events in the history of the different faiths, or which mark the stages of human life as we move from birth through childhood and adulthood to old age and death.

Different faiths have different understandings of time, and these different understandings are reflected in different calendars. For example, the year Christians call AD 2000 is called 5760 AM in the Jewish calendar and 1420 AH in the Islamic calendar. This means that the traditional Western dating system, which uses BC and AD, actually has its roots in a single religion, Christianity: BC stands for ‘Before Christ’ and AD for ‘Anno Domini’, Latin for ‘In the year of our Lord’. When comparing the history of different religions, therefore, scholars in the West often use the terms BCE and CE instead. CE stands for Common Era and BCE for Before Common Era, but the numbering of the years remains the same – 2000 BC becomes 2000 BCE, for example, and 2000 AD becomes 2000 CE. As the followers of different religions talk to each other and learn more about each other’s faith, this dating system is being used more widely, and it is the one you will find in this audiobook.

Religions of the World is an introduction to some of the faiths which have helped to shape the world we live in today. Wherever you go – from North America to the Far East, from Northern Europe to Sub-Saharan Africa – you will find their living legacy. Their sacred writings, and the events they recount, may have their origins in the distant past; but the faiths remain part of the lives of billions of people across the globe – and for many the most important part of all.