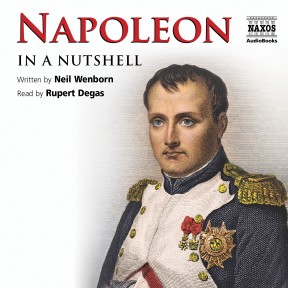 Napoleon – In a Nutshell

Napoleon is one of the giants of modern history. From the last days of the French Revolution to the epochal battle of Waterloo he bestrode the political landscape of Europe like a colossus, and the age to which he gave his name remains one of the most tumultuous in the history of the continent. But who was Napoleon Bonaparte? And why does he still arouse such powerful passions? This audiobook traces the remarkable rise and fall of a man who, as military leader and lawgiver, left his mark on the lives of millions in France and beyond, and whose presence continues to be felt in Europe and the wider world to the present day.

’In our time,’ Napoleon is reported to have said to an aide in 1796, ’no one has the slightest conception of what is great. It is up to me to give them an example.’ Neil Wenborn’s Napoleon – In a Nutshell explores the man behind the myth, not easy when, as his secretary wrote: ’Each of us, without ceasing to be honest, can show a different Napoleon.’ An enjoyable and painlessly informative listen, with Rupert Degas a splendid narrator.

Napoleon Bonaparte is a colossus. He ruled France for less than a decade and a half at the beginning of the 19th century, but his towering presence bestrides the history of Europe to the present day. Among the most documented of all historical characters – his own correspondence runs to some 32 volumes and he has been the subject of thousands of books, articles and academic monographs – he nonetheless remains a semi-legendary figure in the collective consciousness, a warrior-statesman somehow more at home in the world of Alexander or Charlemagne than in the age of Austen and Watt.

That legend is, to a remarkable degree, Napoleon’s own creation. Throughout his career he demonstrated a gift for propaganda that would put many a contemporary spin doctor to shame. His bulletins from the battlefield, designed to present his campaigns in the best possible light, were so effective that they not only shaped contemporary sentiment but have substantially dictated posterity’s view of his military record too. He was one of the first leaders to realise the importance of the popular press in directing public opinion. As a young man on campaign in Italy in the 1790s, he set up no fewer than three newspapers dedicated to boosting his own reputation, and close management of the press would continue to be a weapon in his domestic armoury when he came to power in France in 1799. Napoleon was also alert to the potency of the image at a time of constricted literacy, and the iconic paintings and sculptures he commissioned to celebrate his own achievements have assured him near-universal recognition. Most influential of all are the volumes of table talk and memoirs which date from the final years of his life on the tiny island of St Helena in the South Atlantic. Compiled by his associates in exile and published in the years after his death, they have perhaps done more than anything else to shape the historical record on Napoleon’s own terms.

Even his contemporaries struggled to comprehend the phenomenon that was Napoleon. ‘What a man!’ exclaimed the Comte de Narbonne, who served him as military aide and diplomat. ‘What ideas! What dreams! Where is the keeper of this genius? It is hardly credible. One doesn’t know whether one is in Bedlam or the Pantheon.’ The Abbé Sieyès, one of the founding fathers of the French Revolution and prime mover in the coup that brought Napoleon to power, was equally overwhelmed. ‘Gentlemen, you have a master,’ he is said to have exclaimed as he found himself consigned to the sidelines after the coup. ‘This man knows everything, wants everything, and can do anything!’ Numerous accounts attest to Napoleon’s formidable drive and his almost superhuman powers of concentration and recovery. Watching him in exile on Elba in 1814, Sir Neil Campbell recorded, ‘I have never seen a man in any situation of life with so much energy and restless perseverance.’ That energy was directed equally to military and administrative ends – often at the same time: the day after he defeated the Russian army at the battle of Friedland in 1807, for example, Napoleon dictated a detailed letter on female education. What Henri Clarke, a future Marshal of the Empire, observed of Napoleon’s relations with his soldiery in 1796 could apply equally to his later impact on government: ‘There is no one here who does not regard him as a genius,’ Clarke wrote. ‘His judgement is sure. His decisions are followed through with energy and vigour. His composure under the liveliest of actions is as remarkable as the extreme rapidity with which he can change his plans when unforeseen circumstances demand it.’

Others have left accounts of Napoleon’s breadth of intellect, his irresistible (if selective) charm and his calculated rages. But they also bear witness to his ambition – what one opponent called his ‘insatiable desire to achieve’ – and to his monumental egotism. Even his brother Lucien observed of the 23-year-old Napoleon: ‘I have long discerned in him a completely self-centred ambition that outstrips his love of the common good.’ Years later, Madame de Staël, the quintessential salon intellectual of the age, would write: ‘Himself is the only man he recognises; all other beings are mere ciphers.’ It was a charge Napoleon embraced with pride. ‘I care only for people who are useful to me, and as long as they are useful,’ he boasted on St Helena. ‘What does it matter how they think about me – or what they say?’ It was an egotism with profound political consequences. The first person singular dominates Napoleon’s correspondence and conversation, but he uses it almost as often to mean the army or the nation as to refer to himself. ‘I am the French Revolution,’ he would say shortly before he was proclaimed Emperor; and 10 years later, with the Allied armies closing in on Paris, he bluntly informed the Legislature: ‘You are not the representatives of the nation. The true representative of the nation is myself.’ Increasingly, as victory followed victory, Napoleon would come to regard himself as a force of destiny. Already, after the battle of Lodi in 1796, when he was just 26, he began to think of himself as ‘a superior being.’ Two years later, in Egypt, he warned that ‘all human effort against me is useless, for I succeed in all that I undertake.’ What began as propaganda bled inexorably into belief. By 1804 he was convinced that he was ‘destined to change the face of the world.’

Little wonder, then, that Napoleon has been adulated and reviled in equal measure. Queen Victoria, visiting Paris in the 1850s, made the infant Prince of Wales kneel at his tomb; while for Gustav IV of Sweden he was nothing less than the beast of the Apocalypse. For others, admiration turned to revulsion, especially after 1804 when Napoleon crowned himself Emperor of the French. Most famously, when Beethoven heard the news, he tore up the title page of his ‘Eroica’ Symphony, which he had dedicated to Napoleon, raging: ‘So he too is nothing but an ordinary man! Now he will trample on the rights of mankind and indulge only his own ambition; from now on he will make himself superior to all others and become a tyrant.’ Prescience or prejudice? All such judgements remain as controversial today as they were for his contemporaries. But for Beethoven, as for so many others since, Napoleon’s extraordinary aura never quite ceased to exert its spell. Poignantly, tellingly, the ‘Eroica’ remains dedicated to ‘the memory of a great man.’