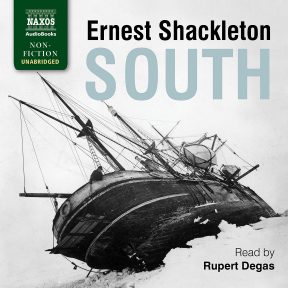 On 8 August 1914, five days after the outbreak of World War One, the Endurance, a wooden-hulled, coal-fired icebreaker, set sail for the South Pole, in a bid to complete the first-ever trans-Antarctic expedition, which would cross the continent from the Weddell Sea to Scott’s base at Cape Evans, via the Pole. However, despite the best planning, the ship succumbs to the ice floes of the Weddell Sea, and is subjected to months of uncontrollable drifting before its crew makes a scramble for Elephant Island, where they battle constant cold and starvation. Faced with the most fearsome terrain and extreme conditions, it is up to Ernest Shackleton, commander of the Endurance, to lead his men back to safety and save them from the horrors of the ice.

Save this audiobook for summer listening. Its great, and true, adventure story of Antarctic exploration will take you to frigid places on a hot day. When their ship was crushed by ice on the Southern Ocean, Shackleton led his entire party to safety across hundreds of miles of open sea more than a year later. Narrator Rupert Degas captures the spirit of the man: hearty, plainspoken, determined, and devoted to the welfare of his crew. His stoicism makes the rare moments of deep emotion – for example, when their ship, Endurance, finally slips beneath the ice – even more affecting. While the scientific appendix may be less interesting to some listeners, Degas enhances it with a variety of voices.