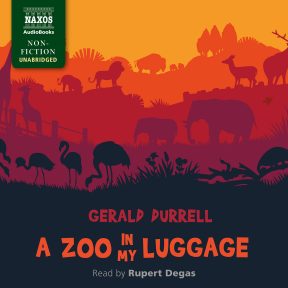 A Zoo in My Luggage

A Zoo in My Luggage is the colourful, first-hand account of Gerald Durrell’s six-month animal-collecting trip in British Cameroon, and his attempts to create his own zoo. Motivated by a passion for wildlife, and a desire to save endangered species from extinction, Durrell assembles a glorious panoply of exotic animals – including a female baboon called Georgina, who later runs amok in a department store; a black-eared squirrel, who tries to bury nuts in his ear; and a gentlemanly chimpanzee named Chumly, who greets him with an outstretched hand. Aided by the Fon of Bafut, who houses the collection (and hosts many long and lively parties), Durrell amasses more than 250 animals. He struggles to find a home for the animals back in England, until a stroke of luck leads him to Jersey, and the eventual founding of Durrell Wildlife Park (now Jersey Zoo).

Dovetailing nicely with the popularity of the British television series The Durrells in Corfu, four of Gerald Durrell’s nature travelogues are now expertly narrated by Rupert Degas. In A Zoo in My Luggage (1960), we join Durrell on a zoo-animal collecting safari in Cameroon. The Whispering Land (1962) follows an expedition to South America. Beasts in My Belfry (1973) harkens back to the author’s experiences near London in the 1940s, and the satisfying fruition of this commitment comes in Durrell’s final book, The Aye-Aye and I (1994), which recounts a mission to Madagascar. Durrell’s enthusiasm for all manner of fauna is ably conveyed by Degas, as is his gift for wry, fanciful description, as when a bush baby’s ‘two enormous golden eyes… looked at me with the horror stricken expression of an elderly spinster who had discovered a man in the bathroom cupboard’. Durrell writes with Dickensian relish, ably assisted by Degas’ tremendous facility with character voices, and with accents that range from West African pidgin to Argentinian Spanish, German, French, Malagasy and parrot. Degas’ skilled impersonations feel authentic and respectful throughout, despite some early paternalistic moments. This feeling lessens as Durrell expresses his concerns not only for endangered species, but also for lost indigenous peoples and cultures. Durrell peppers his prose with tongue-twisting terms in Malagasy, which sounds like ‘someone carelessly emptying a barrel of glass marbles down a stone staircase’. Degas should get a medal for narration under such fire! Less showy than these verbal pyrotechnics but no less masterful is Degas’ interpretation of Durrell himself, droll and slightly posh, with a wry appreciation for the foibles and eccentricities of man and beast alike, anchored by an earnest, clear-eyed sense of kinship with every living thing. Alternately breezy, curmudgeonly, fascinated, and bemused, Degas perfectly captures Durrell’s spirit, and the abundant charm of his literary escapades, which are certain to divert and educate listeners of almost any age.

This clever travel memoir reveals a witty story expertly narrated by the multitalented Rupert Degas. Degas is a kind of verbal ventriloquist at home with the accents, intonations, and styles of the Cameroon natives – royal and commoner alike – and he portrays the very British Durrell quite well, too. His mimicry is remarkable as he recounts naturalist Gerald Durrell’s trip to Cameroon to collect all kinds of animals for his personal zoo and details his many adventures. Listening to this entertaining audiobook is at once an enjoyable experience and a reminder that attitudes towards Africa and Africans were distinctly different in the 1950s, when it was written. Those who can forgive, or at least accept, the colonial outlook of the time will be rewarded.