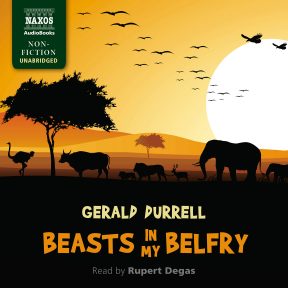 Beasts in My Belfry

Beasts in My Belfry is the wonderfully funny memoir about Gerald Durrell’s time at Whipsnade Zoo and his experiences as a young zookeeper. Following the Second World War, Durrell joined Whipsnade Zoo as a junior keeper – an opportunity that fulfilled a lifelong dream. Thanks to Rupert Degas’s brilliant voicing, which captures all of Durrell’s charm and wit, the listener can enjoy being taken behind the scenes of one of the world’s very first zoos. This is a delightful portrait of the animals who lived there and those who looked after them.

Rupert Degas delivers a bang-up performance – including tiger growls and buffalo snorts – of Gerald Durrell’s colourful and often comic memories of his first job as a student keeper at England’s Whipsnade Zoological Park. Be forewarned that the legendary founder of the Jersey Wildlife Preservation Trust wrote the book in 1970 about events in 1945. While he’s forward-thinking about animal preservation, some references, including ‘red Indians’, are dated and off-putting (even if he clearly admired America’s indigenous tribes more than subsequent European settlers). That said, Degas narrates with zest and believably inhabits everyone from the endearing lady who fed (and fed and fed) our lad to keepers of every personality and accent. Plus, those animals, including the bear who sang duets with the author.