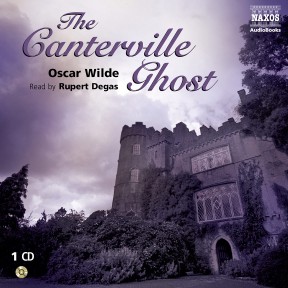 A terrifying ghost is haunting the ancient mansion of Canterville Chase, complete with creaking floorboards, clanking chains and gruesome disguises – but the new occupants seem strangely undisturbed by his presence. Deftly contrasting the conventional gothic ghost story with the pragmatism of the modern world, Wilde creates a gently comic fable of the conflict between old and new. Rupert Degas’s hilarious reading brings the absurdity and theatricality of the story to life.

When it comes to handling ghosts, the characters in Oscar Wilde’s The Canterville Ghost are far bolder than Ebenezer Scrooge in A Christmas Carol. When Marley’s ghost comes rattling his chains, you may remember, the old miser drops his gruffness in the face of his old associate’s awful warnings. Not Wilde’s Hiram B. Otis, an ‘American minister’ who purchases an English country house and moves in with his family despite dire warnings that it is haunted.

The ghost, Sir Simon Canterville – who’s been scaring the daylights out of the house’s inhabitants since his death in 1584 – wastes no time in mounting a haunt. In the dead of night, Otis hears chains clanking in the halls and beholds an awful sight:

Right in front of him he saw, in the wan moonlight, an old man of terrible aspect. His eyes were as red burning coals; long grey hair fell over his shoulders in matted coils; his garments, which were of antique cut, were soiled and ragged, and from his wrists and ankles hung heavy manacles and rusty gyves.

‘My dear sir,’ said Mr. Otis, ‘I really must insist on your oiling those chains, and have brought you for that purpose a small bottle of the Tammany Rising Sun Lubricator.’

Oiling those chains! Rupert Degas is pitch-perfect in the Naxos recording – quite a departure from some of his previous Naxos recordings, including Cormac McCarthy’s The Road and Kafka’s The Trial. The grimness and desperation of those stories is far from the desperation Sir Simon faces with the Otises. No matter what he does, he can’t bloody well scare them! The couple’s twins boys hit him in the knees with pea-shooters, and, when Mrs. Otis hears the ghost’s terrible laugh, her reaction is: ‘I am afraid you are far from well … and have brought you a bottle of Dr. Dobell’s tincture. If it is indigestion, you will find it a most excellent remedy.’

Degas captures the nasally voices of the Americans (for Wilde, Americans are the ones with the accents) and Sir Simon’s exasperated harrumphs – which turn, later, into sighs of relief as somebody finally pities him: the Otises’ daughter, Virginia. Degas gives listeners a hilarious performance that’s an ideal antidote for the shivers if you’ve seen Paranormal Activity.

British actor Degas’ gift for accents and flair for the dramatic make him an excellent choice to read Wilde’s beloved gothic ghost story set in Great Britain. A ghost has been haunting residents at Canterville Chase for centuries. But these poltergeist powers seem lost on the Otis family from America. Degas’ reading is lively, brisk, and laced with just the right amount of foreboding, and he subtly raises pitch during suspenseful moments. Degas gives Mr. Otis the deep, monotone, matter-of-fact tenor of a dull diplomat, while he portrays Mrs. Otis, a Manhattan socialite, in a much higher register, pretentious and pinched. The ghost, frustrated and world-weary over failure to frighten, is appropriately raspy and guttural. Each chapter is introduced by classical music and abundant sound effects – rattling chains, creaking floorboards, thunder and lightning – to greatly enhance the mood. Perfect for a dark and stormy night.

Anyone who is only familiar with the old Margaret O’Brien and Charles Laughton movie version or one of the more recent versions of The Canterville Ghost will enjoy meeting the Otises and the ghostly Sir Simon as Wilde actually envisioned them. When the American Minister to the court of St. James purchases Canterville Chase and is warned of the ghost, he declines to believe in it and says he will ‘take the furniture and the ghost at evaluation.’ As Sir Simon proceeds to haunt (and he has fearsomely haunted before) he comes to believe in him, but he and his family will brook no nonsense. They give him something to oil his noisy chains. The twin sons bedevil him, and the daughter takes pity on him.

Rupert Degas is an excellent narrator with his fine cultured British voice as the present Lord Canterville, the past Sir Simon, and with a pretty good set of American accents for all members of the Otis family, male and female … This is such fun to hear the authentic and brilliant Wilde and it is very enjoyable family listening for all ages.

Children love being told bedtime stories, and Oscar Wilde knew that. In fact, that is how many of his short stories began. He would make them up on the spot for his sons Vyvyan and Cyril, and then polish the tales for publication. The Canterville Ghost, the first of Wilde’s stories to be published, must have had his sons curling up in laughter at each comic moment. Perhaps the two naughty boys in the story, nicknamed ‘Stars’ and ‘Stripes’, who tease the poor ghost, were modelled on Vyvyan and Cyril – warning them of the effects their actions might have on others. Whether this is true or not, his sons must have approved of the story, as it went on to appear serially in the magazine The Court and Society Review in 1887.

However, we can look at The Canterville Ghost as more than just a children’s story, not least because of its inclusion in the 1891 collection Lord Arthur Savile’s Crime and Other Stories. The title story and the others in this collection (The Sphinx Without a Secret, The Model Millionaire and The Portrait of Mr W.H.) are decidedly grown-up. They deal with relationships, mistrust, mystery, deception and death – i.e. not always the kind of subjects that parents would imagine reading to their children. They do not have the softness of tone found in The Rose and the Nightingale and The Happy Prince. So Wilde must have felt that The Canterville Ghost had something to add to this adult collection, and hence it is a story that works on two levels.

Anyone already familiar with Wilde will know that satire imbues his work. No exception has been made here. He upturns the traditional ghost story by mixing the macabre with comedy in describing creaking floorboards and clanking chains with particular irony. Mr Otis reacts to these supernatural occurrences by offering the ghost lubricant for his chains, whilst his sons play mean tricks on him. The ghost loses his sense of authority and becomes vulnerable, so that we ultimately consider him as the hero (the character we sympathise with) and the family as the villains. This is a reversal of the usual roles in traditional ghost stories. Wilde may also be making a teasing social comment, through the English tenants who faint at the ancient superstition and the Americans who are not in the least bit disconcerted by their haunting. Wilde does keep the use of a moral at the end, as fairy tales were used to educate children on cultural and moral values, but it is not an essential element of the story. Whilst an adult may pick up on Wilde’s various themes and techniques, a child may just find entertainment in the satisfying narrative.

Another point of interest is the story’s comparison to A Christmas Carol. Dickens’s Christmas tale was published in 1843 – 44 years before The Canterville Ghost. Was Wilde making reference or poking fun at this Victorian morality tale? Will the consumerist Otis family members meet the same fate as Scrooge would have done if they do not take Sir Simon the ghost seriously? Is Virginia the Tiny Tim who encourages the main character to change his ways? One can only guess. But what is certain is that Wilde embarked upon writing short stories (fairy tales, ghost and detective stories) as a means of securing creative and commercial success, no doubt hoping to emulate the fame of writers such as Conan Doyle. Yet, despite his financial needs, Wilde wished to keep himself above pandering to public opinion and tastes, and so his distinctive parodic style emerged, and can be seen in The Canterville Ghost. His use of parody could be playful, but also subversive, to expose the discrepancy that often occurred between society’s manners and morals.

Yet Wilde’s constant affection towards children cannot be denied – another reason for his decision to write these stories. He wasn’t just making social comments: he was writing for children. After all, innocence allows children to see the truth to which many adults are blind; and Wilde would have liked that.