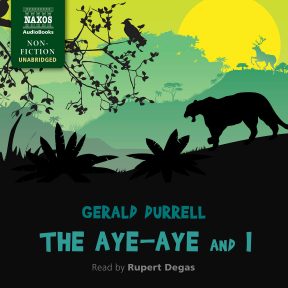 The Aye-Aye and I

Gerald Durrell’s last book, The Aye-Aye and I records his final animal-collecting expedition, a trip to Madagascar in 1990, and his efforts to save the elusive and mythical lemuroid known as the Aye-Aye. Prompted by the country’s radical deforestation, and slash-and-burn agriculture, Durrell, his wife, and their team of zoologists embark on a mission to capture and conserve the species – distinguished by its ‘giant, chisel-like teeth’, ‘round, hypnotic eyes’ and large ‘spoon-like ears’. During the course of their journey, they encounter golden river snakes, flat-tailed tortoises, the gentle lemurs of Lac Alaotra, and the Malagasy chameleons. Durrell’s exuberant descriptions of the island, its people and ecology are among his best.

Oh, the utter delight of adventuring in Madagascar with the late English naturalist Gerald Durrell and his poly-voiced narrator, Rupert Degas, who beautifully channels Durrell’s slightly raspy voice, his exuberant personality, and his enthusiasm for every variety of fauna, including human. The book describes a 1990s trip to Madagascar’s remotest regions to find and collect a breeding population of a mysterious and endangered lemur known as an aye-aye. As Durrell’s team and a BBC film crew endure drenching rain, oven-baked heat, and giant mosquitoes with edifying humour, Degas evokes a wealth of personalities and accents, adding technicolor to the lively writing. Where else, for example, could one meet a hammerhead shark with a mouth reminiscent of ‘Somerset Maugham’s drooping smile’?