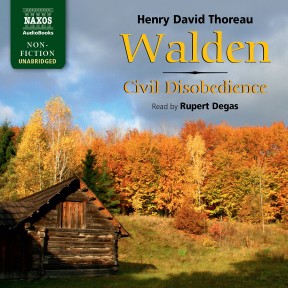 In 1845 Henry David Thoreau, one of the principal New England Transcendentalists, left the small town of Concord for the country. Beside the lake of Walden he built himself a log cabin and returned to nature, to observe and reflect – while surviving on eight dollars a year. From this experience emerged Walden, one of the great classics of American literature, and a deeply personal reaction against the commercialism and materialism that Thoreau saw as the main impulses of mid-19th-century America. Here also is Civil Disobedience, Thoreau’s essay on just resistance to government which not only challenged the establishment of his day but has been used as a flag for later campaigners from Mahatma Gandhi to Dr Martin Luther King.

Like Mary Wollstonecraft’s Vindication of the Rights of Women, Walden is one of those seriously important books I feel I must have read and, if I haven’t, I should, because seriously important people – Tolstoy, Marx, Gandhi – said that it changed their lives. Thoreau, philosopher, abolitionist, environmentalist, is America’s most famous dropout. In 1845, aged 28, he built himself a shack in the woods at Walden Pond, Massachusetts, and spent the following two years putting his philosophy about living a simple life into practice. He has views on everything from civil disobedience to soft furnishings. ‘A lady once offered me a mat, but as I had no room to spare within the house nor time to spare within or without to shake it, I declined it, preferring to wipe my feet on a sod before my door. It’s best to avoid the beginnings of evil.’ You get the drift – there’s not much light relief, but Rupert Degas’s cool, elegant reading, with just a hint of the geeky weirdo lurking as he lists the ingredients in Latin of Cato’s recipe for bread, achieves the impossible. You can’t turn it off.

‘There is no companion as companionable as solitude.’ So wrote Thoreau, who in 1845 withdrew from the increasingly distasteful commercialism of American society and lived for two years in a log cabin he built himself by the shores of Walden Pond.

Eschewing the ‘mean life’ of his fellow men and living on eight dollars a year, Thoreau reflected on the spiritual, on nature and on the shortcomings of mankind. Rupert Degas is an excellent narrator for Thoreau’s mesmerising meditations which are totally captivating – and pertinent.

In 1845 Henry David Thoreau left the town and headed to the countryside. There, beside the lake of Walden, he built himself a simple log cabin and returned to nature. In this perceptive and sometimes moving narration, we hear Thoreau’s deeply personal reaction against the commercialism and materialism of mid-nineteenth century America. A warning from the past which is more than valid today. ‘If a man does not keep pace with his Companions, perhaps it is because he hears a different drummer.’ Let’s hope so, and that there are more Thoreau’s out there today. If not, then this audiobook may go some way to inspiring them.

‘If a man does not keep pace with his companions, perhaps it is because he hears a different drummer. Let him step to the music which he hears, however measured or far away.’

‘I am a Schoolmaster – a Private Tutor, a Surveyor – a Gardener, a Farmer – a Painter, I mean a House Painter, a Carpenter, a Mason, a Day-Laborer, a Pencil-Maker, a Glass-paper Maker, a Writer, and sometimes a Poetaster.’ So wrote Henry David Thoreau.

But he is remembered for his two extraordinary years of reflection while sojourning in nature, and his account of it, Walden. Although it had little impact during Thoreau’s lifetime, Walden is now recognised as one of the great works of American literature, a sensitive but clear essay on life and living in nature, informed by an abiding interest in classic literature and philosophy.

Henry David Thoreau was born in the village of Concord, Massachusetts, in 1817, into an unremarkable family. His father owned a pencil factory. Henry revealed academic potential early, and went to Harvard to study ‘navigation’ (as he says in Walden), but spent much of his student years in the library, pursuing his own vicarious literary interests. On his return in 1837 he became a teacher at the Concord Academy – for two weeks. His sensitive, poetic temperament was not suited to keeping boisterous pupils in order. He left to join his father in the pencil-making business. The following year, in 1838, he started a school with his brother John, putting into practice his more progressive ideas about education. John’s growing ill health forced closure, however.

In 1839, together with John, he went on a canoe trip down the McCormack and Concord rivers. This was a key experience, crystallising his need to combine his interests in nature and writing. It resulted in the publication 10 years later of A Week on the Concord and Merrimack Rivers.

He built a small
cabin and, dwelling
in nature, read and
observed, living on
food that he
could gather

By this time he had formed a close friendship with the poet and essayist Ralph Waldo Emerson, who was prominent among the Transcendentalists (and who by coincidence had settled in Concord). In this movement, and particularly in the fatherly figure of Emerson, Thoreau found an external, eloquent voice which accorded with his inner feelings: the concern for the individual vision, the emphasis on living with an awareness of nature, and the elevation of intuition over reason in dealing with life.

It was the vision that Thoreau craved, one that provided a stance against the growing commercialism and materialism that he found everywhere in the burgeoning American society. Prompted by Emerson, Thoreau started a diary and wrote copiously. He began writing for The Dial, the Transcendentalist magazine, producing essays, reviews and poetry. It was here that his first writings on nature appeared. Between 1841 and 1843 Thoreau lived mainly with Emerson, his wife and children. It was a difficult period for Thoreau. His brother John died of lockjaw, and his time spent on Staten Island (with the family of Emerson’s brother William) trying to establish himself as a poet in a more metropolitan society failed.

Thoreau went back to Concord, and to his father’s pencil factory. And then early in 1845, he decided to live alone in the countryside. Emerson owned some land two miles outside Concord, by a small lake named Walden Pond – and Thoreau, now aged 27, found it ideally suited to his purpose. There he built a small cabin and, dwelling in nature, read and observed, living on food that he could gather, and beans that he grew. This living in nature, all senses alert, combined with his background in classic literature and philosophy and a sense of spiritual purpose, produced Walden.

Thoreau spent two years by Walden Pond – not exclusively, for he returned to Concord from time to time. When he left his cabin finally, in 1847, he went back to stay at the Emerson home while Emerson was away in Europe. And gradually he accustomed himself to more conventional society. He took charge of his father’s pencil factory though it never became particularly profitable; he developed a reputation as a reliable surveyor; he made other naturalist trips.

But he also became involved in a variety of causes, principally the abolition of slavery. He supported the Underground Railroad, the clandestine movement that helped runaway slaves reach Canada and freedom. He admired John Brown, the anti-slavery campaigner, who was hanged for the debacle at Harper’s Ferry. Thoreau’s decided political views led to his essay Civil Disobedience. Originally published as Resistance to Civil Government, in 1849, just a year after the revolutionary turmoil in Europe, this essay grew out of a series of lectures called The Rights and Duties of the Individual in Relation to Government which he had given the year before at the Concord Lyceum. In Resistance to Civil Government Thoreau argued that citizens had a duty to resist a government that was in the wrong, and its most famous sentence is ‘the government is best which governs least.’ After his death the essay was reprinted as Civil Disobedience, and it went on to be used by campaigners as a justification for opposing established government. Among its champions were Mahatma Gandhi and Dr Martin Luther King.

However, it is for Walden that Thoreau is principally remembered. He had continued to work at his writings and memories of his time at Walden Pond and in 1854 Walden was finally published. Even though it wasn’t immediately a critical success, it did reach a select circle. In 1855 George Eliot, in London, praised it in a review in the Westminster Magazine, commenting on its ‘deep poetic
sensibility’ and remarking on its ‘unworldliness’.

When A Week on the Concord and Merrimack Rivers was published in 1849, 1,000 copies were printed. A mere 100 were sold, 75 were given away, and in 1853 the publisher dumped 706 copies on Thoreau’s doorstep. Walden fared better – the initial print run of 2,000 was sold within five years – but it was only in the 20th century that it achieved status as a classic in its own right.

Thoreau died, probably of tuberculosis, in 1862, at the age of 44. It was said that he went out into the woods to count tree rings, and caught a bad cold. He was buried in Concord. His cabin didn’t last much longer. After Thoreau had left, Emerson bought the cabin and sold it on to his gardener, Hugh Whelan. It started to fall into disrepair, and in 1849, a farmer who purchased it moved it to his farm where it was used to store grain. In 1868 the roof was used to make a pigsty and in 1875 the last pieces of timber shored up a barn. However, a replica has now been built and can be viewed, by Route 126, on the original site by Walden Pond.