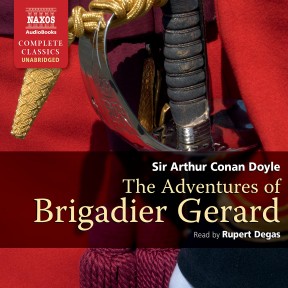 The Adventures of Brigadier Gerard

With a horse between his thighs and a weapon in his grip, the dashing Brigadier Etienne Gerard, Colonel of the Hussars of Conflans, gallops through the Napoleonic campaigns on secret missions for his beloved Emperor and his country. He encounters danger and hair-breadth escapes but never loses his bravado, his eye for a pretty girl, his boastfulness or his enormous vanity. Gerard is Conan Doyle’s most lovable character. At times hilarious, at times touching, these stories are amongst Conan Doyle’s most popular.

Sir Arthur Conan Doyle may be best known for his Sherlock Holmes stories, but they were not his favorites. He loved the stories that promoted the chivalric ethos, even if they sometimes made fun of their heroes, as here. Gerard is a cavalry officer who is devoted to Napoleon and is incapable of seeing the world through any other lens. Rupert Degas is reliably excellent as the ego-inflated officer who fails to see the differences between French and English values, remaining fully confident through what most of us would consider the most embarrassing situations. But Degas never loses touch with the man’s innate courage, grace, and devotion to his principles.

Naxos Audiobooks continue to revive some long forgotten works by that genius writer of detective fiction, Sir Arthur Conan Doyle. This time it is ‘The Adventures of Brigadier Gerard’ – a swashbuckling set of stories set in the Napoleonic Wars and including some pretty far fetched plots. Rupert Degas is the ideal reader for this type of narrative – his French sounding inflexions are truly a delight to listen to especially in the more tender parts of the tales. The seven hours of stories may be slightly heavy on the ear so it is advisable to take them one at a time but with the well chosen interludes taken from similarly swashbuckling Berlioz overtures, you really cannot miss out. I particularly enjoyed the action packed part on the capture of Saragossa as well as the final part on Waterloo with Degas truly in his element describing the bloodthirsty scenes of battlefield carnage. Yet another winner from the astonishingly diverse Naxos Audiobooks stable.

Sir Arthur Conan Doyle is best known for his Sherlock Holmes stories. But he is also the creator of Etienne Gerard, a calvary officer in the armies of Napoleon. The Adventures Of Brigadier Gerard is a collection of colorful (and often humorous) stories of Gerard’s missions during the Napoleonic Wars ranging from Spain and Italy to England and Russia. The Adventures […] are deftly and dramatically narrated by Rupert Degas who does the storytelling talents of Sir Arthur Conan Doyle full and complete justice. […] a technically flawless audio production. The result is pure entertainment and the highest possible recommendation for personal and community library audio book collections.

In 1894 Arthur Conan Doyle committed murder: he brutally killed off the famous detective Sherlock Holmes. A fictional ‘murder’, it’s true, but the outcry from the reading public was so enormous that Conan Doyle may well have thought he had done the deed in reality. Young men went into mourning for their hero, wearing black armbands, whilst women wrote abusively to the author, calling him ‘a savage’. Although Conan Doyle was later to realise he had killed the goose that laid the golden eggs, he was pleased at the time to have got rid of the troublesome detective, who had, in his opinion, kept him from his serious work: writing historical novels. He could not have known that before the year was out he would create another hero, second only to Holmes but very different from him, a hero who would endure as one of his most popular creations, and not in a serious literary vein at all.

It was during a dinner conversation with the novelist George Meredith in 1894 that the seeds of Conan Doyle’s new creation were sown. Both men had a passionate interest in the Napoleonic era, Conan Doyle since boyhood, and Meredith drew his attention to The Memoirs of General Baron de Marbot. Marbot was a brave and fearless soldier in Napoleon’s army, and recalled, in one thrilling incident of many, how he volunteered for a dangerous mission: ‘“I will go sir!” I cried without hesitation. “I will go; and, if I perish, I leave my mother to your Majesty’s care.” The Emperor pulled my ear to mark his satisfaction.’ If Marbot were fictionalised, Meredith suggested, would he not make a most entertaining character?

The stories, whilst
lampooning the French
national character,
also display the
idiosyncrasies of
the English

Marbot was a man full of his own conceit, but Conan Doyle’s creation, Brigadier Etienne Gerard, Colonel of the Hussars of Conflans, far surpasses the original. As he himself repeatedly tells us, he is the idol of the ladies, a superb swordsman without equal (‘I fought the men and kissed the women in fourteen separate kingdoms’), heroically brave (‘For the moment I was magnificent’), loves danger, and places honour above everything. At the same time, we perceive that he is inexpressibly vain about his appearance (‘I give my moustache the old Marengo twist’), lacks any self-irony, sometimes misses the obvious when it is staring him in his handsome face, and is always splendidly ridiculous. However, his naivety, his constant good nature, even when he is under difficulties, his optimism (‘Is not every hour a fresh point of view?’), his hearty patriotism and love for his Emperor touch our hearts and in the end we cannot help but like him. ‘Vive L’Empereur!’ he cries with all his heart and soul, ‘Vive Etienne Gerard!’ we reply.

The Brigadier is part of a long tradition of heroic Gascons in French literature. D’Artagnan declares himself to be ‘Proud as a Gascon’, in Alexander Dumas’s The Three Musketeers; and the legendary Gascon, Cyrano de Bergerac, in Edmond Rostand’s romantic play, resembles Gerard, being a little ridiculous yet fearlessly brave. Gerard himself may have inspired the character of Flashman, created over 60 years later by George MacDonald Fraser.

True to form, before setting pen to paper Conan Doyle embarked on a course of meticulous research into the Napoleonic era. ‘My military detail was, I think, very accurate,’ he wrote proudly. The campaigns of Napoleon provided real events that Conan Doyle skilfully adapted to feature his hero. The Exploits and Adventures cover the period from Gerard’s first meeting with his Emperor in 1807 to the death of Napoleon on St Helena in 1821. Most of the episodes deal with the Wars between the years of 1808 and their culmination (the battle of Waterloo in 1815). But war is only the background to the feats of individual bravery performed by the Brigadier, who gallops through the pages on clandestine missions, assailing dark castles and fortified cities, inevitably getting caught by the enemy, and barely escaping with his life. He even gets apprehended by the Duke of Wellington, and is incarcerated in Dartmoor prison.

The discipline of the short-story genre worked to Conan Doyle’s advantage. There is no space for reams of carefully researched historical detail to be included, which clogs up the action in his historical novels. In Brigadier Gerard the action comes first and the history second, and this streamlined effect has stopped these stories becoming stale for succeeding generations.

The stories, whilst lampooning the French national character, also display the idiosyncrasies of the English. Conan Doyle, despite always appearing to be an English gentleman, was by birth a Scot, and took the opportunity to settle the score with the English for jokes made at the expense of his countrymen. His English military characters, mostly from the upper classes, are charming, tender, heroic and eccentric. they treat war like a game, and will take any opportunity to lay a bet or back a wager: ‘sport before war’ seems to be their motto. Such a one is Bart in How the Brigadier Held the King (Exploits): he captures Gerard, and then plays cards with him for the Brigadier’s freedom. Elsewhere, Conan Doyle makes fun of the English obsession with cricket and boxing, two sports he actually enjoyed and took rather seriously himself.

But compared to the French esprit de corps epitomised by Gerard, the English are characterised as a bit dull and plodding. And it is in this contrast of nationalities that the humour lies.

Conan Doyle had intended to write a serious novel about the Napoleonic era, examining the Emperor. Instead he created a comic masterpiece. Again (as with Holmes) the public seemed to prefer his less serious work. The irony was not lost on him. Conan Doyle wrote to his mother in 1895: ‘I should not be at all surprised to see the Brigadier become quite a popular character – not so much as Holmes, but among a more discriminating public.’ A year later, warming to his unexpected success, Conan Doyle wrote again to his mother: ‘It is pleasant to see so many people fond of him – for I was a bit fond of him myself.’