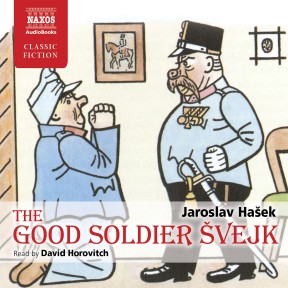 Jaroslav Hašek’s world-famous satirical farce The Good Soldier Švejk has been translated into over sixty languages, and is one of the best-known Czech works ever published. A soldier in the First World War who never actually sees any combat, Josef Švejk is The Good Soldier’s awkward protagonist – and none of the other characters can quite decide whether his bumbling efforts to get to the front are genuine or not. Often portrayed as one of the first anti-war novels, Hašek’s classic satire is a tour-de-force of modernist writing, influencing later writers such as Hemingway, Faulkner, and Joseph Heller.

Every harassed negotiator, every beleaguered political wife and anyone given to ever-increasing moments of melancholy at the way things are should keep a copy of Hašek’s classic ‘don’t let the bastards get you down’ novel to hand. It’s anti-war, anti-establishment, anti-religion and – praise indeed – even funnier than Catch-22. Joseph Heller based his hero Yossarian on Švejk. Hašek, born in Bohemia in 1883, based the irrepressible Švejk’s career in the first world war on his own rackety life. Horovitch’s multi-voiced, multi-accented reading of the hotchpotch of characters is brilliant: dotty major-generals, hard-drinking priests, lecherous officers and, of course, the good soldier himself, beginning every exchange with ‘Beg to report, sir . . .’ – that he joined the enemy by mistake, missed his train, lost his way, issued the officers with the wrong cipher book (part 1 of Ludwig Ganghofer’s The Sins of the Fathers instead of part 2), and so on. Give it five minutes, you’ll be hooked.

Jaroslav Hašek was a natural satirist, a man with no sense of belonging but a keen awareness of the absurdity of the times in which he lived. He laughed where empty despair might have been a more rational response; was a prankster, anarchist, Communist and joker; was irresponsible and drank to excess. But he created a new genre, and in Švejk, a new hero; one who was able to point up the grotesqueries of his world in a manner that is still as pertinent today – and, importantly, still as funny.

The idea of an anti-war novel seems rather obvious now; books like All Quiet on the Western Front, Goodbye to All That, Slaughterhouse Five and perhaps most especially Catch-22 are so much a standard part of the canon that it is difficult to imagine a conflict (or a library) without them. And there is of course a long history of anti-war sentiment in songs, poetry and drama, either directly – by opposing a particular event – or indirectly, by looking at the effect war has on the combatants and their friends, lovers and families. The First World War – for English-speakers, certainly – has almost become the property of poets, such was the power of Sassoon, Owen and their literary comrades in bringing the truth of its nature to the readers at home. Equally, the notion of the wise fool has a history almost as long as literature itself, with Voltaire’s Candide and perhaps Sancho Panza as the forebears of Švejk.

But Hašek’s stories predated all the other novels of its type, and created a central character that can be traced from these ancestors, but is less easy to define. Švejk is obedient but cunning, bumbling but knowing, patriotic but self- serving, duplicitous yet charming. Just how innocent is he? He is a kind of Everyman, but also a catalyst illuminating the stultifying, inhuman bureaucratic mess that was the army (quite apart from war itself). Hašek was angry at what the soldiers were being made to do, and more than aware of the craven nature of the officers; in his series of tales about the innocent Švejk he made his readers laugh at what they knew to be only too true.

Hašek was born in Prague in 1883. For centuries before Hašek’s birth it had been an area fought over by combating empires and continued to be so for some time afterwards. At Hašek’s birth it was part of Austria-Hungary, a new name for an old Empire that was struggling to hold together its constituent parts. When he was born, the world was on the brink – or perhaps precipice – of monumental change, and Hašek was alive to the profound social shifts threatening Europe. But there were some equally profound shifts to be accommodated at home first. His father was an alcoholic maths teacher, and the family was extremely poor, often having to move house when he was a child. This instability was made far worse when the father died, and Hašek’s mother could not cope with her ill-disciplined son. He was taken in by a pharmacist, finished his education early, trained briefly to follow in his foster-father’s steps, became (again, briefly) a bank clerk, but found himself drawn, perhaps inevitably, to a less structured life; although Hašek’s lack of structure amounted to something nearer fracture. He was a dog salesman, involved in stealing dogs and forging pedigrees – both of which his later character Švejk would also do – but for a time was essentially a vagabond. He gradually moved towards becoming a journalist, an editor and a short-story writer; but also a fraudster and hoaxer (he was sacked from a magazine about animals because he invented some of the entries), a cabaret performer and a jesting, political figure. But it was not just his endless moving that he carried from childhood into adult life. He, like his father, drank heavily.

He was outside almost every aspect of the social and political establishment, and his politics perfectly mirrored his nature and his attitude – a kind of satirical anarchist, or ironic Communist. As a result, he was frequently the subject of the attention of the police, and went to jail several times. On one occasion, aware of the attention his political activity had occasioned, he and some similarly- minded friends created The Party of Moderate and Peaceful Progress Within the Limits of the Law and put Hašek forward as their candidate in 1911. The group was a party in another sense – the funds raised for it meant that Hašek and his friends could carry on drinking at the pub where they met.

But by then he had started to focus more on his writing, and was editing an anarchist journal. This was in part because he had married; but here too he was restless – the marriage was not a success and ended, though not formally, after three years. Hašek lived for a time with Josef Lada (the man who would eventually illustrate Švejk) and when the war came, he was drafted into the Austro- Hungarian army. When he was captured by the Russians, he was eventually allowed to join a volunteer regiment to fight against the Austro-Hungarians, and was employed as a propagandist. After the war, he stayed in Russia and became a Bolshevik; but found the regime there even more repressive than the one in what had by now become Czechoslovakia, and he returned to his homeland. He had also married again, without troubling any lawyers with the formality of divorce proceedings.

Although Švejk had made an appearance in his short stories before the war, it was in response to Hašek’s experiences in various armies that the character took full form. Hašek had always written quickly. His sarcasm, hyperbole, caricaturing, parodies and irony seemed to flow easily in response to the brutal confusion all around him: the collapse of the Austro-Hungarian Empire, the revolution in Russia, the end of the old order throughout much of Europe, and the new systems imposing their new subjugation. But he was already extremely unwell. He was very overweight and had contracted tuberculosis, as well as continuing to drink heavily. He had to dictate most of the tales that make up The Good Soldier Švejk, and even then could not finish the task before he died in 1923. The tales were hard to publish – after all, Hašek was a traitor and a bigamist. But they were written in Czech rather than German, which made them accessible; and they were scatological in their satirical attacks on the incompetence and hypocrisy of the ruling classes, which pretty much guaranteed them popularity.

But Hašek created something more than a folk-hero for the Czechs, although that would be achievement enough. He can also be counted among the first modernist writers, taking his wide- eyed anti-hero through the horrors of a life lived at the behest of the State machinery, both civilian and military. He does this using language that is at once immediate and approachable but also witty – parodying the manners of lawyers, priests, soldiers, officers and doctors, propaganda and government double-speak. At the same time, there are moments of casual horror, made all the more startling by the objective calm he uses to describe them. Hašek can rightly be placed alongside authors like Kafka in the development of European literature, placing the hero and his human concerns in the path of the bureaucratic juggernaut. But he also deserves a place beside Cervantes, Voltaire and Rabelais for creating a true survivor who still manages to relish life both for and in all its absurdity.