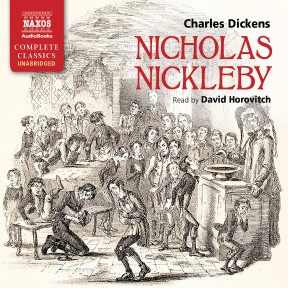 Left penniless at his father’s death, Nicholas Nickleby and his mother and sister turn to their wealthy uncle Ralph for support. But Ralph is a cruel usurer who despises Nicholas’s open-hearted character and despatches him to teach at Dotheboys Hall, run by the grotesque Wackford Squeers. Appalled, Nicholas rebels against the cruelty there and determines to take care of his family and his new friend, the helpless and abandoned Smike. Brimful of brilliant comedy, peopled by scores of memorable characters and touched by powerful satire against injustice, Nicholas Nickleby established Dickens as the finest novelist in English. 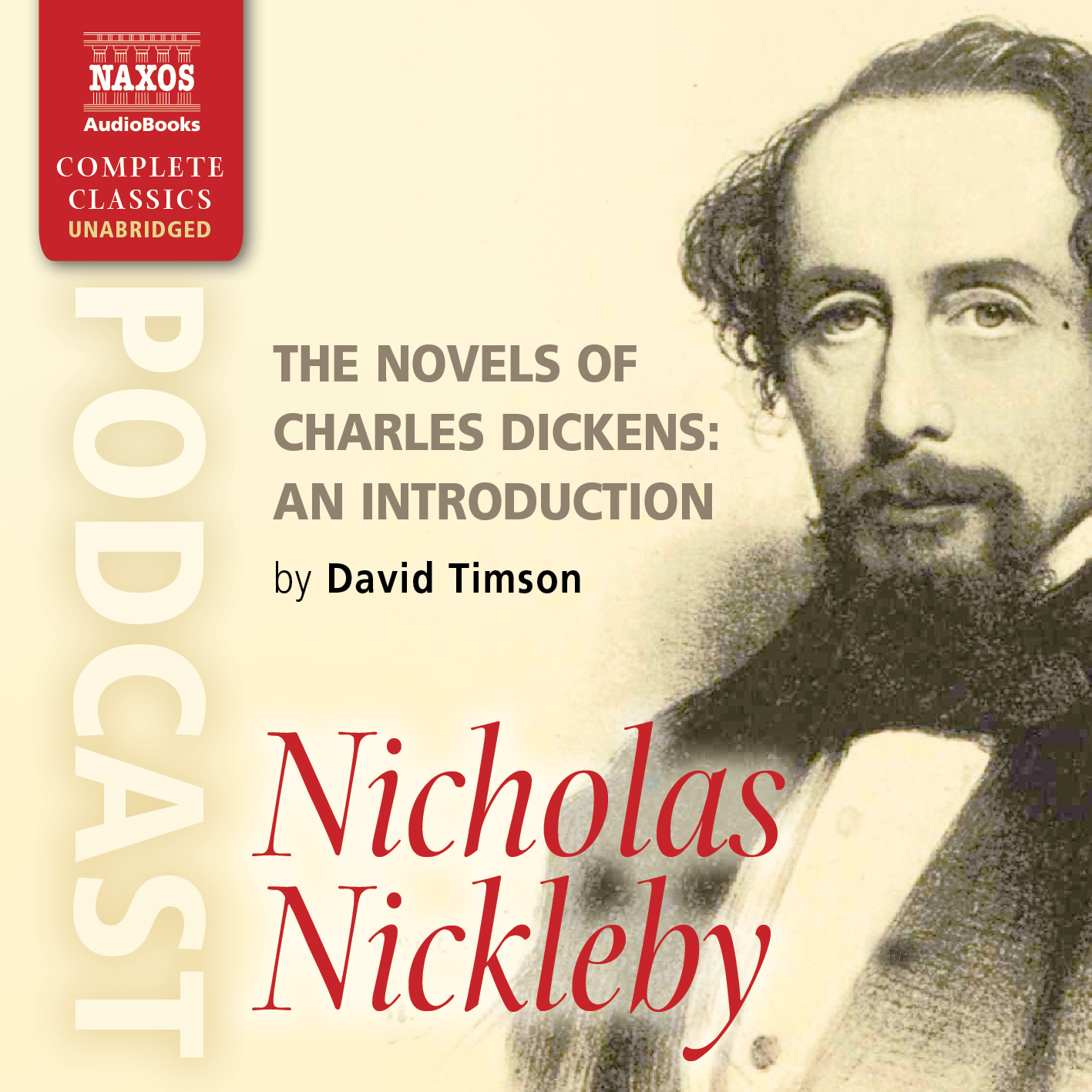 Nicholas Nickleby (The Novels of Charles Dickens: An Introduction by David Timson)

One of Dickens’ earlier novels, dating from 1839, it charts the fortunes of an honorable young man, Nicholas Nickleby, who has set out to make his way in the world. Dickens presents his remarkably vivid display of Victorian characters and the life they lead, from the generous to the fated to the crushed. Hope springs eternal, however, and righteous persistence brings rewards.

Naxos AudioBooks is putting out new readings to celebrate the classic writings of Charles Dickens. This is one volume in their series. And what a celebration it is! Nicholas Nickleby is Dickens in all his glory. There are characters that are positively Dickensian – the miserly lender Ralph Nickleby, the cruel schoolmaster Mr Squeers and his wretched family, the lecherous Sir Mulberry Hawke and his sidekick, Lord Verysoft, the absurd sweatshop owners Mr and Mrs Mantolini and their vicious foreman, Ms Knag. These are balanced by the many kindly and generous characters who innumerable times come to the rescue when all seems hopeless – Nicholas himself, his lovely sister Kate, the kindly Cheeryible brothers and their many loyal friends and allies. Dickens’s writing brings all of them to life against a vivid backdrop of 19th-century England. The plot has many twists and turns, and a satisfying conclusion. Distinguished British stage, film and television actor David Horovitch’s theatrical, fully voiced reading of this classic is no less than superb. He has vivid and believable voices for each of Dickens’s colourful characters and his voice is rich, his intonation clear and his timing impeccable. This long audiobook will provide hours of enjoyment for a wide audience.

This unabridged audio edition of Dickens’s classic novel of poverty, effort, and persistence puts the emphasis on unabridged, clocking in at nearly 40 hours – but dedicated listeners will be rewarded with an engaging and entertaining reading from narrator David Horovitch. In Victorian England, Nicholas Nickleby finds himself penniless after the death of his father. Assisted by his cold and parsimonious uncle, Ralph, Nicholas undergoes an array of trials and adventures – working as a teacher and actor – before finally succeeding in providing for his family. Horovitch wisely doesn’t attempt to update or revise the author’s familiar world. Instead, he reads with a careful tenor and subtly shaded array of voices that perfectly capture Dickens’s prose and characters. Harrumphing and stuttering and tittering, Horovitch turns in a winning performance that fans of the author are sure to enjoy.

Dickens started writing Nicholas Nickleby while he was still finishing Oliver Twist, a book he had begun while still finishing The Pickwick Papers. While this demonstrates his exceptional energy and invention, it also highlights the speed of his development. His first book – rather than novel – was Sketches by Boz, a collection of articles about people and places. The Pickwick Papers is an episodic single narrative, which gave Dickens greater scope to display his comedic and observational gifts. Oliver Twist is a dark fable raging against social injustice while following a hero who is essentially a symbol. In Nicholas Nickleby Dickens marries the emerging strengths of these formative works into something more coherent and greater than all the contributing elements. Here is a hero who, while hardly a complex character, is at least active in determining his own fate; here is a cause (the gruesome conditions at certain schools) that is not only to be attacked with satire but to serve as a means to move the story forward; here is opportunity for characters and situations of exuberant comedy. The writer and critic G.K. Chesterton suggested that it is Dickens’s first real novel. It is certainly the one in which the novelist seems to recognise fully the profound potential of his gifts.

Dickens took up writing as it appeared to be the only way he could avoid being a lawyer, or a subordinate in a lawyer’s office. His family had moved to London after a happy childhood around Portsmouth and then Chatham, where his father was a clerk in the Navy. But a combination of misfortune and improvidence left them in debt and his father in prison, meaning that the 12-year-old Charles had to live on his own, walk four miles to and from work through central London, and do hard, menial work in a blacking factory. The sense of abandonment that this provoked never fully left him. He had always been ambitious, imaginative, quick-witted and fond of performing, but these skills and aspirations seemed to dissolve as he felt abandoned. He had had some schooling, and once his father’s finances were more satisfactory he had some more, but his prospects were hardly bright when he was eventually given a post with a solicitor. However, he had a fierce determination, and, inspired by his father’s new job with a newspaper, he decided to become a journalist. He learnt shorthand in remarkably quick time, and began reporting on parliamentary matters, becoming well known for his speed and accuracy as a reporter. He was also following a yearning for the stage, performing in many amateur dramatics (as he would continue to do throughout his life), watching as many plays as he could, and beginning to write the vivid sketches and caricatures that would lead to the publication of Sketches by Boz in 1836.

Almost as soon as this was published, he was producing the first instalment of The Pickwick Papers, a book that was enormously successful extremely quickly; and within a few days of that initial instalment, he was married to Catherine Hogarth. He was also editing magazines. By the age of 25 he was a celebrity, a father and the foremost interpreter of an emerging middle class. The power of his position between Queen Victoria’s accession in 1837 and his death in 1870 has led to his being characterised as Victorian, but in many ways he was a part of an earlier world, and it might be truer to say that the Victorians he portrayed or caricatured behaved in a Dickensian fashion. His observation was astute, penetrating and imaginatively true; that is, while it may not always have been completely accurate in terms of the assumptions made about the individual, it was precise about how that facial tic, or vocal mannerism, or curious gait, would display aspects of a character in his fiction. This imaginative power became almost overwhelming: his sense of the truth of his stories overrode pure fact because that was how it appeared to him. So he created a recognisable world where fiction was the servant of a broader truth, and where he could appeal more directly to the readers’ own imagination. Wackford Squeers is a case in point.

Dickens went to a school in Yorkshire to see for himself the conditions that were rumoured to exist in these places; schools where bastards or otherwise unwanted children were sent, to all intents and purposes, to rot. Wackford Squeers is not a replica of William Shaw, the head teacher at the school he visited; he is a creature of Dickens’s imagination, but one who served to typify and personify a system that was, in its brutality and viciousness, even worse than the admittedly horrific one he presents in Nicholas Nickleby. In the book, the children are beaten, ignored and malnourished; in reality, they went blind, got frostbite and died. The portrayal of the school in the book, for all its fictions, perhaps because such fictions appeal more directly to a reader than tabulations and reports, led directly to most such establishments closing, and changes to the way people were educated throughout the country. Nicholas’s reaction in the book is that of any humane observer, and the comic grotesque of Squeers is intended to bring about that reaction in the reader, while always allowing the comic side of such excesses to be the weapon of satire, rather than reportage. This is largely true of many of Dickens’s villains. They are hideous but gargoyle-ish, believable but one-dimensionally so. What makes them so strong is the vividness of their depiction, the glorious linguistic delight in their description, the precision of their characteristics and the certainty that right will prevail. Similarly the comic characters – the outrageous Mr Mantalini, the wonderful Mrs Nickleby – are neither pure observations nor deep insights: they are inflated types. But they, too, are described with an infectious effervescence that makes them come alive as almost hyper-real, rather than perfectly fictional.

Dickens’s own life did not follow such a happy path as those of his fictional heroes. His wife bore 10 children, but her self-effacing nature and the terrible struggles against post-natal depression wore her down in the face of her husband’s seemingly endless reserves of energy and activity. They eventually separated in 1858, and Dickens continued a complex relationship with a much younger actress called Ellen Ternan. By the time of his death, he had written almost ceaselessly – novels, stories, travel literature, sketches, articles; he had travelled widely and often; and he had performed enormously popular readings of his works in Britain and America. His invention continued to develop into many darker areas of his recollection and imagination as he grew older and wearier, but he never lost his popularity nor his capacity for brilliantly telling characterisation. He created works that will still be read in another 200 years, with the same truths resonating in their fiction.