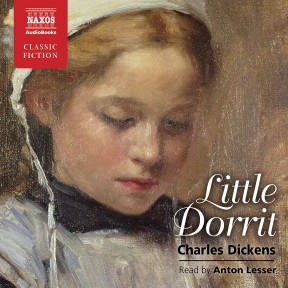 In Little Dorrit, Charles Dickens created one of his most penetrating satires on the weaknesses of government in the Victorian era. He chose Marshalsea debtors’ prison as the setting, where his own father had been imprisoned. The story revolves around a complex mystery involving conspiracy, debt and a disputed will that results in unexpected consequences for the main characters. 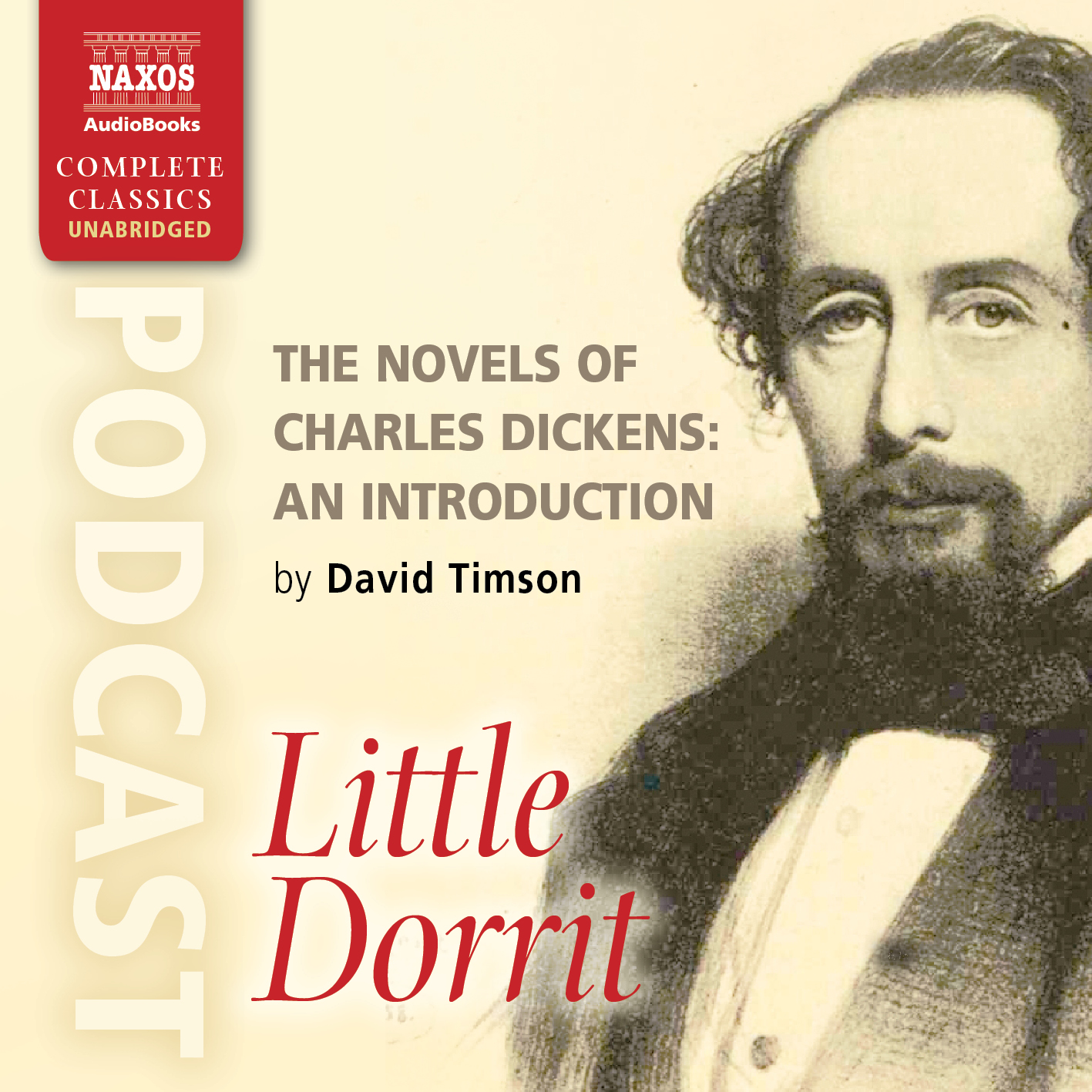 Little Dorrit (The Novels of Charles Dickens: An Introduction by David Timson)

William Dorrit has been a resident of the Marshalsea debtors prison for so many years that he has gained the nickname ‘The Father of the Marshalsea’. However, his suffering is eased by his close bond with youngest daughter Amy, or ‘Little Dorrit’.

The dashing Arthur Clennam, returning to London after many years in China, enters their lives, and the Dorrits’ fortunes begin to rise and fall.

A biting satirical work on the shortcomings of 19th-century government and society.

Holding court in the debtors’ prison of the Marshalsea symbolises the vanity and arrogance of society, just one of Dickens’s many targets in this classic novel. He lashes the prison system, and his characters are grotesque and horribly flawed: bed-ridden Mrs Clennam rails against the world she has wronged; Flora Finching spews out non-stop romantic gush as she pursues her love of twenty years before. Only in ‘blessed’ Little Dorrit herself, one of Dickens’s unfeasibly good women, is there any hope for the future. Sprawling, and lacking a strong central character, Little Dorrit isn’t one of Dickens’s best, but with Anton Lesser’s magical voice, who cares?

Dickens was full of ideas for this, his eleventh novel, as he started work on it, and was convinced that he had a ‘capital name’ for it – Nobody’s Fault.

However, try as he might, he couldn’t settle to the writing of it: there were too many distractions. For instance, Dickens always loved amateur theatricals, and he was keen to produce and act in a new melodrama by his young friend Wilkie Collins called The Lighthouse, which was to be performed in the school- room at Tavistock House (Dickens’s home) by his family and friends. Dickens characteristically threw himself into every aspect of the production: scenery, special effects, lighting and, of course, his own full-blooded acting, which often reduced the audience to tears. Meanwhile the manuscript of his new novel lay untouched.

He took up the threads again in Folkestone, where he went for the summer of 1855, seeking peace and quiet to concentrate on the book. The novel was taking a long time to take shape and Dickens was afraid he might be losing his imaginative powers. He was having difficulty finding a theme that would draw the book together.

Though he set the book in the 1820s, it was the issues of the 1850s he wished to address. The book’s origins are to be found in his disgust at the appalling administration of the Crimean War (1854–56). He made speeches against the Prime Minister Palmerston and his administration. Hundreds of British soldiers had died, not through the conflict of war, but through neglect and lack of essential supplies from the British Government. The original title Nobody’s Fault had become the official response to the disaster, and this was Dickens’s way of exposing the crippling bureaucracy and red tape that hampered the Civil Service and prevented Britain from becoming an efficient modern nation. The Fictional Circumlocution Office was born:

It is true that How not to do it was the great study and object of all public departments and professional politicians all round the Circumlocution Office. It is true that every new premier and every new government, coming in because they had upheld a certain thing as necessary to be done, were no sooner come in than they applied their utmost faculties to discovering How not to do it.

The background theme of the novel is the atrophying of the British nation as the result of outmoded political institutions, and the apathy that breeds in a society which never moves forward. Over the whole book Dickens casts a dirty and dingy pall; the odour of decay pervades every character. Against this gloomy background, Dickens developed his narrative: the story of a middle-aged man (Arthur Clennam) who finds inspiration and escape from his own personal apathy in the simple but devoted spirit of a young woman willing to serve and help others at the expense of herself. Dickens works hard to show that an inert society can be re-vitalised by the example of individuals: Doyce working single-handedly for the betterment of British industry and the conditions of the working-man; Mr Meagles’s kindness and generosity of spirit; Pancks rebelling finally against the rent-racketeer Casby; and Little Dorrit herself, of course. So important did this young woman – born in the Marshalsea itself – become, that Dickens changed the title of the book to Little Dorrit, though ‘Nobody’s Fault’ is heard as the recurring cry throughout the book.

Dickens’s restless energy, which he had displayed in Collins’s amateur theatricals, continued throughout his creation of the novel. For instance, the latter part was completed during a prolonged stay in Paris. ‘One is driven by an irresistible might until the journey is worked out! It is much better to go on and fret than stop and fret,’ he wrote manically to his friend Forster at this time. It shows how closely he associated himself with the theme of his novel: action rather than atrophy. To be continually on the move avoids the inevitable – becoming a prisoner of one’s own personality and past – and Dickens was a man haunted by his past.

As with his other novels, Dickens could not help drawing on his own eventful life when creating the characters and narrative of Little Dorrit.The sombre shadow of the Marshalsea Prison looms over the whole book, and is a testament to the deep effect the place had on Dickens as a child, when his own father John Dickens was imprisoned there for debt. Mr Dorrit, the Father of the Marshalsea, is based on Dickens’s insolvent father. He had presented an affectionate and humorous portrait of him before, in the character of Mr Micawber in David Copperfield, but in Mr. Dorrit, Dickens shows his father’s darker side:

Crushed at first by his imprisonment, he had soon found a dull relief in it. He was under lock and key; but the lock and key that kept him in, kept numbers of his troubles out. If he had been a man with strength of purpose to face those troubles and fight them, he might have broken the net that held him, or broken his heart; but, being what he was, he languidly slipped into this smooth descent, and never more took one step upward.

Through his father’s fecklessness young Dickens became very familiar with the Marshalsea and it is in the detailed descriptions of the prison’s interior that he reveals to us the misery indelibly stamped on his youthful consciousness. ‘The walls and ceiling were blackened with flies,’ he remembers, and later recalls a child’s fancy gazing on the harsh prison walls: ‘Many combinations did those spikes upon the wall assume, many light shapes did the strong iron weave itself into, many golden touches fell upon the rust, while Little Dorrit sat there musing. New zigzags sprung into the cruel pattern sometimes, when she saw it through a burst of tears…’.

Flora Finching, the first love of Arthur Clennam, is a fictional portrait of Dickens’s own first love Maria Beadnell, whom he met twenty years after their youthful romance, and who had, like Arthur’s sweetheart, ‘blossomed’ in the intervening years: ‘Flora, always tall, had grown to be very broad too, and short of breath; but that was not much. Flora whom he had left a lily, had become a peony; but that was not much. Flora who had seemed enchanting in all she said and thought, was diffuse and silly. That was much. Flora, who had been spoiled and artless long ago, was determined to be spoiled and artless now. That was a fatal blow.’

In Flora Finching, Dickens creates one of his most humorous characters, despite being bitterly disillusioned by the changes he saw in Maria, Flora’s original. For like Flora, she was a prisoner to her youthful self.

In a sense, every character in this book is a prisoner of him or her self. There is a long chain of prisoners who in their turn imprison those nearest to them. Dorrit suppresses the freedom of Little Dorrit by relying on her for everything; even the great Mr Merdle is a prisoner of the very society he has helped, as a great financier, to perpetuate. He escapes through suicide, when it is revealed that he ‘was simply the greatest forger and the greatest thief that ever cheated the gallows’. Merdle’s fall brings about Arthur Clennam’s, who had invested with him. Arthur, the self-deprecating hero of the novel, is another man trapped within himself. He is dominated by Mrs Clennam. His youth was destroyed by her perverted religion and his young manhood wasted working in the stultifying family business abroad. He returns to England an empty submissive shell; all spontaneity gone. He has not the spirit to propose to Pet, the beautiful daughter of Mr Meagles, and is unaware of the love of Little Dorrit until the end of the book.

The inhabitants of Bleeding-Heart Yard are in their turn imprisoned by poverty, cripplingly low wages and extortionate rents. They cannot escape the treadmill of mindless drudgery, or soul-destroying unemployment. Whose fault is it? Nobody’s, is the general conclusion once again. Rents charged on people with no means to pay is one of the curses of capitalism, and Dickens’s exposure of this oppressive system in the 1850s, though stopping short of demanding the reform of society itself, laid a foundation on which Karl Marx could draw for his socialist writings of the 1860s. Instead, Dickens, as a creative writer, chose to side-step politics and be true to humanity. He sends Arthur and Little Dorrit out into the world to endure its realities, and not to change it. They will live a good and uneventful existence where whatever happens will be, in their eyes, ultimately – nobody’s fault.