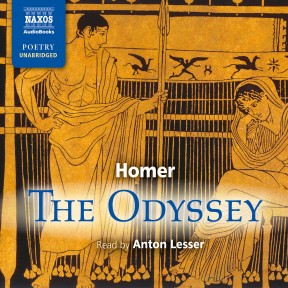 The Trojan War is over and Odysseus, the cunning King of Ithaca, sets out for home, his wife Penelope and his son Telemachus. It proves a long, 10-year journey, fraught with dangers, from Polyphemus, the one-eyed Cyclops, and the seductive Sirens, to the love of Calypso on her all-too-comfortable isle. When he arrives in Ithaca, he has to contend with a group of suitors who have been pressing his wife to forget about her husband, admit she is a widow, and marry one of them. Anton Lesser, one of Britain’s finest audiobook stars, brings this great classic to life in the new and imaginative translation by Ian Johnston.

There are scholars who argue that, given the glaring contrast in style, structure and characterisation between the Iliad and the Odyssey, Homer could not possibly have written both.

Assuming you already have the Iliad produced by Naxos last year, here is your chance to decide for yourself. Personally, I prefer the Odyssey and, since Anton Lesser reads both, my preference has nothing to do with the voice. To be honest, I preferred Derek Jacobi’s more macho recording of the Iliad, no longer available, which was more suited to the relentless descriptions of blood-fests.

Homer’s scene changes are almost cinematic, a plus if you’re trying to get teenagers to engage with it. One minute you’re in Ithaca where the hero’s faithful wife Penelope is fending off a house full of unwanted suitors, then you’re on Olympus eavesdropping on the gods arguing, as usual, about which mortals to support and which to put the boot into, and then it’s over to the idyllic island where the beautiful nymph Calypso holds Odysseus prisoner.

The Odyssey, with its litany of challenges, betrayals and, of course, heroism, is the perfect vehicle for Lesser, whose musical voice does passion and romance brilliantly.