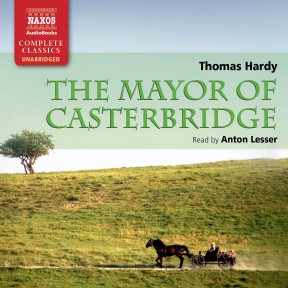 The Mayor of Casterbridge

Michael Henchard, drunk at a country fair, sells his wife and baby daughter for five guineas. The following day, in despair and remorse, he forswears alcohol and sets out to redeem himself. In time, he becomes a respected merchant and eventually the mayor of the town. But Fate is not to be so easily appeased, and Henchard finds his past actions resonate through and destroy his plans for the future. One of the greatest novels in the English language, The Mayor of Casterbridge sees Thomas Hardy at his best, bringing landscape and richly imagined characters to life, and setting the hope of love against the forces of Providence.

What has Providence done to Mr Hardy that he should rise up in the arable land of Wessex and shake his fist at his Creator?

So wrote Hardy’s friend Edmund Gosse at the end of a review of Jude the Obscure. It’s a fair question. What made Hardy see the world as such a dark and unforgiving place? He grew up in a loving family, studied and worked at a job he enjoyed, lived in a part of the country he loved, went on to make his living as a writer, and became (and remains) one of the greatest English novelists. His life had its tragedies – the suicide of a close friend, a childless and ultimately unhappy marriage – as well as its philosophical darknesses (he found the conventional notion of a benevolent God impossible). But surely these are not sufficient to explain an almost malevolently disinterested Fate that wreaks its heedless damage upon the central characters of his books. For Hardy, coincidences are not merely plot devices: they are the wheels of a Juggernaut that will crush everything that has any association with it; and to which the characters seem tied by virtue of their flawed human-ness.

Hardy was compulsively interested in how people’s characteristics shaped their lives; in local history; and in recognising the social shifts that were changing the landscape, workscape, philosophy and very tenor of the world he knew. As a writer, he bridged the span between the high Victorian of the 1860s and the era of Modernism in the 1920s. Around him, the rigorous certainties of the former gave way to the intellectual and spiritual doubts of the latter, and the shift was registered everywhere, from the literary cliques of London to the labourers in Dorset – everything was undergoing a profound upheaval. And Hardy was caught between the two extremes.

It explores many
of his core themes,
all laced within
a story that has
its starting point
in fact

He was born to a builder and master stonemason in Bockhampton, Dorset, and although educated at home until he was eight, he was a capable student and by the time he was 13 was learning French and Latin. He was also a lover of music, something he shared with his father, playing the violin and joining the choir. But his family’s social status and lack of funds meant any further education was out of the question, so at 16 he went to study under the architect John Hicks, and at about the same time, met Horatio (Horace) Moule. For the next 15 years or so, Moule was to be a friend and mentor, introducing Hardy to the contemporary authors and the Greek writers, whose sense of the tragic was to be echoed in much of Hardy’s work. Moule was a man of profound charm, charisma, intellect and personality, blighted with melancholia and a tendency to alcohol. He eventually committed suicide in 1873. There is no evidence to suggest a sexual element to their closeness, but Moule’s life (and death) had the same depth of effect on Thomas Hardy as Arthur Hallam’s had on Tennyson – something at the very root of life was expressed by the friendship; something crushingly destroyed by the death.

Before that tragedy, however, Hardy was making a living as an architect, and in 1862 he took a post in a practice in London. Here his pained sensitivity to the niceties of the English class system and his belief that reform in all areas of English social life (philosophical, religious and political) was necessary were honed by his exposure to wider culture and to other writers and philosophers. But his health was never strong; and the urge to live in the countryside he loved so much meant he returned to Dorset five years later. He had been writing poetry for some time, but it was felt that the publishers wanted prose. So he started writing novels, though at first the publishers didn’t want them, either. He destroyed his first one, but was persuaded to carry on, and between 1872 (Under the Greenwood Tree) and 1898 (The Well-Beloved) he wrote 18 novels, including six or seven of the greatest works in English fiction. These are tragedies that bring together strong characters and an implacable Fate (often one that seems to pass judgement on the basis of conventional morality) in an area of south-west England that Hardy knew, loved, understood – and mythologised as Wessex. One of these was The Mayor of Casterbridge.

It explores many of his core themes: the traps of convention; the ramifications of character; class and social structure; the conflicts between love and loyalty, self and the greater good; fate; religion; and many other issues, all laced within a story that – for all its apparent improbability – has its starting point in fact. Hardy collected items that matched his view of the way life treated people, and incorporated them in his works; and he noticed a story in a local paper about a man selling his wife at a fair. It seemed a perfect springboard for the characters he had in mind. Henchard is not just a victim of circumstance – his fate is rooted in his inherent characteristics and the decisions he makes are based on his nature. The same is true of Farfrae, Elizabeth-Jane (although she was somewhat softened in later editions, which rather reduced her strength of character) and even Susan and Newson. This is why the novel has the subtitle A Story of a Man of Character (although which man is meant by this is not completely clear). The lives that are played out are not merely at the whim of fate, God or even, to some extent, the novelist. They are the natural extensions of the characters themselves.

The novel was serialised in the Graphic with some trepidation, since Hardy was developing a reputation for controversy that would only grow over the remaining 10 years of his life as a novelist. His opposition to many of the standard mores put him at odds with the establishment, and the reception afforded his later works – one Bishop actually burned a copy of Jude the Obscure and, as Hardy pointed out, that was probably only because he couldn’t burn the novelist – decided him to give up the form altogether and return to his first love, poetry.

Between 1898 and the end of his life, Hardy published no more novels, but concentrated on poems and epic verse. He was awarded the Order of Merit in 1910, having earlier refused a knighthood, and a major edition of his works was published in 1912. But the same year, his wife – from whom he had been essentially estranged for almost two decades – died; and her death proved a wellspring of profound emotion and inspiration as he remembered their earlier happiness. He married his secretary Florence Dugdale two years later, and continued to publish verse and autobiography until his death in 1928.

So what had Providence done to Mr Hardy? Nothing of itself, perhaps. It was his fate to be gifted with a sense of the effects of character on life, of the capacity for unhappiness, of the shifts undermining the social world; his fate to have a poetic imagination, a deep understanding of irony and a mind that could not accept a conventional theology. And it was his fate to act upon these inherent gifts and flaws, just as his heroes and heroines did.