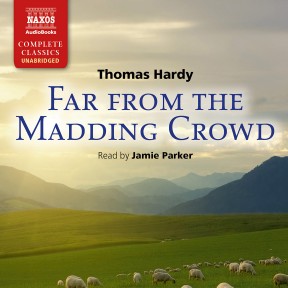 Far From the Madding Crowd

In a remote corner of early Victorian England, where traditional practices remain untouched by time, Bathsheba Everdene stands out as a beacon of feminine independence and self-reliance. However, when confronted with three suitors, among them the dashing Sergeant Troy, she shows a reckless capriciousness which threatens the stability of the whole community. Published in 1874, and an immediate best-seller, Far From the Madding Crowd established Thomas Hardy as one of Britain’s foremost novelists.

A dark-haired muse, Bathsheba Everdene, entices and repulses the men of Hardy’s rural Weatherbury. When she’s finally won in marriage, she’s consumed by despair. British actor Jamie Parker’s sonorous voice complements Hardy’s deliberate style. While Parker assumes an unhurried tone throughout the narrative, he provides energetic feeling in the dialogue. His vocal characterisations are well executed, particularly in the discussions of the townspeople in which he portrays the local dialects convincingly. He also effectively contrasts the methodical Gabriel Oak and the haughty Bathsheba in their heated discussions. Parker skilfully navigates the listener through the novel, and his attention to the nuances of Hardy’s prose makes his narration especially compelling.

Thomas Hardy was born near Dorchester on June 2nd 1840. It was in 1862, when he moved to London to pursue a career in architecture, that he began to write, but he did not begin his first novel until he moved back to Dorset in 1867 to become assistant to John Hicks, an architect and church restorer. Only fragments survive of this first novel, The Poor Man and the Lady, but he continued to write and in 1871 Desperate Remedies was published, followed by Under the Greenwood Tree (1872) and A Pair of Blue Eyes (1873). In 1874 Hardy married his first wife, Emma Gifford, and in the same year Far From the Madding Crowd was published to considerable acclaim. Four years later he moved back to London; The Return of the Native was published in the same year and he became a prominent figure in literary circles. Returning again to Dorset in 1885, Hardy continued his regular output: The Mayor of Casterbridge (1886), The Woodlanders (1887) and a collection of short stories, Wessex Tales (1888). Tess of the d’Urbervilles was published in 1891 and his last novel, Jude the Obscure appeared in 1895. Towards the end of his life Hardy turned to the writing of poetry. Emma died in 1912 and in 1914 he married his secretary, Florence Dugdale, with whose help he began his autobiography, The Early Life of Thomas Hardy. This was published posthumously, as he died on January 11th, 1928. His ashes were laid in Poet’s Corner in Westminster Abbey and his heart was buried in the grave of his first wife at Stinsford, next to the tomb of his parents.

Hardy believed the purpose of writing fiction lay in giving pleasure to the reader by expressing rare events whilst ‘disguising’ their ‘unlikelihood’ within a strongly naturalistic style. Such a view was partly conditioned by the demands of the monthly magazines in which Victorian novels often made their first appearances. The idea of narrative subterfuge was vital as writers were forced to try to communicate plots and ideas forbidden by the rules of these delicate publications. It is partly for this reason that Hardy’s work is so remarkably multilayered. Comedy hides tragedy, love and violence.

Characters also represent an elaborate weaving of styles. Gabriel, who represents the archetype of The Faithful Shepherd, blends in with the landscape; Troy appears as an outsider whose red coat stands out in contrast against the greenery of the village. Gabriel is a bringer of life, saving the lives of the bloated sheep; Troy is a destroyer, using his sword primarily to impress and seduce Bathsheba. She, of course, is the most fluid character of them all. She is a shimmering creation that, by turns, represents sex, property, authority, vulnerability. Our perception of her constantly shifts as we see her through the eyes of her three different suitors, until we become a suitor ourselves, fascinated and compelled by this most complex of literary creations.

Thus Hardy transcended the demands of literary subterfuge to create a world in Far From the Madding Crowd that by its pluralist nature comes close to matching our own. Like Shakespeare, Hardy understood that the world is best expressed as something rich, varying and surprising, and that the best kind of art disguises as it reveals.