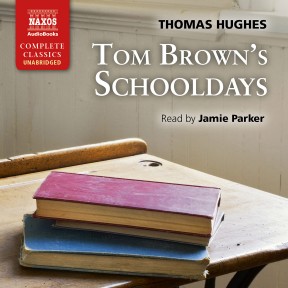 Tom Brown’s Schooldays is the story of an energetic, good-hearted boy and his adventures at public school. Based on the author’s own childhood, the novel presents us with a snapshot of life at a Victorian public school as we follow Tom’s development from a boy to a young man. Tom must fend off his arch- enemy, the bully Flashman, and take a younger boy under his wing – experiences through which he learns loyalty, courage and brotherhood.

Narrator Jamie Parker enters fully into the spirit of this very British story of a schoolboy at Rugby in the 1830s. Parker conveys clearly, richly, and seemingly without effort the narrator’s excitement at games, manly advice to his presumed audience of boys, winking at boyish misbehaviour, quiet seriousness at moments of sadness or piety, and occasional waggishness, as when he defends his own manner of writing. Parker’s pacing, ability to convey feeling though tone, and accurate weighing of word and phrase are all professionally deft. He manages to entertain without calling attention to himself, essentially becoming the book to the listener. It’s an engaging performance of a minor British classic.