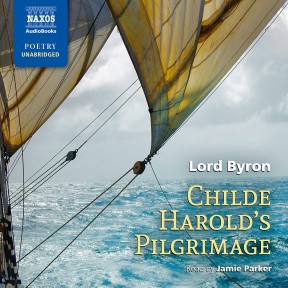 Childe Harold’s Pilgrimage is a fascinating portrait of 19th-century Europe, disillusioned and ravaged by the revolutionary and Napoleonic wars. The protagonist, whose breathtaking journey echoes Byron’s own life story, plunges into the exciting unknown: the nature of humanity and the transformative effects of travel burst through the pages in four powerful cantos of Spenserian stanzas. Here is the poem that set Byron on his meteoric rise to fame in London society.

Narrator Jamie Parker wisely avoids poetic affectation or awkward emphasis on rhyme or rhythm in reading Byron’s long poem on his European travels, which introduced the world-weary ‘Byronic hero’. Parker emphasises sense, letting it direct his reading, but the rhyme and rhythm come through as a kind of lyrical, mellifluous prose, bathing the listener in a lush flow of words. His reading is admirably clear, expressive, and emotional. Listeners who try reading the poem themselves may find that Parker’s narration is actually easier to understand. Nonetheless, the density of allusions – references to earlier history and literature as well as to Byron’s own time – will make this a challenge for most listeners. It’s still worthwhile, and in Parker’s rendition an absorbing and beautiful piece.

“I woke up one morning and found myself famous,” Byron recalled after the publication in 1812 of the first two cantos of his versified travelogue, Childe Harold’s Pilgrimage, fruit of a two-year grand tour. Until then he had been despised as a dissolute show-off; suddenly he was the toast of literary society. Byron’s remarkable portrait of Spain, Albania and Greece as they were during the Napoleonic wars is laced with tips on seduction (“Maidens, like moths, are ever caught by glare”), political satire and rapture about literature, landscape, architecture and dashing national attire. The poem was completed in 1818, extended with reflections on Waterloo and a melancholic elegy on Italy’s decline. Written to be listened to in Regency drawing rooms to the flutter of fans and cocked lorgnettes, there is no better way of experiencing it than Jamie Parker’s beautifully judged performance.