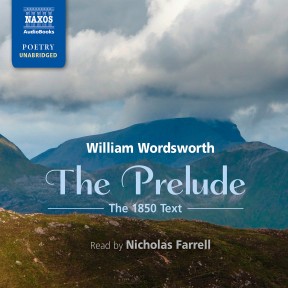 Wordsworth’s Prelude is the consummation of his achievement as the great founder of English romanticism. An autobiography in verse, it tells of his childhood in the Lake District, his student days in Cambridge, his passion for the French Revolution and his later disenchantment with it, and his personal journey to a belief in Nature as the great moral and spiritual force which shapes human life, but on which human society all too often turned its back. Subtitled ‘Growth of a Poet’s Mind’, The Prelude is both a key document in the history of English literature, and an inspiring work of imagination, as fresh and challenging today as when it was written two centuries ago.

I am a little ashamed to admit that I began by using William Wordsworth’s The Prelude as my bedtime story, confident that I would be lulled off pretty fast. But it proved altogether too fascinating. Promoted to my striding-the-hills-and-dales book, it is hugely enjoyable, telling not just of Wordsworth’s love of the lakes but of his life in London and in France during the Revolution, and full of course of famous lines (‘Bliss it was in that dawn to be alive / But to be young was very heaven; Rise up, thou monstrous ant-hill on the plain / Of a too busy world!’)

Wordsworth’s poem is one of the fundamental documents of the Romantic period. Written and revised over a period of more than 50 years, it expresses Wordsworth’s moral and aesthetic autobiography in blank verse. It isn’t easy to maintain the listener’s interest in such an abstract subject, but Nicholas Farrell finds the passion and intensity that must have struck readers when this was a new and revolutionary story. At the same time, Farrell’s narration is intimate, not pompous or bombastic. He articulates Wordsworth’s ideas without forgetting this is verse but without over-stressing the metrical regularity and variations. This is an essential listen for anyone interested in the roots of Romanticism.

In the rich landscape of English literature, few writers have a presence as powerful or as distinct as William Wordsworth. He towers over the great break with the rigid neo-classicism which had long dominated English poetry, and opens instead the age of Romanticism. Imagination, freedom, beauty, mystery, passion and innocence: these were the new forces which Wordsworth discovered from a new source, from nature, which became to him nothing less than a divine power to guide man’s moral, intellectual and emotional life. He was the key figure who opened the way for the other giants of English Romantic poetry − Coleridge, Byron, Shelley and Keats.

Wordsworth is renowned for a dozen magnificent, entirely original poems that were revolutionary in their presentation of nature and the inner life of man: Intimations of Immortality, Daffodils, Tintern Abbey, The Solitary Reaper, Westminster Bridge and so on. But the most complete and personal embodiment of his beliefs and his novel poetic creed is to be found in the long autobiographical poem upon which he worked for half a century, but which he never made public. Begun in 1799 and completed in its initial form by 1805, it was revised and revised again before its final publication only after the author’s death in the year 1850, edited by his beloved sister, Dorothy, who suggested the title, The Prelude, or Growth of a Poet’s Mind. It was apparently to have formed the introduction to an even longer meditative poem which was never written. Wordsworth’s exact reasons for withholding The Prelude from publication have never been discovered: the poem is personally revealing, but not in any way that could conceivably be painful or damaging to him.

It is a
work of
astonishing
freshness
and interest

Whatever the answer may be, The Prelude is unlike any poem ever written in English before: it is a work of tremendous courage, integrity and sensitivity. In addition to the factual outline of his life, the poet reflects at length on his experiences, his emotional development and his gradual awakening to the overwhelming importance of nature. It is a record of his inner life, and of the vocation of poetry. The best-known passages are probably those in the first two books, telling the story of his Lakeland childhood: bathing in streams, snaring birds, skating on the frozen lakes, boating by moonlight, or merely watching the mountains, listening to the wind, and learning through all these experiences to recognise the ‘Wisdom and spirit of the universe’, which he believed animated these scenes. It was by not forgetting these experiences, as most people do, and by developing from them ‘a sense of possible sublimity’, that he grew to become a poet. The Prelude is full of Wordsworth’s sense of being different, of being chosen to see into the heart of these experiences and realise their true meaning.

From the Lake District of his boyhood he proceeded to Cambridge, of whose learning and traditions he says, ‘I was the dreamer, they the dream.’ But Wordsworth was no scholar and left without a degree, hurrying instead to the beauty of the Alps and to the excitement of revolutionary France. Here, he first fell deeply in love, and then into equally deep disillusionment with the tyranny that followed France’s great historic leap towards freedom. He retreated back to London, entering into his crucial friendship with Coleridge, who convinced him of his poetic vocation; Wordsworth amply repaid his friend by addressing The Prelude to him. It was in London’s desolate streets, of which he wrote ‘the face of everyone that passes by me is a mystery’, that the full significance of the natural grandeur of the Lakes revealed itself to him. Building on his childhood sense of sublimity and innocence, both of which are destroyed by the adult world, he worked out his revolutionary aesthetic creed: that the beauty of nature has a moral power over man, elevating his intellect, his feelings, and his entire life. He links the great mystery of nature, and his passionate feeling for it, with another mystery − that of language. Emotions, ideas and experiences only take shape and become complete when they are mirrored in language; therefore the ‘growth of the poet’s mind’ occurs through a twofold enchantment: the enchantment of nature and the enchantment of language. The poet must embody new experiences and new perceptions in a new language.

And this is what Wordsworth so magnificently achieved in The Prelude. It is a work of astonishing freshness and interest, a self-searching diary sustained through almost ten thousand lines of verse, in a language that is somehow both public and private. It is thoughtful, serious and dignified, yet restless, sensitive and almost spiritual, conveying the sense of a deep personal search for the meaning of our human identity, thrown as we are into a world of pain and suffering, mystery and beauty. It is written in blank verse, the verse of Shakespeare and Milton, but a blank verse that is made intimate, personal and lyrical, the unmistakable voice of man exploring and making sense of his own life and his own feelings. In form and length, it is an epic, but an epic not of historical adventure, suffering and achievement, but of the life of the mind, the unfolding of spiritual understanding, the discovery of a personal faith.

As an autobiographical document, The Prelude holds a unique place in English literature, for never before had a man placed his inmost life on the page in this way. Wordsworth re-wrote the poetic agenda for all who followed him: the individual mind and heart became the life-blood of poetry, whether it was confronting the grandeur of nature or the tragedies of human society. Longer, more complex, and at first sight more forbidding, than the celebrated Wordsworth poems which appear in every anthology, it is nevertheless The Prelude that contains the fullness of his imaginative achievement. Its message, the discovery of personal being, is − if we will listen to it − undiminished in its urgency.