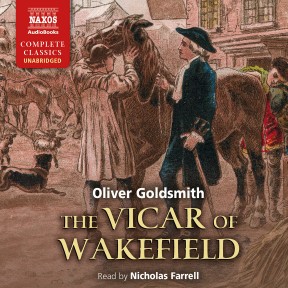 The Vicar of Wakefield

First published in 1766 and a perennial favourite since then, The Vicar of Wakefield is built around the naïve but loveable figure of Dr Primrose. He and his family live in rural bliss until disaster threatens to destroy their happiness: abduction, impoverishment and betrayal combine to lay them low, but a surprising figure brings hope when all seems lost.

We think of eighteenth-century England as an age of elegance, an age of reason and of rational religion, an age of moral reflection, an age of privileged aristocrats in their fine country houses, an age reflected back to us in its neo-classical architecture and the paintings of Gainsborough, Reynolds, Zoffany and Stubbs. But of course it was also an age of squalor, poverty and blatant injustice, an age of teeming cities, brutality and public hangings, an age of disease when infant mortality was astronomical and the poor had to live on the crumbs from the rich man’s table, and an age ruled by political bribery and corruption. This was the England of Hogarth, whose bitter satires showed the underside of the nation’s life.

Astonishingly, we can find all these competing Englands – bright and dark, elegant and vile – portrayed in one brief novel published in 1776 by that erratic genius, Oliver Goldsmith. The Vicar of Wakefield is a charming, baffling, unclassifiable novel of manners and morals, which quickly became a classic that has not been out of print since the day of its publication. Not the least among its claims to fame is the celebrated story of its publication. The great Doctor Johnson, a close friend of Goldsmith, received an urgent message one day, asking him to come at once to Goldsmith’s lodging. On arrival, Johnson found that Goldsmith was penniless and was about to be thrown out of his lodgings. Johnson asked Goldsmith if he had any possessions that might be turned into ready money, and Goldsmith showed him the manuscript of The Vicar of Wakefield. Leaving Goldsmith to console himself with a bottle, Johnson hurried off to a nearby bookseller and sold the novel for £60, thus solving Goldsmith’s crisis – for the present.

The novel’s fame is demonstrated by the fact that even those who have never read it know what it is about. It is a moral tale concerning a benign and saintly clergyman, Doctor Charles Primrose, whose tranquil life is shattered by a series of cruel reversals, blows of fate, which deprive him of his fortune, his position, his family and his liberty. Throughout this ordeal, he maintains his dignity, his philosophical demeanour and his faith in God. Finally, having reached the depths of destitution, the wheel of fortune turns, and he is restored to liberty and happiness. This is a Book of Job transferred to eighteenth-century bourgeois England, in what is one of the first purely domestic novels in our literature.

Goldsmith has evidently taken elements from other eighteenth-century novelists: the picaresque adventures of the road and the inn from Fielding and Smollett; the seduction of innocent girlhood from Richardson’s moral sagas; the sentimental reflections from Sterne; and the idea of the philosophical novel from Johnson’s Rasselas. All these elements are packed into a tale of less than 200 pages, whose sudden changes of pace and tone suggest Goldsmith’s haste and stress as he wrote it, as if he were pouring it out as fast as he could, with little care for structure or realism. The main story-line is interrupted more than once by long, personal flash-back narratives, notably that of Doctor Primrose’s eldest son, George. He tells of his adventures while travelling in Europe, chasing a variety of ways to earn his living, among them hack writer, Greek scholar, art dealer, and actor, all attempted and abandoned in the dramatic swings of fortune.

This headlong quality in the narrative suggests another parallel that is somewhat surprising, namely Voltaire’s great satire, Candide. Whether Goldsmith had read Candide we do not know, but it is likely, for he certainly knew Voltaire’s works in general and wrote a biography of him. Travel, adventure, seduction, sudden flashes of good fortune and equally sudden disasters, characters who disappear and return later, even when they are supposed to be dead – all these things turn up in both novels. And both novels are fundamentally theodicies: they explore the question of divine providence, and why God permits evil to triumph in the world, although in neither book is an answer produced. Candide examines this question in the violent, surreal world created by Voltaire’s imagination, in outlandish settings such as the Lisbon earthquake, the jungles of South America, and the slave markets of Turkey. Goldsmith works out his vision in the more down-to-earth setting of Georgian England.

The echoes of Candide take us further however, because the great critical question in understanding The Vicar of Wakefield is simply this: is it serious or satirical? Are we supposed to read it as a straightforward moral tale of fortitude in adversity, or is Goldsmith mocking the complex, random social forces that lay not far beneath the surface of elegant eighteenth-century life? Are we supposed to believe in the successive blows of fate that strike the good vicar, and in his angelic patience? It seems that generations of readers from the 1770s onwards did indeed take the story at face value, and they loved its portrayal of this sincere, dignified, philosophical Englishman, his knockabout adventures and his final vindication. But the more cynical modern reader will scarcely get past the first two or three chapters without the feeling that his leg is being pulled. Surely, he will say, we are reading a satirical tragicomedy in prose, paralleling Hogarth’s visual satire of the grand, pretentious, bizarre, squalid, hypocritical, anarchic society in which they both lived. Yet no one can demonstrate beyond all doubt which view of the novel is the true one – it is all a matter of personal perception and response. It is a critical puzzle that has resisted all solutions, and it is somehow appropriate to Goldsmith’s odd, enigmatic and unstable character.

Goldsmith was a troubled and troublesome youth whose life proceeded in a series of periodic upheavals and crises. Irish by birth, he first studied for the Church in Dublin, then for the profession of medicine at Edinburgh and Leyden. He spent some years in European travel, then for some time he seems to have practised as a doctor and also as a schoolteacher in London. He turned to journalism and hack writing in London’s Grub Street, and kept poverty at bay by producing a great stream of works on a variety of subjects. His long philosophical poem The Traveller attracted attention and praise, and gave him the entrée into elite literary circles. His next poem, The Deserted Village, became a popular classic. Among his plays, She Stoops to Conquer was a huge success, and it has never dropped out of the repertoire. There are many stories about Goldsmith’s odd character, many of which represent him as awkward, naïve, melancholy, accident-prone and always in debt, but also as a generous and simple-hearted friend. He never married, but was in some sense adopted for a time by the Horneck family, with whose young daughter Mary he was probably in love. He died in 1774, greatly mourned by his friends, eight years after the publication of The Vicar of Wakefield, which was his only novel.