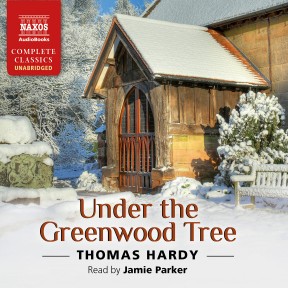 Under the Greenwood Tree

Under the Greenwood Tree is an affectionate and youthful portrait of a world Hardy knew well – village life in ‘Wessex’ – in which a romantic tale is set against changing circumstances. The traditional feature of local music-making performed by the village band and choir is challenged by the modern innovation of organ and organist providing music in the church. Fancy Day, the new, comely school mistress is also an accomplished organist, and these qualities create conflict in the village, especially when the unmarried young vicar and Dick Dewy, a member of the Mellstock parish choir vie for her attention. In this, only his second published novel, Hardy presents one of his most gentle and charming pictures.

This early Hardy novel tells the story of a pastoral romance in the small Wessex village of Mellstock. Jamie Parker’s friendly, resonant tone adds warmth to a surprisingly cheerful work by an author known for his dour stories. Parker’s use of vocal variation in delivering Hardy’s descriptive prose guides listeners smoothly through the plot. He also demonstrates mastery in his renderings of local country dialects. The conversations between the choir members, who include an interesting range of ages and characterisations, are especially well performed, and his singing of various songs also enlivens the text. Overall, Parker’s charming performance adds much personality to this Hardy classic.

Hardy chose the title for his second published novel, printed in 1872, from the well-known song in As You Like It, and it is a singularly apt one. Like the Shakespeare play, Hardy’s story is a pastoral idyll, which is dominated by love’s confusions, while music and poetry play a significant role in the plot. Even Hardy’s warmest admirers would not deny that this novel is a slight work, but it is of great interest in foreshadowing so much of what was to come later from Hardy’s pen.

First there is the centrality of love-affairs that are complicated by class divisions. The flirtatious Fancy Day, newly arrived in the village as a schoolmistress, attracting three highly contrasting admirers, is clearly an earlier version of Bathsheba in Far From the Madding Crowd. She finally gives her heart to William Dewy, and here Gabriel Oak’s love for the fickle Bathsheba comes immediately to mind; but there is also a strong resemblance between William Dewy and Giles Winterbourne in The Woodlanders, who is in love with his social superior, Grace Melbury. In no Hardy novel does the course of true love ever run smooth, but in Under the Greenwood Tree, love’s trials provide material for light comedy. As Hardy’s work progressed however, his view of love grew darker and darker, until it became only a prison-house of emotional conflict, disappointment and tragedy. The source of this transformation is clear enough in Hardy’s own life. In 1870 he met and fell in love with Emma Gifford, a clergyman’s daughter significantly above Hardy in social status. They married in 1874 but their marriage descended into a bitter mutual disenchantment, and they lived together for years on terms of cold, loveless hostility, which filled Hardy’s novels with tragic despair, and which ended only with his wife’s death in 1912.

The romance between William Dewy and Fancy Day would not, I think, enthral anyone very deeply, but the feature of Hardy’s work that is first revealed here is his portrayal of the Dorset peasants, the working men of farm and village who seem to embody the soul of the common man and the essence of the English rural character. It has often been said that these rustics form something like the chorus in a Greek play, commenting on the action yet distanced from it. They are scarcely individuals, rather they seem to share a common mind and speak with a common voice. They are never the principal actors in the drama, to whom they are always socially inferior, and they are apparently immune to the passions of love, pride, and mental anguish. Yet they watch and partly understand the leading figures, and wonder at their complex, dramatic lives.

All this is generally true, but here the rustics are central to the narrative, because they form the Mellstock village choir and music consort, and the second plot-line of the book is the plan of the new vicar, Maybold, to ban them from performing in the church and replace them with a harmonium. This was a theme dear to Hardy’s heart, for he had grown up loving the old-fashioned viol music of the rural church, in which his own father and grandfather had excelled, and something very close to this story had indeed happened in his own church at Stinsford. In reality, the demise of a choir in the face of the prim, respectable Victorian harmonium, played very often by the vicar’s wife, was a blow to the traditions of the peasant community. In the novel the two plots are linked by the fact that the new player is not the vicar’s wife, but Fancy Day herself, with whom the vicar proceeds to fall in love.

Hardy’s two earlier novels – The Poor Man and the Lady (which was never published) and Desperate Remedies – had both been social novels with urban settings, but here we see the first appearance of the Wessex novel and the Wessex character that made Hardy’s name. He gave the novel the sub-title A Rural Painting of the Dutch School, and this clearly referred to the joys and tribulations of the village rustics and the fate of their choir, rather than to the slight love-affairs of Fancy Day. These rustic characters and the homely poetry of their speech was something new in the mainstream English novel, and it was highly successful with both critics and public. They took delight in scenes like the one which opens the novel, where the men of the choir assemble on a cold and starry Christmas Eve, first to sing carols around the village, second to drink cider, and third to marvel at the momentary glimpse they have of the ethereal beauty of Fancy Day. This was in fact to be the opening scene of the extended multi-volume chronicle of Wessex life which Hardy would shape over the following twenty-five years.

For Hardy himself, the story and the people of Mellstock choir had a deep personal significance, and they re-appear in several very delightful but very contrasting poems that he wrote. The first is entitled ‘Friends Beyond’, in which the poet communes with their ghosts after their death:

Closely related is ‘The Dead Quire’, which laments:

For two-score years, ere Christ-day light,
Mellstock had throbbed to strains from these
But now there echoed on the night
No Christmas harmonies.

‘The Rash Bride’ is an extraordinary tale of romance and tragedy among the rustic musicians, but it is too melodramatic to be convincing. The best of these poems is undoubtedly ‘The Choirmaster’s Burial’, which is close in theme to Under the Greenwood Tree, for here the old choirmaster’s dying request for music to be played over his grave is brushed aside by the impatient vicar; but he in turn is shocked and chastened when that very night he sees a vision of angels singing and playing over the old man’s grave. This picturesque legend is the perfect pendant to the novel, and should perhaps be published as an appendix to it.