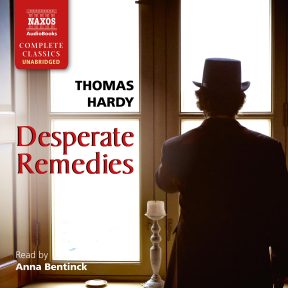 Thomas Hardy’s first published novel, Desperate Remedies is a thrilling blend of Gothic mystery and love-triangle romance. After the untimely death of their parents, Cytheria and Owen Graye must go out into the world and fend for themselves. Cytheria’s journey leads her to the dark and mysterious household of Miss Aldclyffe, a capricious and eccentric woman, who steers Cytheria into a love affair with her charismatic steward Aeneous Manston. All is not what it seems, and Cytheria finds herself entangled in a violent web of lust, murder, deception and blackmail. With its beautiful and evocative scenes, along with themes of fate and class, the novel contains many traces of Hardy’s signature style, and is a unique take on the Victorian ‘sensation’ novel.

Hardy’s first novel, published in 1871, suggests the promise of his future acclaim in the polished prose, elegantly described scenes, and themes involving fate and class. However, with its decidedly dark tone, this novel fits firmly with the popular gothic romances of its day, and its sensationalist elements raised eyebrows on its publication. The winding plot follows the plight of orphaned young Cytherea. She finds employment in an eccentric woman’s household, where all is not as it seems, and is led into a disastrous love affair. Driven by a suspenseful mystery and a love triangle, the story will have listeners on the edge of their seats. In her precise diction and smooth English accent, Bentinck creates the feel of a full-cast reading. Characters are uniquely depicted, with accents underlining class distinctions and tone revealing a wealth of emotions. A classic for those who enjoy works by Charles Dickens, Wilkie Collins or the Brontës.

The debut novel of author Thomas Hardy, originally published in 1871, Desperate Remedies is a classic Victorian novel now available in a ‘Naxos Complete Classics’ unabridged audiobook rendition, superbly performed by BBC Radio professional Anna Bentinck. Set in the Victorian era, the story follows the impoverished young woman Cytheria Graye, who by necessity takes a job for the wealthy and eccentric Miss Aldclyffe. Aldclyffe deliberately grooms and pressures Cytheria into a love affair and potential engagement with her charismatic steward Aeneous Manston, but malicious secrets lurk beneath the surface. Did Aeneous’ previous wife truly perish in an accidental fire? A tangled tale of love, lust, crime and blackmail, Desperate Remedies is as captivating today as it was nearly 150 years ago. Highly recommended, especially for public library audiobook collections.

Anna Bentinck valiantly works to keep Thomas Hardy’s early story of love and deception consistently compelling. An unconventional narrator, Bentinck takes pauses in unusual places, injecting a note of spontaneity into Hardy’s occasionally hard-going descriptive passages. Hardy’s story is highly character driven, and while Bentinck’s style doesn’t quite make the most of the variation in character, her dignified portrayal of each of the cast proves empathetic and humanising, thereby grounding the drama in realistic emotion. Though she occasionally resorts to slightly hammy accents, her sensitivity to the mental state of the characters is charming and engaging, and drives the listener through the stodgier sections of Hardy’s prose. This proves all the more rewarding once the plot picks up and the book itself becomes irresistibly interesting.