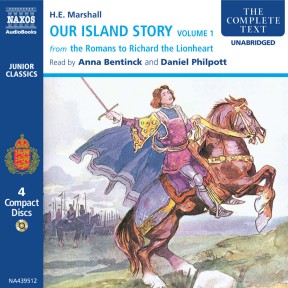 The Romans to Richard the Lionheart

Naxos’s recordings of H. E. Marshall’s Our Island Story is a jewel in the crown. Written at the height of Edwardian confidence in the British Empire, it tells the history of Britain from its beginnings to the death of Queen Victoria. This is exactly what children need to counter the disconnected history now taught in schools. Read by the dulcet Anna Bentinck and the noble-sounding David Philpott, with stirring music from Naxos’s library of recordings, each of the three volumes give a child five hours of fun.

History has all the best stories, and all the best histories are more compelling heard aloud. The immediacy of H. E. Marshall’s Our Island Story turned several generations of twentieth century children into history addicts. Long-rubbished by the politically correct, it has just enjoyed a centenary renaissance in print, and could do even better as an unabridged audiobook as much for parents as children.

Here is the history that we grew up on: Boadicea and Caractacus standing up to the Romans, King Arthur and his Round Table, Alfred burning the cakes, Blondel seeking out Richard the Lionheart, the princes in the Tower, Guy Fawkes, Bonnie Prince Charlie, Wolfe at Quebec, Wellington at Waterloo, Florence Nightingale, the Black Hole of Calcutta and the relief of Mafeking. Some of the euphemisms will raise belly-laughs (the Romans “were rude to Boadicea’s daughters”) but there is much still to stir the spirit.

Henrietta Elizabeth Marshall admitted that it included fairytales as well as history, but she was wise about the value of legends and myths to a nation’s sense of itself. Narration is divided between Anna Bentinck and Daniel Philpott.