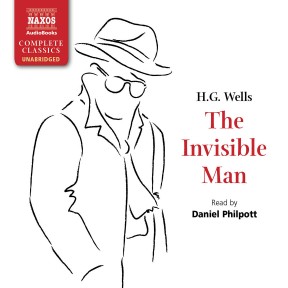 A stranger arrives in a small English town, wreathed in a hat, coat, goggles and bandages. It’s not just his identity he’s hiding, though; he has discovered the secret of invisibility, and believes it will lead him to ultimate power. But he needs to be able to control the process, and when the terrified villagers refuse to help him, he decides on bloody revenge. An immediate success when it first appeared, H.G. Wells’s adventure is at once chilling and thrilling, and one of the undisputed classics of science fiction.

Can you handle the unfamiliar? Is the fear of the unknown too much to handle? Science fiction great H. G. Wells asks these questions through his characters in the classic, The Invisible Man.  Griffin, a fanatical scientist, has successfully manipulated his body’s chemical structure and is now invisible to the human eye. Unable to revert to his original state, he is instantly ostracized by others’ fear and is forced to lie, cheat, and steal to maintain even the poorest of lifestyles. Hurt and alone, Griffin chooses to embrace his ability to incite terror, but soon succumbs to madness and must face the mob that he has created. Daniel Philpott’s accents bring Wells’ cast to life and produce a rhythm that truly does this famous story justice.

It is difficult to imagine a character better suited to audio than an invisible man. Wells’s “grotesque romance,” particularly as read by Daniel Philpott, makes for riveting listening under any circumstances (though it is perhaps best savored in the dark) and can be enjoyed by audiences of all ages. As several other excellent audio editions of this 1897 tale have already been released—e.g. from Tantor Audio, with Scott Brick reading, and Blackstone Audio, with James Adams reading—the question for libraries not yet owning this classic on audio is which recording to acquire. Philpott’s powerful performance makes this Naxos edition the prime choice.

A harrowing read from cover to cover, The Invisible Man is perfect for the audio format. The action-packed plot, eccentric characters, and entertaining dialogue could overwhelm a narrator, but British actor Daniel Philpott is the man for the job. His voice is energetic throughout the book and echoes the author’s ironic tone. His vocal characterisations are wonderfully diverse, running the gamut from elderly busybodies to country constables. Much of the dialogue is exceedingly humorous because of Philpott’s range of accents. The Invisible Man, insanely egotistical, is brought to life by Philpott’s portrayal of his infuriated outbursts and scattered thoughts. Even though Wells’s protagonist is difficult to imagine, Philpott’s narrative skill makes it clear why this novel is such a memorable classic.

Originality is rare and overrated. It is not often that the core idea of a work of art is completely new, and if it is the idea alone that is original then there is frequently not very much art to be found. Herbert George Wells is frequently referred to as an originator, an inventor, a father of the genre of science fiction. But the continuing appeal of his best stories is not so much in their innovative nature as in the way he took an idea and made it modern, stingingly relevant to his own time and to ours.

The Invisible Man is an example. The central idea has been around for at least 4,000 years in the West (a version of it is discussed by Socrates), but has very likely existed since the very first members of humankind were able to say ‘What would you do if you were invisible?’ to each other. The theme has re-emerged in everything from Germanic myth to Tolkein’s Middle Earth to Harry Potter. The idea of invisibility is utterly beguiling, for two interconnected reasons: it enables (at least potentially) actions without consequences and observation without being discovered. And from the first, the moral implications of this power have exercised thinkers, writers and artists. There is the initial moral query – if you weren’t going to be caught, what would you do? This is generally answered with: ‘Anything!’ suggesting that the morality that humanity prides itself on is based on a rather flimsy fear of punishment. This leads to a deeper, second question – what does it say about your character that you would break the moral codes if you could avoid retribution? And therefore how moral are you and your choices?

Wells felt the
social obligation
of monogamy to be
profoundly wrong;
he preached and
practised free love

Socrates is rather more optimistic than Wells on the idea of human morality; but he is much less thrilling to read. Wells was a passionate devotee of science and its power to transform, but he was also an angry critic of certain core tenets of the world in which he grew up. Allied to these radical notions were the imagination of an enthusiastic young man, the frustration of his earlier years and a journalist’s speed of execution. The result was four classics of science fiction in just three years – The Time Machine, The Island of Dr Moreau, The Invisible Man and The War of the Worlds. In all of them, he sees a dark and violent vision of Victorian society degenerating into brutal repression, with mankind largely impotent and science corrupted by power. This bleakness would have been rather daunting were it not offset by Wells’s vigour and Boy’s Own sense of adventure. His novels are short, immediate and atmospheric, with so much action and cliffhanging suspense that the underlying social critique is hardly apparent, unless one chooses to look.

Wells was born Herbert George, but known as Bertie, and lived in the kind of poverty usually described as lower middle class, but which equated to a very lowly form of misery. His parents ran an unsuccessful shop, and their income was increased by what his father could earn as a professional cricketer. But even that was stopped when he broke his leg, and with the family facing real poverty, the mother went back to work in service, and the boys (there were two other brothers) were apprenticed out. Bertie, who had found solace and inspiration in books and ideas, went into drapery, but after two years managed to persuade his parents to let him out of his contract, so deep was his wretchedness. He managed to continue his education, at which he excelled, becoming fired with a sense of the possibilities of science, in particular Darwinism. He went on to teach, but had already started writing, and had decided that was how he wanted to earn his living. Within three years, he was one of the best-known writers in England, and for the next 30 or so he was one of the most successful and influential writers in the English language.

His radicalism could be traced back to his childhood – its repressions, its limitations, the grimness of the family’s home-life, the middle-class Victorian morality that crushed individuality under the heavy cloth of acceptable convention. He raged against the inequities of life for the poor, mocked the institutionalised repression of women and men, and created warmly comic characters who struggle against them. But it may also be traced to the fact he was an imaginative and passionate man who wanted to address palpable injustices, and thought books were a short-cut to the imagination and intelligence, and thus to action – as they had been for him. Some of his ideas now seem entirely reasonable: a league of nations, a world encyclopaedia, sexual equality. Some seem radical but understandable: Wells felt the social obligation of monogamy to be profoundly wrong; he preached and practised free love, fathering at least two children outside his second marriage.

But some of his beliefs seem to demonstrate precisely the dangers of science stripped of humanity that he warned against in his earlier works. He believed in eugenics, in the capacity to improve mankind’s development by essentially selective killing; and although his views on race-hate seem to suggest a sympathy for the victims, there is little doubt that he was a racist. His contradictions are to some extent a product of his time; he was by no means the only liberal socialist to promote sterilisation, nor the only pacifist who came to support the First World War (although Wells was the one who coined the term ‘war to end war’).

But he should have known better. In The Invisible Man, the central character convinces himself of his status outside the law, imagines he will hold ultimate power and intends a reign of terror, all on the basis of a freak of science that he cannot control. Wells took an old, old idea, made it sound chillingly plausible by tapping into the social and scientific concerns of his time, and wrapped the whole thing up as an adventure story. That’s why he is an original.