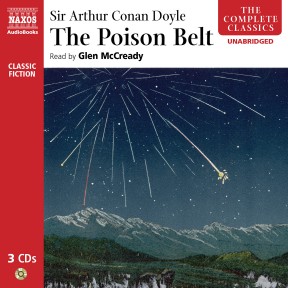 The sequel to The Lost World, Arthur Conan Doyle’s Poison Belt reunites the ever-popular Professor Challenger, intrepid journalist Edward Malone, dashing Lord John Roxton and the querulous Professor Summerlee for yet another adventure. When a sinister poison envelops the earth, the entire human race teeters on the brink of destruction, forcing the comrades to implement a desperate plan for survival. A cryptic telegram, a mysterious airborne poison and an eerie journey around post-apocalyptic London, this is vintage Conan Doyle. Glen McCready’s exhilarating reading brings all the tension and excitement of this classic tale vividly to life.

Professor Challenger, his wife, journalist Malone and adventurer Roxton have gathered with oxygen canisters to watch the final hours of the world. As a poisonous miasma apparently asphyxiates the human race, Malone feverishly writes his copy. More than just SF, this is Conan Doyle’s post-First World War message of hope. Read with gusto.

In Doyle’s short novel featuring Professor Challenger, the earth moves through a poisonous belt of the ‘ether’ – the stuff supposedly filling space – and the protagonists of the first Challenger novel, The Lost World, reunite to observe what seems to be the end of all life. The book, though a classic of science fiction, is painfully dated in its science and in its casual racism, which only surfaces occasionally but is off-putting. But Glen McCready’s genial reading helps. He supplies appropriate voices for the major characters, including the rumbling, bull-like Professor Challenger, his dainty wife, and the drawling Lord Roxton. Overall, McCready delivers the somewhat talky text with careful expressiveness, helping to bring it to life. It’s entertaining for those who can overlook the book’s deficiencies.

The Poison Belt (1913) is the second in the series of Conan Doyle’s Professor Challenger books. The first, The Lost World, was published just a year earlier, but the others were not written until the First World War was over, and Conan Doyle had become even more convinced of the validity of spiritualism. It was to be more than enough for his literary immortality to have created Sherlock Holmes (his immortality or otherwise in the spiritual world is not within the remit of this introduction), but in Professor Challenger and his adventures he provided the reading public with not just a new hero but a pioneering development of a new genre.

Science fiction (or sci-fi as it has become known) is not new. Imagining unreachable landscapes and placing humans there to deal with what they find is essentially as old as writing itself (Dante’s Inferno, for example, or any vision of the afterlife). But Conan Doyle had read and loved some of the earliest and best exponents of it in its more immediately recognisable modern form – the work of Jules Verne and H. G. Wells, for instance. These writers were doing what the best sci-fi always does – commenting on the present through a particular branch of the imaginative arts. The ‘science’ in science fiction is, naturally, crucial too.

As developments in technology changed the physical landscape (heavy industry, telecommunications, cars and aeroplanes), and the reach of the scientists moved into every aspect of human life (medicine, evolution, astronomy, philosophy), the potential was as terrifying as it was thrilling. Science fiction addresses these fears, in part through exciting the reader’s desire for thrills and danger, but also in allowing a broader comment on societal attitudes towards difference, change and humanity in general. Wells has become the great British well-spring for this – specifically with The Time Machine and The War of the Worlds – but Conan Doyle has more right than many to be given similar credit. In the Professor Challenger books he not only uses similar extra-terrestrial (or extra-temporal) threats to civilisation, he also offers readers a humanist, scientific and rational basis for hope; and manages to do so in characters that are as ebullient, active, individual and arresting as their creator.

Arthur Conan Doyle was born in Scotland in 1859 to a father who was a drunken epileptic, eventually incarcerated in a lunatic asylum – and a mother of great strength and imagination, whose story-telling enchanted Arthur. He became a doctor, but had always enjoyed writing, and when he finally decided to give up medicine he was so relieved and happy that he threw his handkerchief up to the ceiling in delight. But his training in the sciences proved a vital element in his fiction, and one of his tutors at university, Dr Joseph Bell, even proved a model for Sherlock Holmes. But perhaps more importantly, Conan Doyle believed in science as a means of explaining the world. He was a disciple of rationalism, of observation, of experimentation and fact. This may not seem to tie in comfortably with his later beliefs in fairies and psychic phenomena, but as Professor Challenger himself points out:

‘…none of us can predicate what opportunities of observation one may have from what we may call the spirit plane to the plane of matter. It surely must be evident to the most obtuse person […] that it is while we are ourselves material that we are most fitted to watch and form a judgment upon material phenomena.’

And so Professor Challenger makes a point of challenging the hysteria of the press and the complacency of the establishment. In this he is assisted by three companions – a sceptical scientist, a professional adventurer and a somewhat idealistic young journalist. Although they represent ‘types’, and offer the author a chance to discuss ideas through their differing perspectives, they are also appealing as people in their own right. Summerlee, the scientist, querulously irritated by Challenger’s assumption of superiority; Roxton, the adventurer, rather languid in the face of danger; and Malone, the journalist, an Everyman of sorts – if, that is, Everyman were in the habit of taking life-threatening risks to prove his manliness.

In their first adventure, The Lost World, they had travelled to a remote plateau to record the existence of dinosaurs that had escaped the normal currents of evolution. In The Poison Belt, rather surprisingly most of the action takes place in Challenger’s house in Sussex (the English county where Conan Doyle himself once lived). Here the four, together with Challenger’s devoted wife, watch what appears to be the end of the world as a cloud of poison ether approaches. It’s a remarkably compact novel, but despite its brevity it is full of compassion. Challenger for example – a huge, arrogant, but immensely likeable figure – displays touching tenderness to his devoted wife. All of them show humility and humanity as they observe the encroaching poison.

Significantly, this humanity is the greater moral running through the story. The world is at the mercy of forces far more superior than Man can understand, far less oppose; the end could be just around the corner. But rather than see this as a cause for pessimism or nihilism, the book suggests that it should lead to a development of the more tender aspects of mankind’s abilities – care for each other, disinterested investigation, a quest for understanding and a desire to make the best of what uncertain time one may have left.

The approaching apocalypse, despite the speed with which it envelops the Earth, has a dangerous impact on behaviour – there are riots, for example – but it does give people just enough time to try to repair their fractured relationship with whatever divinity there may be, driving them into churches. But they are helpless there; only the knowledgeable scientist with a vigorous imagination (and a convenient combination of a boudoir, oxygen canisters and some varnished paper) can help himself. There is more than an element of pure good fortune in the final escape. The Poison Belt could easily have reflected despair at the way the world was going – it was written just a year before the Great War, after all – but instead it offers a positive, even glowing, element of justified hope.