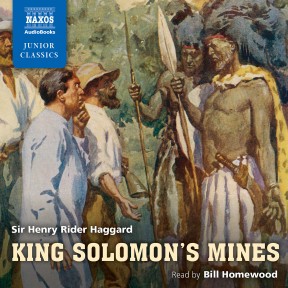 King Solomon’s Mines is set in nineteenth-century Africa. Allan Quartermain, hunter, is commissioned by the valiant Sir Henry Curtis and his jovial friend Captain Good to lead them to the fabled lost mines of King Solomon. In the company of these dauntless men we undertake the most exciting safari ever described. We hunt big game, we go to war with the terrifying King Twala of Kukuanaland and his diabolical henchwoman Gagaoola – and are amazed by the twist at the end.

Those longing for African heat should check out Naxos’s recording of King Solomon’s Mines. Naxos have been quietly making some of the best recordings of Victorian and Edwardian children’s classics around, and this joins their excellent E Nesbit audiobooks as a must-have. Although my children began by squeaking, “That’s racist!”, and we were all appalled by the description of the elephant hunt, the thrill of Rider Haggard’s yarn is undiminished. Bill Homewood’s ability to summon up the entire cast, from Sir Henry Curtis, Dr Goode and beautiful Foulata to the evil King Twala and the witch Gagool, is magnificent. He gets the clicks, the accents, the rhythm of the prose and the feel of Africa spot on. The music, a mixture of Max Steiner’s original score to King Kong and Gottschalk’s Night in the Tropics is powerfully evocative. I tried vainly for years to get my kids to read this book, and they listened agog as the four adventurers struggle across the burning desert, over Sheba’s Breasts and into a lost kingdom where their former servant and the rightful king must fight a battle. If you have children of 10+, this is my choice for audiobook of the year. I only hope Naxos go ahead with She and Allan Quartermain next, because despite Rider Haggard’s lack of political correctness, these are tales from a time when both Englishmen and Africans understood what heroism meant.