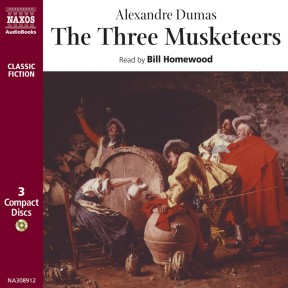 In The Three Musketeers, one of the greatest adventure stories ever written, we follow the fortunes of the dashing young swordsman D’Artagnan and his daredevil companions Athos, Aramis and Porthos. As the thrilling story unfolds, ‘The Four’ find themselves embroiled in duels, love-tangles and sinister intrigues which threaten the future King, Queen and France herself.

This swashbuckling classic is set in Louis XIII’s France at the same time as Descartes’ wanderings took him in 1627 to La Rochelle, whose Huguenot occupants were being besieged by Cardinal Richelieu. Dumas’s cardinal, one of the book’s many real-life characters, is simultaneously laying devilish plans to be rid of d’Artagnan and his fellow musketeers Athos, Porthos and Aramis. I’d forgotten how complex the plot is, how relentless the action (you can’t cut to the chase – the whole thing is one long desperate chase on horseback, in postillions, aboard ships) and how outrageous the characters. There’s no grey in Dumas’s novels, especially where women are concerned. The goodies, such as saintly Constance Bonacieux – with whom our brave, penniless, honourable, hot-headed young hero from Gascony, d’Artagnan, is in love – are purest snowy white. The baddies, represented by beautiful, treacherous Milady de Winter, once bigamously married to Athos and now working as a spy for Richelieu, make Madame Defarge look as dangerous as Miss Muffet.