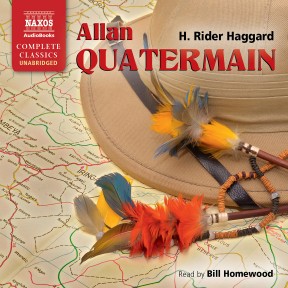 We have met the intrepid hunter-tracker Allan Quatermain before, in Rider Haggard’s marvellous King Solomon’s Mines. This time, grieving from the tragic loss of his son, Quatermain longs to return to his beloved Africa. He sets out in search of a lost white tribe, the Zu-Vendis, ruled by two beautiful sister Queens. Once again, Quatermain’s companions are the indefatigable Sir Henry Curtis and Captain Good, and the magnificent Zulu warrior Umslopogaas. The journey is incredibly dangerous, and thrillingly told. After a fantastic underground journey by canoe, our heroes are embroiled in a bloody civil war when both queens fall in love with the irresistibly handsome Curtis.

Excellent wine is described as having ‘a long nose’ – that is to say that the taste stays in the mouth for a very long time after sipping, and one is loathe to spoil it with further tastings. Sometimes this is also true of literature. The reader’s head can be so filled with the author’s fictional world that to visit another world too soon after is too cruel a thought.

In my sleeve notes for She by the same author, I mentioned the bereavement one feels when finally putting down a good book. It is not always possible to pick up another straight away. This is often because the novel has transported us to another place where we can happily lose ourselves, and suddenly, like the secret access to the land of Narnia behind the wardrobe in C.S. Lewis’s The Lion, the Witch and the Wardrobe, the door is shut, and we grieve. The bereavement is all the greater if, as we read the final words of the last paragraph, we are also losing a friend whom, in the course of the book, we have come to know and love.

Perhaps this is Haggard’s greatest skill. In She there is no question that Holly, the blunt, self-deprecating scholar, becomes at least a favourite uncle within a few chapters. By the end of the book, through Holly’s humility and surprising courage in the face of great danger, he has actually earned our love – and we miss his companionship terribly.

It is not always so with our heroes. In Victor Hugo’s brilliant Les Miserables, for example, we have a marvellous central character in Jean Valjean, and we follow his tormented odyssey with fascination, admiration and sympathy, as he bravely confronts many vicious twists of fate. At the end of the book we are satisfied, the tale is told, we have been copiously reminded of man’s inhumanity to man, honour and mercy have triumphed – and the world moves on. However, the very next day we can pick up another exciting book, step through another secret door, and lose ourselves again.

The book is
of its time,
and its
politics and
social
attitudes
essentially
benevolent

Many great writers transport the reader to pleasurable or fantastic places, but perhaps the factor that makes it so difficult to leave the magical worlds that H. Rider Haggard creates is his, and his reader’s, direct identification with the hero. Use of the first person in fictional narrative is an attractive but dangerous device, even more so when the tale involves the dramatic re-creation of memories. Incidentally, for the audio book performer this raises a difficult question: in remembered dialogue, is the central character, as narrator, a sufficiently talented mimic to be able to personify age, dialects and gender? In the case of Haggard’s heroes one is inevitably drawn to the conclusion that they are born raconteurs; rather than merely reporting the story, one can enter into its recreation with gusto, and without suspension of disbelief. The favourite, much-loved uncle would be the best possible guest at a party. After the party, when everyone has gone home, he is the one we miss.

Allan Quatermain, of course, is the favourite of favourites. Haggard himself could not put the character down, having introduced us to him in the marvellous adventure of King Solomon’s Mines. In She, the academic Ludwig Horace Holly finds himself drawn into unsought- for adventure, and acquits himself magnificently, whereas in King Solomon’s Mines and in Allan Quatermain, and in further retrospective novels by the same author, Quatermain actually seeks adventure. Despite his humility he is confident in his abilities. Were we to join one of these expeditions, we should always be glad of Holly’s wisdom and affability in extreme situations, but it is to the quick-thinking, experienced hunter and guide Allan Quatermain that we would turn first, as to a Superman.

What an adventure this is! And how cleverly Haggard introduces his hero in the first chapter! To explain why and how the book comes to be written in the first person would be to give away a major piece of the plot, which in real time spans a period of two years. Suffice it to say that at the opening of the book, Allan Quatermain is grieving for the loss of his only son:

We buried him this afternoon under the shadow of the grey and ancient tower of the church of this village where my house is. It was a dreary December afternoon, and the sky was heavy with snow… A robin redbreast came as bold as could be and lit upon the coffin and began to sing. And then I am afraid that I broke down, and so did Sir Henry Curtis, strong man though he is; and as for Captain Good, I saw him turn away too…

Quatermain’s companions Curtis (‘altogether a magnificent specimen of the higher type of humanity…’) and Good (‘short, dark, stout… with twinkling black eyes…’) are already familiar to us from King Solomon’s Mines. In the god-like nobility of one and the loyal courage of the other, we have the perfect foils for Quatermain himself. Though not as self-deprecating as Holly in She, Quatermain describes himself as a ‘small, withered, yellow-faced man of sixty-three…’ The three of them seem to sum up those qualities of ‘Englishness’ which Haggard so admires. He dedicates the book to his son, in the hope that it may inspire him to ‘the highest rank whereto we can attain – the state and dignity of English gentlemen’.

The novel picks up Quatermain’s life some years after his adventures in search of King Solomon’s Mines, and by a happy chance we travel once again with the magnificent Zulu Umslopogaas (‘the Slaughterer’), armed as ever with his dreadful weapon Inkosi-kaas (‘…which was nothing else but a pole-axe, with a beautiful handle of rhinoceros-horn…’). Umslopogaas embodies all that is most admirable in the Zulu warrior, and bravely accompanies our intrepid team into the most frightening of unknowns. It is he who, early in the story, reinforces our trust in the modest Quatermain, describing him as:

‘…slayer of elephants, eater-up of lions, Clever one! Watchful one! Brave one! Quick one! Whose shot never misses,

who strikes straight home, who grasps a hand and holds it to the death’

It is he who, towards the end, is ready to give his life for Quatermain’s cause:

On, axe in hand, he staggered, that dreadful-looking, splendid savage, and the ladies forgot to turn faint at the scene of blood…

Haggard’s treatments of women and of the native African seem to us today, though respectful, to be occasionally quaint and chauvinistic – but we should not judge him by modern ethical standards; the book is of its time, and its politics and social attitudes essentially benevolent. He loved both women and Africa, it is plain, and in his introduction to this last great adventure of the hunter Allan Quatermain, he writes: ‘Civilisation is only savagery silver-gilt’.

Henry Rider Haggard was born in 1856. His mother was an amateur novelist and his father a barrister and country gentleman. Henry was sent to Ipswich Grammar School, before taking a post in South Africa as secretary to Sir Henry Bulwer, Governor of Natal. At the age of 22 he was appointed Registrar of the Natal High Court, at which time he fell in love with an African woman, and became fascinated by Zulu culture and traditions. It is interesting that King Solomon’s Mines and She both feature a loving, brave, black African woman. He returned briefly to England and married a Norfolk heiress, Mariana Louisa Margitson, taking her back to South Africa, where they ran an ostrich farm. Eventually, with the intention of pursuing a career in the law, he moved back to Norfolk with Mariana, and was called to the bar at the age of 28.

Perhaps there was more of his mother in him than his father, for it was not long before he gave up his practice in order to write novels of adventure and discovery. He was excited by R.L. Stevenson’s Treasure Island, published in 1883, and wrote King Solomon’s Mines, introducing us to the great scout and hunter Allan Quatermain, in less than a week. The sequel, Allan Quatermain, took him only eight weeks. Haggard became an expert agriculturalist; among the many books which he wrote in a long career, several were on farming. For his services to the British Empire, both diplomatic and agricultural, he was knighted in 1912 and awarded the KCBE in 1919. He died in London in 1925.