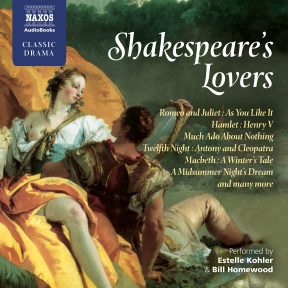 Many of the greatest lovers, and the greatest love scenes in Western literature are to be found in Shakespeare. The fresh but impassioned Romeo and Juliet, the resilient wit of Petruchio and Kate, the ardent exchanges of Lorenzo and Jessica and the anguished tragedies of Othello and Desdemona, and Antony and Cleopatra – they all show love and courtship in its many forms. The darker side of love is here too – the spine-chilling wooing of Lady Anne by Richard, Duke of Gloucester, and the control maintained by Lady Macbeth over her husband. But it is balanced by the buffoonery of Falstaff and Mistress Ford, and Pyramus and Thisbe. In their lively and imaginative selection, Bill Homewood and Estelle Kohler perform the finest love scenes from nearly twenty plays. 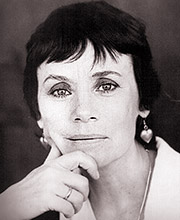 Estelle Kohler is an Associate Artist of the Royal Shakespeare Company. Her long career as a Stratford leading lady began with Juliet to Ian Holm’s Romeo, winning the London Critics’ Award. She has won other awards and nominations for a great range of work on stage, film and television.

Look up the word ‘love’ in a dictionary of quotations and you will, of course, find more famous lines by William Shakespeare than by any other writer. Love inspired him to write some of his greatest lines – lines which have slipped into the everyday conversation of English- speaking people around the world. All of Shakespeare’s lovers are paired as inevitably as Adam and Eve, all have the shared wit and heady sexuality of the young couple in the Old Testament’s Song of Solomon, and their stories are as timeless. Romeo and Juliet is certainly the favourite love story of all time. Even in India today, variations on the tale are the most common plots for novels and films.

The roles of Shakespeare’s lovers are gifts to the actors as well as the audience. Juliet, for example, only exists in performance; these are plays after all, not novels. On the page, Juliet is merely a buried diamond – and each actress, discovering her, cuts and polishes the jewel uniquely for display. I have never known an actress who, having once played Juliet, could quite let go of the part afterwards. Shakespeare’s ability to step so sensitively into the whirling mind of young Juliet, wilfully planning a night of love with Romeo (‘Gallop apace, you fiery-footed steeds…’) is remarkable. It is this skill at portraying both the man and the woman’s feelings, coupled with an abiding humour, which makes his love scenes so attractive. There is nothing so sexy as a shared sense of humour, and Shakespeare’s lovers are well-matched in this respect. In The Taming of the Shrew, for example, Petruchio softens Kate’s resistance in their first encounter as much with skilful wordplay as by any other means: ‘Where did you study all this goodly speech?’ she asks, with real curiosity.

Everyone in Shakespeare’s day would have had a huge repertoire of bawdy songs and verses, and Shakespeare capitalised on this in all his plays. This folk culture is unfortunately newly lost to us in an era of television and video games, and a good deal of the sexual innuendo in the plays is missed by the modern audience – making the job of playing one of Shakespeare’s naughty clowns much less rewarding – and harder work – for the actor today than it would have been in the sixteenth century. The ribaldry and scatology in the comedies is, however, as much to be found in the love scenes as in the comical gobbledygook of the clowns: ‘Who knows not where a wasp does wear his sting?’ asks Petruchio, answering himself: ‘In his tail.’ Kate responds: ‘In his tongue.’ ‘Whose tongue?’ he presses. ‘Yours, if you talk of tails; and so farewell.’ ‘What! With my tongue in your tail?’ Game, set and match. ‘Who could be out , being before his beloved mistress?’ asks Orlando in As You Like It. ‘Not out of your apparel – and yet out of your suit!’ replies Rosalind. Of course, all Shakespeare’s women were played by men; this must have added an extra frisson to the love scenes. In this scene, for instance, Rosalind was a male actor dressed up as a girl disguised as a man pretending to be a girl! Something for everyone!

Because his plays were for the most part performed in the open air, in daylight, they move fast. Shakespeare had no such things as blackouts and curtains to hide scene changes. Everything is in the text – Shakespeare’s actors must therefore be painters as well as interpreters. He does not transpose easily to the screen largely for this reason. Cutting one of his scripts for film means either losing some of the greatest lines or doing the same job twice: once in the lines, and again with the lens. The thrill of Enobarbus’s lyrical attempt to recapture the legendary magnificence of Cleopatra’s entrance: ‘The barge she sat in, like a burnished throne/Burned on the water…’ would be seriously undercut by any film-maker’s attempt to recreate the event. Recording these scenes for audiobook, of course, is a joy – no blackouts or curtains here – just us and Shakespeare.

Shakespeare obviously cared for his lovers. It is fascinating to discover that the very first time they meet, Romeo and Juliet are instantly unified, like two halves of a puzzle, by a shared sense of humour expressed in fast-thinking, rhyming verse. More remarkable still, this verse is in the form of a strict Elizabethan sonnet – a fact that is not particularly for us to notice, but demonstrates the writer’s own love of the youngsters. From the gloriously loose-limbed prose of Rosalind and Orlando in As You Like It to the impeccably-turned, lyrical and witty verse of Lorenzo and Jessica (‘The moon shines bright…’) in The Merchant of Venice; from Troilus and Cressida’s corrupted imbroglio to the fading luxury and whimsical hedonism of the two passionate lovers in Antony and Cleopatra, Shakespeare has given all of us, actors and audiences, gifts to treasure and be inspired by.