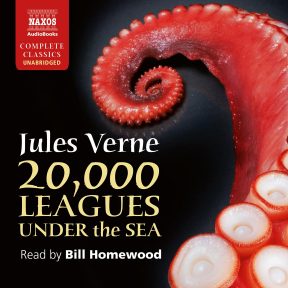 The year is 1866 and the maritime world is gripped by fear after reported sightings of a huge sea monster. Famous marine biologist Pierre Aronnax, accompanied by his loyal servant Conseil and the redoubtable Canadian harpooner Ned Land, joins the hunt to track down and incapacitate the creature. But their enemy is no sea beast… and they soon come face to face with the sinister Captain Nemo. The story is relentlessly thrilling, while containing beautifully written observations of underwater life.

Jules Verne’s fascinating novel takes the listener on a journey beneath the sea to the far reaches of the world. The figure of Captain Nemo provides a dark undercurrent to the optimism of Verne’s narrator, Pierre Aronnax. Bill Homewood’s narration is truly delightful. His melodic cadence delivers the descriptive prose engagingly, and his vocal characterisations are also convincing. As Professor Aronnax, he enthusiastically expounds upon scientific explanations, adding excitement to what could be dry bits of text. Ned Land has a gruff, burly voice, while the mysterious Captain Nemo speaks in a slightly foreign accent. Homewood’s narration invites the listener onto the Nautilus and a world of undersea adventure.

Jules Verne’s fascination with the sea began in the great French seaport of Nantes, where he was born in 1828. Such was his passion for ships that in 1839, when he was only eleven, he ran away from home to be a sailor. His adventure did not last long however, and after returning home in disgrace, he promised his distraught mother: ‘After this I will travel only in the imagination’. But it would be many years before he could give free rein to his imaginative powers.

At this time, underwater exploration was in its infancy

In 1848 he was sent to Paris to complete his studies as a lawyer. Radical socialist thinking was sweeping through Revolutionary France and Verne was drawn to the radical writers, scientists and musicians of the time. He turned his back on his studies and became the secretary to the Théâtre Lyrique. During this time he wrote several plays and short stories, but he had little talent as a dramatist. In 1856, Verne married a young widow, Honorine Morel. She already had two children, and in order to support his new family, Verne took a job on the Paris Bourse.

However, Verne did not give up on his literary ambitions. He continued to write, and his friendship with the radical Pierre-Jean Hetzel was to prove crucial. Hetzel started a magazine for young people and Verne became one of its most popular contributors. Now Verne was able to combine his lifelong fascination for geography, science and technology with his talent for entertaining and accessible writing, and his first successful novel, Five Weeks in a Balloon, was published in 1863. Next came Journey to the Centre of the Earth, an extraordinary exploration of the earth’s core, followed by From the Earth to the Moon. 20,000 Leagues Under the Sea was published in two parts in 1869 and 1870.

At this time, underwater exploration was in its infancy. A diving apparatus had been introduced in 1865, but compressed air was not used until 1875. Thus he used primitive new technology and took it into near realms of sophistication, while still remaining well within the limits of possibility; this understanding of technology imbues his writing with the vital ingredient of all fine science fiction: plausibility. Verne was also the master of adventure and suspense, but his political ideas were never far from the surface. Through Captain Nemo, he was also able to explore his abiding interest in the freedom of the individual: Nemo could only really be free under the sea, beyond the control of oppressive nation states.

Verne’s abiding popularity lies therefore in his extraordinarily prescient view of the future, his huge talent as a storyteller, and in his fascination for the natural world and the men who are destined to explore its mysteries.