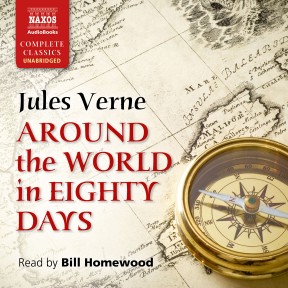 Around the World in Eighty Days

Undoubtedly one of the most celebrated tales of all time, this is both high-octane thriller and fascinating travelogue. Phileas Fogg, intrepid Victorian gentleman-about-town, accepts a wager that he cannot travel around the world in 80 days. Naturally, he immediately sets off, accompanied by his French manservant Passepartout. They are pursued by a police officer, Detective Fix, who is foolishly convinced that Fogg is a bank robber. Much hilarity ensues. On the way, Fogg bravely rescues Aouda, a beautiful Indian princess, from a ceremony of ritual sacrifice. Unexpectedly, our thriller becomes a love story.

The next big BBC thing is an eight-hour serialisation of Jules Verne’s famous book, with David Tennant as the imperturbable Phileas Fogg. It’s worth getting to know the original, especially as read by Bill Homewood, who thrillingly conveys tension. The tale is as rapid as the express trains and steam-assisted sailing ships that power Fogg’s journey. Knockabout humour is provided by his French valet, Passepartout, and love interest by the Indian princess Aouda, who is saved from suttee by Fogg. Meanwhile, Detective Fix’s attempts to arrest Fogg as a bank robber have disastrous effects. A balloon does not feature in the original story, but there is a splendid elephant.

Jules Verne was born in the French seaport of Nantes in 1828. In 1839, he stowed away on the Coralie, a ship bound for the West Indies, but was retrieved by his father. His father wanted Jules to become a lawyer, as he himself was, and sent his son to Paris in 1848 to train.

In Paris, Verne became part of the literary circle of Alexandre Dumas. In 1852, he passed his law exams and became Secretary to the Théâtre Lyrique, writing several unsuccessful plays.

The book was written as a serial and ran in the Paris newspaper, Le Temps, in real time

In 1856, Verne married a young widow from Amiens, Honorine Morel, who had two children, and they had one son of their own, Michel. In order to support his family, he became a stockbroker on the Paris Bourse.

As well as plays, Verne wrote many poems and stories for magazines, and in 1854 he published a fantasy novella, Master Zacharius. But his first real success came in 1863, with the publication of Five Weeks in a Balloon, followed in 1864 by Journey to the Centre of the Earth and, in 1865, From the Earth to the Moon. Twenty Thousand Leagues Under the Sea was published in two parts, in 1869 and 1870. Like many of Verne’s books, it shows his love of exploration and scientific discovery.

Verne was left crippled in 1886 after being shot by his nephew, Gaston, when he refused him money. But he continued to work, and wrote a total of 67 titles. He died in 1905.

Around the World in Eighty Days was Verne’s tenth novel. It was published in 1873, at the height of his powers, and it established his popularity in Britain – and in America, where it was the bestseller of the year, with sales topping a million. It achieved its greatest popularity in the twentieth century through Michael Todd’s film with David Niven in the title role.

Around the World in Eighty Days chronicles the dramatic dash from continent to continent by the eccentric Englishman, Phileas Fogg, who takes the challenge in order to win a wager. Fogg is very much a Frenchman’s idea of the English gentleman, a figure of extreme punctiliousness who is quite content to ‘let his servant do his sightseeing for him’. He is balanced by the excitable and warm-hearted Passepartout – perhaps a Frenchman’s idea of the true Frenchman.

The book was written as a serial and ran in the Paris newspaper, Le Temps, in real time, with the story and the journey ending on the same day at the end of December 1872. Fogg’s journey was followed keenly by readers, and episodes were telegraphed across the Atlantic.

It was a time when international tourist travel was becoming increasingly available to a wider section of people, and the details of visas, travelling methods and differing cultural traits was fascinating to the general reader.

The story falls easily into episodes, and the immediacy of the writing, mirroring the fast-moving pace of the action, makes it as gripping today as when it was first written.