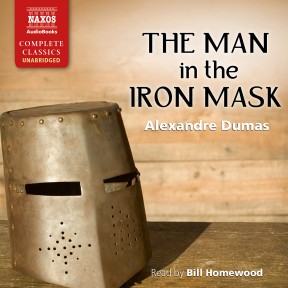 The Man in the Iron Mask

The Man in the Iron Mask continues the adventures of the dauntless heroes of The Three Musketeers – Aramis, Athos, Porthos and d’Artagnan. In old age their swashbuckling ought to have been replaced by a more gentle way of life, but the veteran warriors find themselves at the centre of a plot in which both hearts and heads are broken, and the very throne of France is at stake.

This gripping tale of valour and honour in seventeenth-century France continues the adventures of the proud heroes of The Three Musketeers by the same author. We now know them as venerable leaders; their swashbuckling has become diplomacy – though the sword is never very far from the hand – and Dumas skilfully enhances their legendary status through the characters around them:

He was a
generous,
idiosyncratic
and fun-loving
man who cooked
brilliantly

…’The musketeers! the musketeers!’ repeated they. And among all these brave men, the idea that they were going to fight two of the oldest glories of the French army made a shiver, half enthusiasm, half terror, run through them. In fact, those four names – d’Artagnan, Athos, Porthos and Aramis – were venerated among all who wore a sword, as in antiquity the names of Hercules, Theseus, Castor and Pollux were revered…

The musketeers, an elite royal corps, show unmatchable courage and quick thinking in the face of danger. They are specialists in the arts of killing, disguise and deceit, but we are drawn to them as romantic and attractive heroes – their actions always, of course, in a noble cause – imbued with the great French court traditions of politesse, flamboyant costume and honour. One of them bids his son, off to war: ‘…do not die without honour or advantage to France.’

Dumas writes with fun and dash, pushing the story on with repartee as fast as swordplay, earning the right, every now and then, to dwell on an especially important moment. For these lyrically written passages his unique skill is to spice his richly descriptive language with images of sense or taste, or with perfectly-timed details which underscore the mood of a scene or a character (‘…a bird of night uttered from the depths of the forest a prolonged and plaintive cry…’).

The book contains some of the funniest scenes Dumas wrote. Especially rich in comedy is the visit by Porthos to the King’s tailor, where Porthos is observed with fascination by Molière and, Dumas suggests, becomes the inspiration for the great writer’s Le Bourgeois Gentilhomme. This is typical; Dumas adds to the ‘reality’ of his work with a painstakingly researched and beautifully presented historical backdrop, and by the inclusion of actual people: noted artists of the Left Bank and ‘Le Roi Soleil’ himself (Louis XIV), among many others.

Alexandre Dumas wrote or collaborated on nearly 100 plays and many novels, including The Three Musketeers and The Count of Monte Cristo. He was born in 1802, the son of a general in Napoleon’s army and the grandson of a French Marquis and a Saint Domingo negress. As a child he lived through the upheavals of the Napoleonic Revolution and the subsequent restoration of the monarchy of France. He received his private education from a priest (like Monte Cristo). He was politically active and, though he is thought to have rather embellished the actions in his Mémoires, was involved heroically in skirmishes during the 1830 revolution. He was the father of Alexandre Dumas (fils), most famous for his The Lady of the Camellias. Alexandre Dumas (père) ran his career as an industry. It is thought that he would sketch the outline of a story to an assistant who would write it up; then Dumas himself would take the story by the throat and wrestle it into a masterpiece. He was a generous, idiosyncratic and fun-loving man who cooked brilliantly, gave a lot of money to cadgers and hangers-on, and spent prodigiously on his private life, most notoriously on various highly-publicised affaires and the construction of a monstrous folly of a house at Saint-Germain-en-Laye.