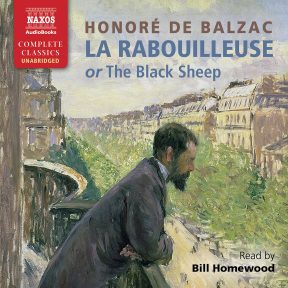 Brothers Philippe and Joseph Bridau are completely unalike: Philippe, braggart and soldier, formerly aide-de-camp to Napoleon, is their mother Agathe’s favourite; Joseph, a poor and aspiring artist, is raised in his brother’s shadow. When Agathe is reduced to poverty and Philippe accrues gambling debts, the family join forces to focus their attentions on Agathe’s brother, Jean-Jacques Rouget, heir to the family fortune. The struggle for his inheritance pits the family against Rouget’s beautiful maid Flore (‘La Rabouilleuse’), the apple of her master’s eye, and her lover, the crafty and manipulative Maxence. Will the greedy Philippe’s efforts save the family, or prove to be their undoing? Will the talented Joseph achieve the acclaim he deserves in the salons of Paris? All is revealed in the thrilling and compassionate denouement of this wonderful book. Also known as The Black Sheep and The Two Brothers, La Rabouilleuse is one of the Scènes de la vie de province in Balzac’s La Comédie humaine.