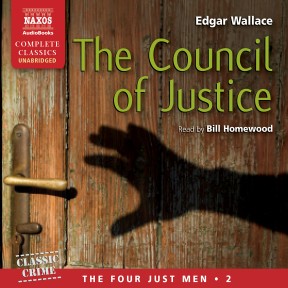 The Council of Justice

The Four Just Men, in this second of Wallace’s ingenious series of thrillers, pit themselves against The Red Hundred, an organisation dedicated to international anarchy, led by the charismatic, mysterious and beautiful assassin, the Woman of Gratz. As always, the avengers’ methods are meticulously planned and ruthlessly executed.

Just occasionally you get a narrator who is so perfectly matched to his material that you can’t help but smile. The orotund sonority of Bill Homewood’s voice gives a stately and cinematic intensity to Edgar Wallace’s The Council of Justice. Bombs and bombast, passion and punch-ups, and a mind-boggling escape from execution keep the listener agog.

Wallace’s classic crime novel – which marks the second appearance of his ’Four Just Men’ and was first published in 1908 – is given a distinguished reading by narrator Bill Homewood. The Council (as the Four Just Men are also known) is a group of wealthy, like-minded gentlemen who band together to deal out their own harsh and deadly judgements to criminals outside the reach of the law. This time around, the Council turns its attention to a dangerous group of anarchists called the Red Hundred, and its most captivating member, the mysterious Woman of Gratz. Homewood’s rich, eloquent narration fits perfectly with Wallace’s tale of post-Victorian intrigue. His dignified delivery of the book’s descriptive passages perfectly captures the era’s drawing rooms and gentleman’s clubs where stories are shared over brandy and cigars. At the same time, Homewood manages to embody a wide range of characters, giving each its own distinctive voice. Although the story can be melodramatic and over the top, Homewood does such an entertaining job that the listener can just sit back, relax, and enjoy the fun.

The Council of Justice is a critically acclaimed novel by English writer Edgar Wallace, the co-creator of King Kong, who died in 1932. In an understated yet effective performance, Bill Homewood brings Wallace’s work to life. The second novel in the Four Just Men series focuses on four anarchists who believe they are above the law as they protect society. They kill for a greater cause – that of justice. The story is more complex and more intellectual than many contemporary novels, yet Homewood’s methodical style and measured tone help make the dialogue accessible. His narration allows listeners to focus on why four men believe their perspective is more accurate than everyone else’s. The Council of Justice is an excellent introduction to this master writer.

Most thrillers offer the reader an escape into a world where the pursuer of justice, often a detective, is a good person; his quarry a bad one. The stories may be more or less complicated (e.g. John Grisham’s novels), the subjects may be parochial (e.g. Agatha Christie’s novels) or they may involve international intrigue (e.g. Andy McNab’s novels) but on the whole the villain ultimately suffers the consequences of his actions, and justice triumphs.

In his Four Just Men series, Edgar Wallace comes up with something different: the ‘villains’ are not necessarily bad people, and the pursuers of justice – the Four Just Men, as they call themselves – are acting outside the law. They argue that their actions are for the public good, and dispassionately eke the ultimate revenge – death – on their victims. In their turn, the Four Just Men are pursued by the police, but somehow remain our heroes, even garnering the reluctant praise of politicians:

He died penni-
less in 1932,
while working
on the screen-
play of the
film King Kong

‘It is a poetical idea,’ said the phlegmatic Premier, ‘and the standpoint of the Four is quite a logical one. Think of the enormous power for good or evil often vested in one man: a capitalist controlling the markets of the world, a speculator cornering cotton or wheat whilst mills stand idle and people starve, tyrants and despots with the destinies of nations between their thumb and finger – and then think of the four men, known to none; vague, shadowy figures stalking tragically through the world, condemning and executing the capitalist, the corner maker, the tyrant – evil forces all, and all beyond reach of the law. We have said of these people, such of us as are touched with mysticism, that God would judge them. Here are men arrogating to themselves the divine right of superior judgment. If we catch them they will end their lives unpicturesquely, in a matter-of-fact, commonplace manner in a little shed in Pentonville Gaol, and the world will never realise how great are the artists who perish.’

One does not have to look far in adventure films and literature to find glamorous heroes with questionable methods (for example Barry Eisler’s hit-man thrillers with titles like Blood from Blood and One Last Kill, Alexandre Dumas’s The Count of Monte Cristo, Johnston McCulley’s Zorro, innumerable war films of heroic and bloody retribution, and, of course, cowboy classics such as The Magnificent Seven). These appeal to the vigilante in all of us. Who has not dreamed of super revenge on a school bully, an unpleasant teacher, a traffic warden, a treacherous colleague? Perhaps, in twenty-first-century literature, the equivalent of The Four Just Men might be the action stories of our Special Forces heroes on so-called ‘deniable operations’, where we are led to believe that governments prefer to wash their hands of the illegal action – an abduction, an assassination – rather than admit to having ordered it. In such books we love the cautious, wicked methodology of killing – the plotting and creeping, even the dreadful moment itself. What is extraordinary is that we are following these events from the point of view of the assassin, who is honourable only because he is on government duty. It is great fun, and possibly the best sort of holiday reading, to be vicariously criminal. We enjoy suspending the ordinary morality which we apply to our everyday lives in our schools, colleges and workplaces, and replacing it with this ‘naughty’ morality, where the end justifies the means.

George Manfred, Leon Gonsalez and Raymond Poiccart are wealthy Europeans who move easily in high society but, capable of convincing disguise and brilliant acting, are as likely to be found on the street corners of London as at the dinner tables of Paris and Rome. Like Dumas’s Three Musketeers, they recruit a fourth person, and, by means of ingenious plotting and perfect timing, always a step ahead of the police, never fail in their task. They leave false trails and provocative notes, often teasingly pulling off extraordinarily complicated, even ritualistic, murders under the very noses of the police. It is probably the swagger and assurance with which the Four enact their crimes, rather than the justice of the punishment, which attract our awe.

In The Council of Justice, written in 1908, the Four pit themselves against The Red Hundred, an organisation dedicated to international anarchy, led by the mysterious and beautiful assassin, the Woman of Gratz:

The emotion that was within her she conveyed through her wonderful voice. Indeed, the power of the speech lay rather in its delivery than in its substance, for only now and then did she depart from the unwritten text of Anarchism: the right of the oppressed to overthrow the oppressor; the divinity of violence; the sacredness of sacrifice and martyrdom in the cause of enlightenment.

As in the first of the series, The Four Just Men, the Four are pursued by the indomitable Detective Superintendent Falmouth of Scotland Yard:

He was at the same disadvantage he had always been – the Four Just Men were to him names only, symbols of a swift remorseless force that struck surely and to the minute – and nothing more.

Edgar Wallace was born on 1 April 1875. His parents were unmarried actors. Nine days later he was adopted by a fish porter. At 11 years old he started his career selling newspapers on Ludgate Circus, London. After military service he became a journalist, working in South Africa and then London. He was a prolific and popular writer (despite Leon Trotsky’s assessment of his work: ‘It is hard to imagine anything more mediocre, contemptible and crude’). At one time Wallace’s publisher claimed that a quarter of all books read in England were written by Wallace. He lost a fortune on gambling and lavish entertainment. One particular decision was his ruin: a competition in the Daily Mail, which serialised The Four Just Men, in which readers had to solve the mystery. Too many were successful, and Wallace had to underwrite the prize money. He died penniless in 1932, while working on the screenplay of the Hollywood film King Kong. Today a memorial plaque in Ludgate Circus reads: ‘He knew wealth and poverty, yet had walked with Kings and kept his bearings. Of his talents he gave lavishly to authorship – but to Fleet Street he gave his heart.’