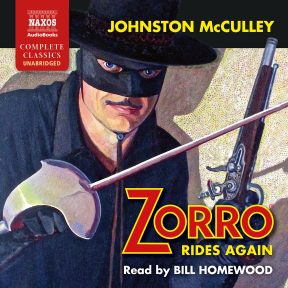 Zorro Rides Again is the third novella featuring Zorro, the Robin Hood of Old California. Reina de Los Angeles is being terrorised by a masked swordsman who marks the faces of his victims with Zorro’s trademark Z. But is this the real Zorro? The Governor of California offers a reward for the capture of Don Diego Vega (who is known to have previously been Zorro) dead or alive, while an army – led by the ruthless Captain Rocha – is in hot pursuit of the outlaw. Assisted by a coterie of allies and the native Cocopah tribe, Don Diego seeks to establish his innocence and unmask the evil imposter.

Dashing swordsman Don Diego Vega, better known as Zorro, comes to life in Naxos’ audiobook Zorro Rides Again, read from the original 1931 Johnston McCulley pulp novel. Though Don Diego had hoped to settle down and marry beloved fiancée Lolita, his reputation and good name are being tarnished by an impostor. Rather than fighting for justice, the false Zorro is instead attacking the innocent, the elderly, and defenseless females.

By returning to the unabridged McCulley text, Zorro Rides Again minimizes more stereotypical or comic perceptions of the mysterious swashbuckling hero. Actor Bill Homewood’s deep British tones alternate with ornately Spanish-accented characters such as Zorro himself, Zorro’s father Don Alejandro, Fray Felipe, and Sargent Pedro Gonzales. Though women are not a major part of this adventure, Homewood voices them with a breathy and occasionally indignant contrast as they try to maintain their highly valued feminine virtues.

Additionally, some of the fight scenes of Zorro Rides Again – whether swordplay or a truth challenge among the Cocopah Indians – have an almost spellbinding quality. Deadly blades clash, clang and cut, or bare-chested men gleam with sweat in a knife battle by a flickering campfire. These intense details are balanced by quieter moments, such as Don Diego’s serene al fresco breakfast of melon, wine, and ‘fish fresh caught in a distant sea’. The audio chapters flow together in serial-like fashion, each ending at an intriguingly suspenseful point in Don Diego’s fierce quest to discover who else dares to wear the famed black Zorro mask.