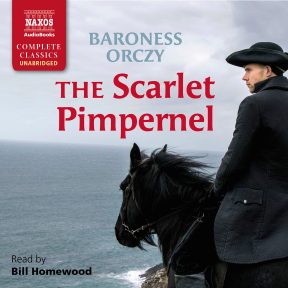 With the Reign of Terror at its peak, and the death toll mounting, France’s violent revolutionaries suddenly find themselves frustrated by a mysterious vigilante. Known as the Scarlet Pimpernel, the enigmatic hero rescues the country’s ill-fated aristocrats from the doom of the guillotine and, with a band of gallant cohorts at his side, whisks them away to safety. Meanwhile, in England, beautiful Frenchwoman and former actress Lady Marguerite Blakeney finds herself drifting apart from her inane and foppish husband Sir Percy Blakeney – until Marguerite’s brother is found to be in league with the Pimpernel and the villainous Chauvelin blackmails her into discovering the true identity of the masked man…

In 1792, with France caught in the Reign of Terror, an elusive English spy has created havoc by dramatically rescuing French aristocrats from the kiss of Madame Guillotine. The search for the Pimpernel is on, and tensions rise as an unwitting betrayal threatens his capture and death. Homewood’s playful and winning characterisations enrich this classic. Sir Percy Blakeney, ‘the richest man in England’ and a fop whose entertaining flummery belies his keen intelligence, speaks in plummy, aristocratic tones. His wife Marguerite’s lively French-accented speech reveals her to be ‘the cleverest woman in Europe’, while the villain Chauvelin absolutely seethes with venom. Homewood conveys passion, drama and deadly peril, along with humour and a great deal of wit. Although there’s a politically incorrect characterisation that will trouble modern listeners, this production makes it easy to see how this stylish novel influenced generations of romantic adventure tales and spy thrillers. Homewood’s jaunty reading is the perfect way to appreciate its pleasures.

Listeners become immersed in the dramatic days of the French Revolution and the rush to save aristocrats by the League of the Scarlet Pimpernel. Through the narration of Bill Homewood, listeners will puzzle over the identity of the Scarlet Pimpernel, agonise with Marguerite over the fate of the brave hero, and worry about the evil plots of the villain Chauvelin. Though the story demonstrates some sexist views of women’s abilities and roles, for the most part, the 1905 work remains enjoyable for today’s audience. Further, through this outstanding audiobook, both unfamiliar listeners and those who have worn out their reading copies will experience the story in a special way.