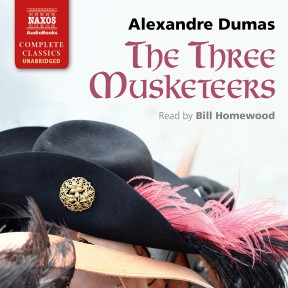 Romance, treachery, courage… The Three Musketeers has it all! In one of the greatest adventure stories ever written, the dashing young swordsman D’Artagnan and his daredevil companions Athos, Aramis and Porthos, become embroiled in duels, love-tangles and sinister intrigues which threaten the future of King, Queen and France herself.

If you’ve been enjoying the BBC’s Sunday evening cowboys-in-black-leathers version of The Three Musketeers, try the real thing with an unabridged narration of Alexandre Dumas’s novel, a bestseller from the instant it was published in 1844 and still going strong (53rd place on Kindle)… Bill Homewood’s ebullient and exciting narration, delivered with crisp Gallic exactness that never slows the pace, is a joy.

Years ago I recorded a cut version of The Three Musketeers for Naxos AudioBooks, abridging the book myself. It has been a privilege to return to this thrilling adventure of travel, war, love and intrigue, and record the whole masterpiece, unabridged. If you do not know the book already, you are in for a treat.

If you are looking for escape, the intrepid d’Artagnan and his three heroic friends Athos, Porthos and Aramis make the best companions! The four are invincible in combat, and irresistible in society. D’Artagnan, of course, is the young lion. He is a great horseman, handsome, brave, impulsive and proud. At the very beginning of the book, Dumas describes his hero with tremendous affection:

A young man − we can sketch his portrait at a dash. Imagine to yourself a Don Quixote of eighteen… face long and brown; high cheek bones, a sign of sagacity; the maxillary muscles enormously developed… the eye open and intelligent; the nose hooked, but finely chiselled. Too big for a youth, too small for a grown man, an experienced eye might have taken him for a farmer’s son upon a journey had it not been for the long sword…

D’Artagnan’s over-riding ambition is to join the King’s Musketeers, and it only takes a couple of daredevil escapades for him to be accepted as an equal by the three finest. Of these, Athos is the doyen, but early in the book we are not allowed much of a description. The first one we meet properly is the vain Porthos:

…[A] Musketeer of great height and haughty countenance, dressed in a costume so peculiar as to attract general attention… A long cloak of crimson velvet fell in graceful folds from his shoulders, disclosing in front the splendid baldric, from which was suspended a gigantic rapier… he spoke with a lofty air and twisted his moustache disdainfully; all admired his embroidered baldric, and d’Artagnan more than
anyone.

Soon after, we meet the delicate Aramis:

He was a stout man, of about two- or three-and-twenty, with an open, ingenuous countenance, a black, mild eye, and cheeks rosy and downy as an autumn peach. His delicate moustache marked a perfectly straight line upon his upper lip; he appeared to dread to lower his hands lest their veins should swell, and he pinched the tips of his ears from time to time to preserve their delicate pink
transparency…

As for the worthy Athos, when we finally meet him he has been injured on the field of battle:

At this instant the tapestry was raised and a noble and handsome head, but frightfully pale, appeared under the fringe…

And that is all we get. However, as the story unfolds, Dumas skilfully builds up a clear image of this most interesting of heroes − layer by layer, more by mystique than by information: aristocratic yet humble, a man of huge integrity and a soldier of great judgement and indomitable courage, Athos is a true leader, and an example to the younger musketeers. His wisdom tempers the impetuousness of d’Artagnan, the vanity of Porthos and the insecurity of Aramis. Athos’s fascinating past becomes more and more integral to the plot and provides one of the most exciting dénouements in literary drama.

Throughout the book, Dumas endears himself by personally escorting the reader in a chatty, self-deprecating style:

Meanwhile, carried away as we are by our narrative, we must leave our three friends to themselves, and follow the Duke of Buckingham and his guide through the labyrinths of the Louvre…

Dumas’ way of describing his leading characters is all the more convincing for the blemishes he mentions:

Anne of Austria was then twenty-six or twenty-seven years of age; that is to say, she was in the full splendour of her beauty… Her mouth was small and rosy; and although her underlip, like that of all princes of the House of Austria, protruded slightly beyond the other, it was eminently lovely in its smile, but as profoundly disdainful in its contempt… her hair… admirably set off her face, in which the most rigid critic could only have desired a little less rouge, and the most fastidious sculptor a little more fineness in
the nose.

The book is set in early 17th-century Paris. Of course we love the courtly gossip, the comedy and scandal, the well-researched historical background and the brilliantly-described pageantry of both French and English courts, in this greatest of romantic novels – but above all it is the fighting and the loving which set the book apart. If there is a flaw our heroes share, it is their profligate excess of affection for the opposite sex. D’Artagnan is as valiant a lover as he is a fighter, and among dramatic heroes shares as much with Henry Fielding’s Tom Jones, as with Shakespeare’s Henry V (both works available on Naxos AudioBooks).

We are privy not only to their philandering, but also to the shameless subtext:

‘Do not overwhelm me with happiness,’ cried d’Artagnan, throwing himself on his knees, and covering with kisses the hands abandoned to him. ‘Avenge me of that infamous de Wardes,’ said Milady, between her teeth, ‘and I shall soon know how to get rid of you – you double idiot…!’ ‘Fall voluntarily into my arms, hypocritical and dangerous woman,’ said d’Artagnan, likewise to himself, ‘…and afterward I will laugh at you…’

‘The Four’ become embroiled in the furious rivalry between King Louis XIII and the sly Cardinal Richelieu. Their swashbuckling interventions in the romantic affairs of the Royal household actually affect the outcome of the bloody struggle for supremacy between England and France, culminating in the Siege of La Rochelle. Only their quick thinking and skill with the sword save them time and again from the sinister schemes of Richelieu and his friend, the beautiful and dangerous Milady Clarik. The tale sweeps inexorably towards the final chapters of the book, when, in scenes as thrilling as they are horrifying, revenges are taken and justice is seen to be done.

Alexandre Dumas wrote or collaborated on nearly 100 plays and many novels, including The Three Musketeers, The Man in the Iron Mask and The Count of Monte Cristo. He was born in 1802, the son of a general in Napoleon’s army and the grandson of a French Marquis and a Saint Domingo Negress. As a child he lived through the upheavals of the Napoleonic Revolution and the subsequent restoration of the monarchy of France. He received his private education from a priest (like Monte Cristo). He was politically active and, though he is thought to have rather embellished the actions in his Mémoires, was involved heroically in skirmishes during the 1830 revolution. He was the father of author Alexandre Dumas (fils), most famous for his La Dame aux Camélias. Alexandre Dumas (père) ran his career as an industry. It is thought that he would sketch the outline of a story to an assistant who would write it up; then Dumas himself would take the story by the throat and wrestle it into a masterpiece. He was a generous, idiosyncratic and fun-loving man. He cooked brilliantly, gave a lot of money away, and spent prodigiously on his private life – most notoriously on various highly publicised affaires and the construction of a monstrous folly of a house at Saint-Germain-en-Laye. He died, just solvent, in 1870.