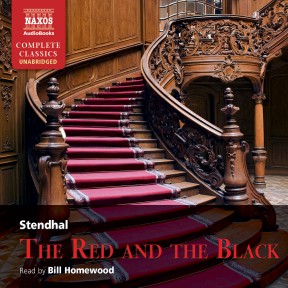 The Red and the Black

Young Julien Sorel, the son of a country timber merchant, carries a portrait of his hero Napoleon Bonaparte and dreams of military glory. A brilliant career in the Church leads him into Parisian high society, where, ‘mounted upon the finest horse in Alsace’, he gains high military office and wins the heart of the aristocratic Mlle Mathilde de la Mole. Julien’s cunning and ambition lead him into all sorts of scrapes, but it is the struggle between his passion for two beautiful women – the quixotic Mathilde and the loyal Mme de Rênal – which ultimately decides his destiny.

The Red and the Black, Stendhal’s story of an ambitious young peasant’s progress through post-Napoleonic France, comes in at just over 22 hours in Bill Homewood’s reading for Naxos. Although his hero is the deposed emperor (the symbolic military “red” of the title), Julien Sorel takes the clerical route (the “black”) up the greasy pole to “those circles which arrogance of the rich calls society”. Homewood’s delicate, thoughtful delivery is well suited to a novel in which the sharp-eyed analysis of everyone’s words and deeds provides watchful commentary on an epic sweep through French society. The novel’s author actually gave his name to an aesthetic condition: “Stendhal syndrome”, a state of ecstasy brought on by the beauty of Italian art.

The Times/Sunday Times Best Audiobooks of the year

Julien Sorel, son of a country timber merchant, parlays his admiration for Napoleon and a successful career in the church into a place in Parisian high society. His cunning and ambition lead him to trouble, and to high military office, but his passion for two women – the aristocratic Mlle Mathilde de la Mole and the loyal Mme de Rênal – finally decides his fate.

H.J. Kirchhoff, the Globe and Mail

Julien Sorel, the son of a country timber merchant, always carries a portrait of his hero Napoleon Bonaparte, and dreams of military glory. More delicate than his bullying brothers, he takes a post as Latin tutor to the children of the Mayor of Verrières, M. de Rênal: a greedy, pompous, vain and sanctimonious man. Young Julien is attracted to, and fascinated by, M. de Rênal’s beautiful wife…

Julien turned sharply round, and, struck by the charm of Madame de Rênal‘s expression, forgot part of his shyness. A moment later, astounded by her beauty, he forgot everything, even his purpose in coming.

Mme de Rênal, even when the plot takes him far away from Verrières, is an ever-present, and redeeming, influence on Julien’s thinking and choices. Their liaison forms the spine of the story, and her admiring devotion to this vain, self-obsessed and ambitious young man is at once surprising and moving: ‘“I have proved myself not unworthy of Julien,” she said to herself, with a sweet and secret relish.’

All the principal characters in the book analyse forensically their own manners and behaviour, and are ever aware of the social implications of a word here, a gesture there, a turn of the head, a costume:

‘My wife certainly has a head on her shoulders!’ the Mayor of Verrières remarked to himself… ‘Although I said so to her, to maintain my own superiority, it had never occurred to me that if I do not take this little priest Sorel, who, they tell me, knows his Latin like an angel, the governor of the poorhouse, that restless spirit, might very well have the same idea, and snatch him from me. I can hear the tone of conceit with which he would speak of his children’s tutor.’

Of course Stendhal pre-dates Sigmund Freud, but the scalpel he takes to his characters’ psyches might be described as Freudian, particularly when it comes to their affections and loves. The hero of Anatole, a play by Arthur Schnitzler, who was a contemporary of Freud, is a similar study of vanity and chauvinistic arrogance in an unlovable, irritating young man. Throughout the history of literature and drama, we have enjoyed laughing at the folly of conceit in young men and women. There are many such examples in Restoration theatre, and, for example, in Chekhov. It is a common misconception that at all times we have to love our heroes, whatever their foibles. The truth is that we can love hating them, too – and that often this is more fun.

Julien Sorel’s relationship with Mme de Rênal is the first of a number of scandals which dog Julien as he pursues his ambitions. He finds a foothold in the Church – a respectable career which he hopes might enable him to move into Parisian high society, as the splendid military career of his dreams seems out of the question for a slight peasant boy. Artful, ever insinuating himself into useful company, Julien gains the support of influential figures in the Church. Still a young man, he at last makes it to Paris. There, while continuing his theological training as a priest, he takes up the post of secretary to the politically influential Comte de la Mole, for whom he carries out a number of difficult tasks, which include diplomatic trips to England and Germany. He is cynically fascinated by the affectations and style of high society, and much of the novel is taken up with Julien’s running analytical commentary to himself on all he sees.

Along the way, the young priest is helped by a number of influential people in both the Church and Society – in particular he owes a great deal to two men: his mentor, the lugubrious Abbé Pirard, and his master, the tremendously powerful and extremely perceptive Comte de la Mole. Despite his country background, Julien soon becomes a sophisticate in bourgeois society, a popular guest at dinner and the opera, an expert in intellectual and literary small-talk, a respectable horseman and even an accomplished swordsman. The Comte’s coquettish snob of a daughter Mathilde becomes his second great passion. She is ‘extremely fair and very comely’, with ‘scintillating’ eyes. ‘“Madame de Rênal, too, had the most beautiful eyes,” he said to himself; “…but they had nothing in common with these.”’ Despite her terror of losing her place in society by forming a liaison with ‘the young peasant’, Julien campaigns brilliantly and…

After prolonged uncertainties, which might have appeared to a superficial observer to be due to the most decided hatred, so hard was it for the feeling of self-respect which a woman owes to herself, to yield to so masterful a will, Mathilde finally became his mistress.

Stendhal’s comic timing and turn of phrase is exquisite and irresistible, especially when it comes to the craft of seduction. On another occasion: ‘Far from responding to her lover’s eagerness, she was like a barely-animated corpse…’

In Paris, Julien, ever aware of the importance of correct dress, is challenged by the extreme subtleties of the dress codes: ‘…By dint of a survey of Count Norbert’s person, Julien discovered that he was wearing boots and spurs; “And I ought to be wearing shoes, evidently as his inferior.”’ Coupled with his arrogance is a strong sense of humiliation about his real social position: ‘“…that class of young people who, born in a lowly and poverty-stricken class, had the chance to educate themselves and the courage to associate with those circles which arrogance of the rich calls society.”’

Julien’s fanatical study of the mores and manners of the time, his cunning and ambition, coupled with naiveté, tortured self-analysis, and an often misplaced sense of duty and honour, entertain and dismay the listener as we accompany him into all sorts of crises of his own making. Finally, ‘mounted upon the finest horse in Alsace’, he achieves the extraordinary rank of ‘Monsieur le Chevalier Julien Sorel de la Vernaye, Lieutenant of the Fifteenth Regiment of Hussars’.

Even as he reflects on this triumph, he receives a letter which pitches him back into the maelstrom he has already created, leading to the novel’s surprising denouement.

The book has been filmed eight times for cinema and television, most famously in 1954 when Claude Autant-Lara’s film, starring Gérard Philipe, won the French Cinema Critics’ Award, and in 1993 when Ewan McGregor starred in a BBC TV mini-series.

In the title, the Red represents the Army, and the Black represents the Church – the choice between on the one hand aspiring to military glory and on the other to Christian humility – the primary struggle in Julien Sorel’s mind throughout the story.

In the printed book, most chapters begin with quotations purporting to be from famous authors. In many cases Stendhal himself wrote the quotations, including the portentous ‘The truth, the harsh truth’ attributed to Dante, with which the book begins. In fact the book’s abiding feature is ‘the truth’. No character is allowed to be perfect, and his or her imperfections are scrutinised mercilessly for their grim dramatic value, in the way a satirical journalist might compose a portrait of an unloved politician. The satire in the book is cruel rather than affectionate; we laugh somewhat guiltily as Stendhal mocks the hubris, the sanctimoniousness, the vanity and the cant of all those Julien encounters, and of our hero himself.

One might be inclined to see The Red and the Black merely as an exposé of the shameful hypocrisy of society in the post-Napoleonic period. France, no longer in the throes of a revolution, once again found itself talking about nothing in particular in the country inns, the churches and the drawing-rooms of Paris. It is a brilliant love story, of course, a fascinating psychological portrait, a highly researched study of manners and an extraordinary social and political history of early-19th-century France. But the book is even more than this:- in the end it is a rueful and chastening look at the human condition, at all of us, with our foibles, jealousies, ambitions and imperfections.

Stendhal was the nom-de-plume of Marie-Henri Beyle, who was born in Grenoble in 1783. His first schoolteacher was a Jesuit priest. He served in the army under Napoleon, but on the restoration of the monarchy moved to Italy, where he started his career as a travel writer. His great love of the Arts, and his declared ecstatic dizziness at the overwhelming beauty and magnificence of Italian paintings, frescoes, statues and architecture, particularly in Florence, led to the recent coining of the expression: ‘the Stendhal Syndrome’. On his return to Paris in 1821 he moved into Society, had several publicized affaires and published The Red and the Black in 1830. The Red and the Black is considered by many to be one of his two masterpieces, the other being The Charterhouse of Parma, also a romance in which the central hero treads a path between the military and the ecclesiastical. He took a diplomatic post in Italy, but in 1841 became ill and returned to Paris, where he died of a stroke in 1842.